Bishops’ conference calls for all Mexicans to work together for peace and to overcome violence, even confronting drug cartels.

MEXICO CITY (CNS) — The Mexican bishops’ conference asked all Mexicans to become peace builders, noting they have even made it their top pastoral priority in the country besieged by drug cartels and criminal gangs.

In a 10-page document released in late January and read in parishes, the bishops said “very grave circumstances of violence and insecurity regrettably persist in different states and cities around the country.”

“We are aware that building peace is a task that requires our permanent attention, and we must perform over the short, medium and long term,” the document said. Among the six pastoral options in the bishops’ pastoral plan for the coming decade, “we prioritized first the ‘option for a church committed to peace and social causes.'”

“We encourage those who govern us to continue acting to weaken the roots of violence with education, social promotion, strengthening the social fabric,” the bishops’ statement said, “but also to cut off criminal influences on all levels of government, make corruption situations transparent, stop the flows of (illegal) financing and weapons, provide the necessary public security and summon all of us in Mexican society to build peace and justice … recognizing that peace will only be achieved with everyone.”

“In some way we are now repeating it because it is precisely the center, the core of the message now that we all have to be builders of peace,” Archbishop Rodríguez said. 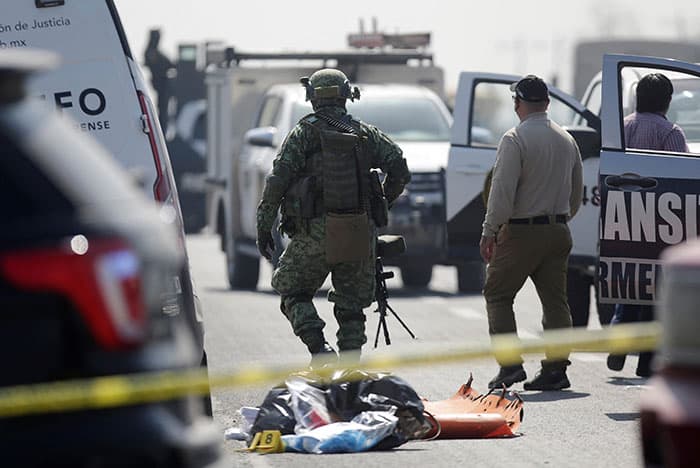 A soldier keeps watch at a crime scene where several bodies were found on the side of a road on the outskirts of Monterrey, Mexico, Feb. 21, 2022. The Mexican bishops’ conference asked all Mexicans to become peace builders in the country besieged by drug cartels and criminal gangs. (CNS photo/Daniel Becerril, Reuters)

“We have to do something for peace,” he added, “not only those who govern, rather all sectors of society. … All of us have much to do with building peace.”

Violence has convulsed Mexico for the past 15 years as a government crackdown on drug cartels has dragged on and criminal groups have splintered and moved into other illegal activities such as extortion and human smuggling. Criminal groups have made uncomfortable forays into politics, too: At least 35 candidates were murdered ahead of the 2021 midterm elections.

Combatting the violence has proved difficult. Archbishop Rodríguez recalled that when he was bishop in the border city of Nuevo Laredo, between 2008 and 2015, “the authorities were in some way colluding” with criminal groups.

The city, opposite Laredo, Texas, remains disputed by drug cartels, which covet it for smuggling drugs to the United States and importing illegal weapons into Mexico, according to analysts. Migrants there often are kidnapped for ransom.

President Andrés Manuel López Obrador has promoted a policy of “hugs, not bullets,” but Archbishop Rodríguez noted, “You don’t see a lot of work in recent years to end the violence. … He is not confronting narcos. There are places where the violence is extreme.”

Priests in the western state of Michoacán have denounced passivity from soldiers and the authorities as drug cartels battle over territories. The then-apostolic nuncio to Mexico, Archbishop Franco Coppola, traveled to Aguililla last April as a show of support for the besieged residents.

The church’s voice in condemning Mexico’s violence has not always sounded loudly, according to church observers, who say priests and bishops are often cowed into silence or prefer not upsetting political leaders.

Featured image: People holding a banner reading “Truth, Justice, Peace. Our home is still covered in blood” take part in a march against violence in Cuernavaca, Mexico, Jan. 23, 2020. In a 10-page document released in late January and read in parishes, the Mexican bishops urged all people to become builders of peace. (CNS photo/Alexandre Meneghini, Reuters)