NEW DELHI (CNS) — Prominent Indian citizens, including Christians, have demanded a repeal of all anti-conversion laws in the country, reported ucanews.com.

“Wherever the anti-conversion law, ironically officially called the Freedom of Religion Act, was passed, it became a justification for the persecution of minorities and other marginalized identities,” said the petition initiated by the National Solidarity Forum, a network of groups and individuals formed in response to the anti-Christian Kandhamal riots in 2007-08.

“The attacks on minorities grew sharply in recent years since this law was used as a weapon targeting the dignity of Christians and Muslims, particularly belonging to Dalits, Adivasis and women,” added the petition addressed to Indian President Ram Nath Kovind. 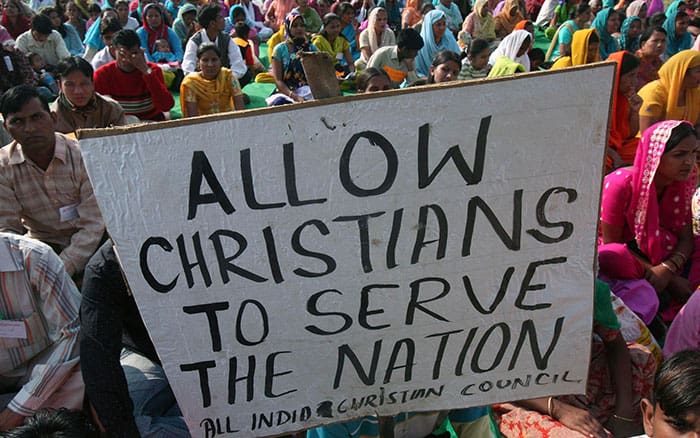 Christians are pictured in a file photo taking part in a protest in Chandigarh, India, against the killings of Christians in Orissa and Karnataka states. Prominent Indian citizens, including Christians, have demanded a repeal of all anti-conversion laws in the country, saying they are used to target minorities. (CNS photo/Ajay Verma, Reuters)

The petition called for joining hands to defend the values enshrined in the Indian Constitution and for protection of human rights of minorities and other marginalized sections in India.

Ram Punyani, National Solidarity Forum convener and social activist, said there have been scattered and sporadic attacks on Christians across India under the pretext of alleged religious conversions by force, fraud, coercion or allurement. These anti-conversion laws were an attempt to intimidate the Christian community, he said.

Ucanews.com reported the appeal was made even as the southern state of Karnataka prepared to finalize its law to prevent religious conversions.

The Karnataka Protection of Right to Freedom of Religion Bill, passed by the legislative assembly Dec. 24, is likely to be introduced before the upper house for its approval before the end of February, ucanews.com reported.

Alva, the former governor of other states, appealed to the National Solidarity Forum to intensify efforts to dissuade the Karnataka government from passing this anti-conversion bill. 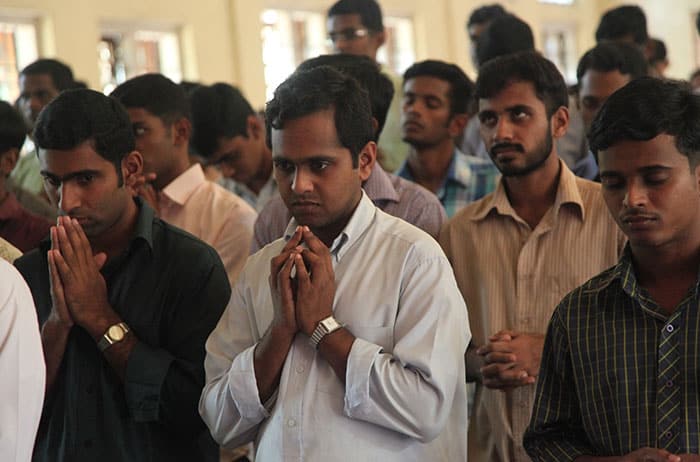 Seminarians pray at St. Joseph Pontifical Seminary of the Syro-Malabar Catholic Church in India’s Kerala state in this 2012 file photo. Prominent Indian citizens, including Christians, have demanded a repeal of all anti-conversion laws in the country, saying they are used to target minorities. (CNS photo/Msgr. John E. Kozar, courtesy of CNEWA)

“I request you to sign this appeal to withdraw the anti-Christian bill and such laws in other states of the country,” she urged Indians of all hues.

John Dayal, a human rights activist and a founder member of the National Solidarity Forum, said anti-conversion laws were not affecting Christians alone but were also meant to further persecute Muslims, Dalits, Adivasis and women in India.

The Karnataka bill makes religious conversion an offense with no bail and has provisions for imprisonment between three to 10 years and fines up to 50,000 rupees ($664).

Similar laws have been enacted or proposed in other Indian states like Uttar Pradesh, Gujarat, Madhya Pradesh and Himachal Pradesh, all ruled by the pro-Hindu Bharatiya Janata Party, which also rules in Karnataka.

Christians make up 1.87% of Karnataka’s population of 68.4 million, ucanews.com reported.

Featured image: Hindu religious women take part in a protest to show solidarity with the nun who was raped during an armed assault on a convent school in Kolkata, India, March 17, 2015. Prominent Indian citizens, including Christians, have demanded a repeal of all anti-conversion laws in the country, saying they are used to target minorities. (CNS photo/Rupak De Chowdhuri, Reuters)