Designating February in their honor, Pope Francis encourages consecrated religious women to stand up for themselves and their ministries.

VATICAN CITY (CNS) — Pope Francis encouraged religious sisters and consecrated women to continue to show courage amid difficulties, even if it means pushing back against the church they serve faithfully.

“I invite them to fight when, in some cases, they are treated unfairly, even within the church; when they serve so much that they are reduced to servitude, at times, by men of the church,” the pope said.

In a video message released by the Pope’s Worldwide Prayer Network Feb. 1, the pope offered his prayer intention for the month of February, which he dedicated to religious and consecrated women. At the start of each month, the network posts a short video of the pope offering his specific prayer intention.

“Let us pray for religious sisters and consecrated women, thanking them for their mission and their courage; may they continue to find new responses to the challenges of our times,” he said.

In his video message, the pope said that without the presence of religious and consecrated women, the church “cannot be understood,” and he called on them “to discern and choose what is best for their mission in the face of the world’s challenges that we’re experiencing.”

“I exhort them to keep working and to have an impact with the poor, with the marginalized, with all those who are enslaved by traffickers; I especially ask them to make an impact on this,” he said.

Pope Francis prayed that religious and consecrated women would continue “to show the beauty of God’s love and compassion” not only through their work, “but above all through your witness of consecration.”

Featured image: Religious hold candles as Pope Francis celebrates Mass marking the feast of the Presentation of the Lord in St. Peter’s Basilica at the Vatican in this Feb. 2, 2017, file photo. The pontiff dedicated February in honor of women religious. (CNS photo/Paul Haring) 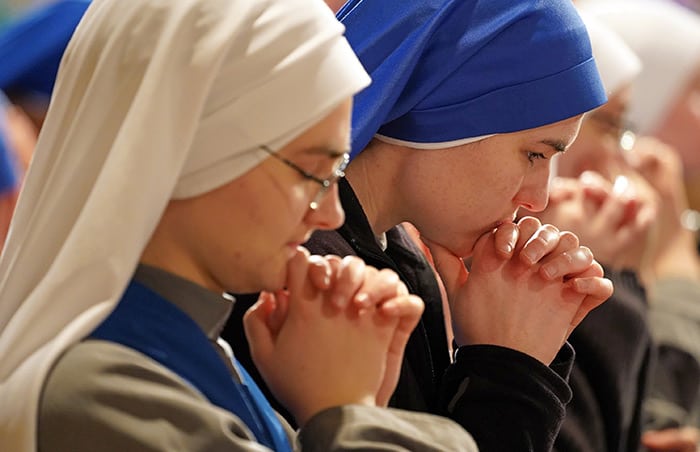 Women religious pray during the opening Mass of the National Prayer Vigil for Life at the Basilica of the National Shrine of the Immaculate Conception in Washington in this Jan. 23, 2020, file photo. In a video message released by the Pope’s Worldwide Prayer Network Feb. 1, 2022, Pope Francis offered his prayer intention for the month of February, which he dedicated to religious and consecrated women. (CNS photo/Gregory A. Shemitz)