On the anniversary of the junta takeover, Myanmar stages a day of noncooperation with government forces.

People from all walks of life in Myanmar observed a “silent strike” in defiance of the ruling junta on Feb. 1, the first anniversary of the military coup.

The junta had threatened legal action against protesters who banged pots and pan, clapped hands and blew car horns — a practice traditionally associated with keeping away evil spirits.

“While millions in Myanmar mark the one-year anniversary of the illegal coup with a silent strike, the rest of us should be raising our voices for a stronger, more responsible international response to a junta that is functioning as a criminal enterprise stealing a nation’s future,” Tom Andrews, U.N. special rapporteur on human rights situation in Myanmar, said on Twitter.

Local authorities forced shops, restaurants and markets to remain open and arrested several owners in Yangon, Mandalay and Pyin-Oo-Lwin for posting on social media that they would close their businesses on Feb. 1, according to local media reports.

The shops remained deserted even though the doors were open due to the overwhelming response to the call from the National Unity Government (NUG) to observe the silent strike between 10 a.m. and 4 p.m.

In Mandalay, the second-largest city of Myanmar, security had been tightened up since Jan. 31. Troops were deployed at every block while private vehicles were subjected to surprise checking by police and military personnel. 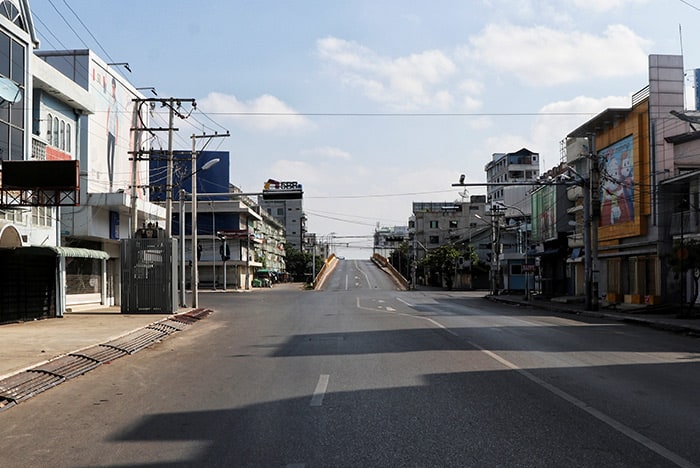 Independent Catholics for Justice in Myanmar, a group of clergy and the laity, urged the faithful to participate in the silent strike that drew comparisons with previous such successful observance to mark Human Rights Day on Dec. 10, 2021.

Myanmar’s coup leaders have extended the state of emergency by another six months to facilitate the promised elections.

“It was necessary to set the right track for genuine, disciplined, multiparty democracy,” military chief Min Aung Hlaing said in a report published by the junta-controlled newspaper Global New Light of Myanmar.

The report said the military would strive to hold new elections once the situation was peaceful and stable but did not mention any dates.

The U.S., Britain and Canada have imposed coordinated sanctions on more individuals linked to the junta from Jan. 31.

In a joint statement, the foreign ministers of countries including the U.S., Britain, Canada and South Korea urged the international community to cease the flow of arms, material, dual-use equipment and technical assistance to the Myanmar military.

The coup one year ago toppled Aung San Suu Kyi’s elected government, abruptly ending a 10-year experiment with democracy. It plunged the Southeast Asian country into political turmoil with nationwide protests and armed resistance to the brutal military crackdown that followed.

Nearly 1,500 people including children have been killed and at least 11,000 people have been detained by the junta so far.

Featured image: People ride a motorbike down an almost empty street as locals stage a “silent strike” in Mandalay, Myanmar, Dec. 10, 2021. People from all walks of life observed another “silent strike” in defiance of the ruling junta Feb. 1, 2022, the anniversary of the military coup. (CNS photo/Reuters)