FLORENCE, Italy (CNS) — European Catholic leaders appealed for peace and expressed alarm about the potential for “a humanitarian catastrophe” after Russia attacked Ukraine.

“In the name of God, stop now!” wrote Archbishop Gintaras Grušas of Vilnius, Lithuania, president of the Council of European Bishops’ Conferences. Writing from a conference in Florence, Italy, he said Feb. 24 that churches in Europe “strongly condemn what happened tonight in Ukraine.”

“We must act together, and with determination, to put an immediate end to the Russian aggression and to do everything possible to protect innocent women, men and children,” the archbishop said. He appealed for renewed dialogue. 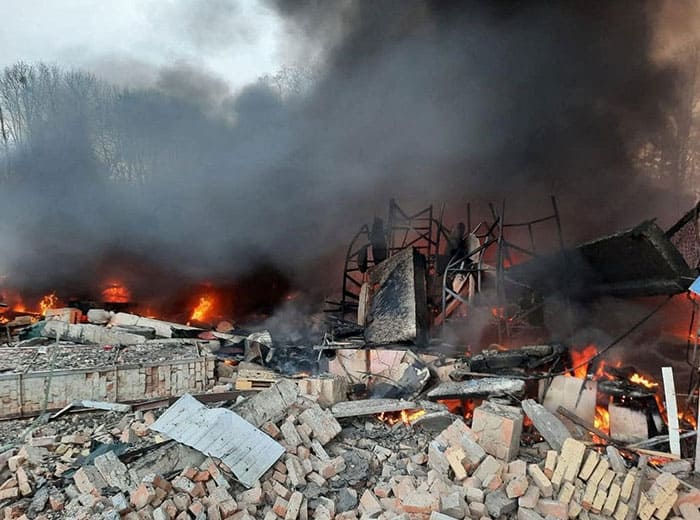 “The European bishops and the Christian communities pray for the victims of this conflict and for their families. They unite with those who are suffering from these acts of violence, and they join Pope Francis’ call for prayer and fasting for peace: ‘May the Queen of Peace preserve the world from the madness of war.'”

Reacting to Russia’s wide-ranging attack on cities across Ukraine Feb. 24, Cardinal Jean-Claude Hollerich, president of the Commission of the Bishops’ Conferences of the European Union, said he was worried that the escalating military actions could open “the alarming scenario of an armed conflict causing horrific human suffering, death and destruction.” Russia had been increasing its troop presence near the Ukrainian borders for months, and already some people had begun leaving their homes. The president of the bishops’ conference in neighboring Poland had urged people to be prepared to welcome refugees.

In his statement, Cardinal Hollerich said in his statement: “In the light of the emerging humanitarian situation provoked by the ongoing hostilities, we appeal to European societies and governments to welcome refugees fleeing their homeland in Ukraine from war and violence and looking for international protection. It is our vocation, our responsibility and our duty to welcome and protect them as brothers and sisters.” 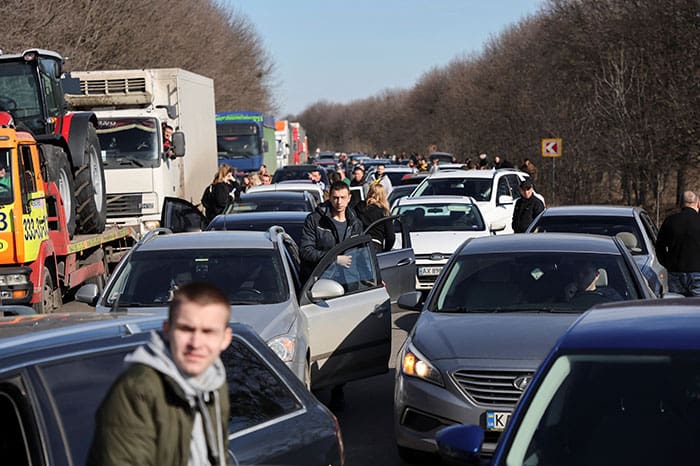 People wait in a traffic jam as they leave the city of Kharkiv, Ukraine, Feb. 24, 2022, after Russian President Vladimir Putin authorized a military operation in Ukraine. (CNS photo/Antonio Bronic, Reuters)

Tetiana Stawnychy, president of Caritas Ukraine, warned Russian actions would “inevitably lead to a colossal humanitarian catastrophe. It is impossible to believe that in the 21st century, in the center of Europe, people have to wake up at 5 a.m. from explosions and the sound of air raid sirens.”

“We need your support to have a chance to respond to the humanitarian crisis and assist the people affected by war,” said Stawnychy.

Before the Russian attacks, Caritas Ukraine had trained staff and volunteers to help meet the needs of the local communities and strengthen their network. They also prepositioned temporary centers to welcome and help people forced to flee their homes. 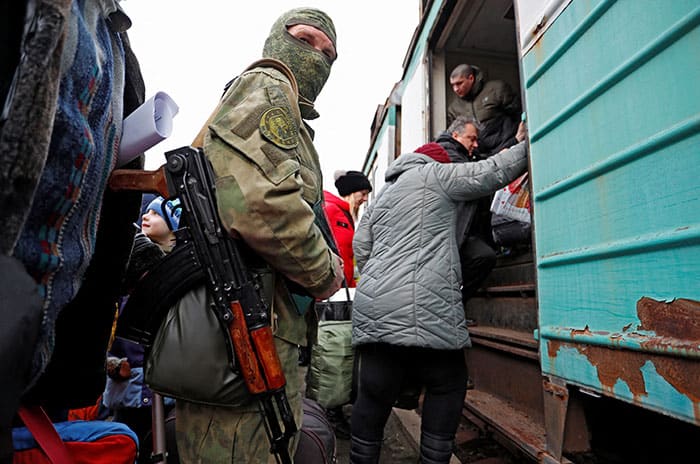 A militant of the self-proclaimed Donetsk People’s Republic is seen on a platform, as evacuees board a train before leaving the separatist-controlled town of Makiivka outside Donetsk, Ukraine, Feb. 22, 2022. During his Feb. 23 weekly audience, Pope Francis said that due to the “alarming” developments in the region, “once again, the peace of all is threatened by partisan interests.” (CNS photo/Alexander Ermochenko, Reuters)

“Before the attack, there were already 2.9 million local people on both sides of the contact line who were in need of humanitarian assistance,” said Stawnychy. “Today, that number is increasing exponentially.”

Russian officials said the attacks in multiple Ukrainian cities only hit military targets, but a Rome-based spokesman for the Ukrainian Catholic Church said Catholic leaders were seeking shelter from the bombing under the cathedral in Kyiv. A Kremlin spokesman said the attacks were not a war, but the “demilitarization and denazification” of Ukraine.

In a joint statement issued after meeting in Bonn, Germany, the heads of Germany’s Protestant and Catholic churches called for an immediate end to the Russian invasion, respect for international law and concrete peace efforts by all parties involved.

He appealed to “all parties to the conflict to do everything possible to avoid civilian casualties” and urged humanitarian help for those displaced by the war.

“The Russian and Ukrainian peoples have a common centuries-old history dating back to the Baptism of Rus’ by Prince St. Vladimir the Equal-to-the-Apostles,” he said. “I believe that this God-given affinity will help overcome the divisions and disagreements that have arisen that have led to the current conflict.”

“Russia must immediately stop military attacks and fully recognize Ukraine’s territorial integrity. Russia’s attack on Ukraine endangers the European peace project,” said Bishop Georg Bätzing, president of the German bishops’ conference, and Annette Kurschus, president of the Council of the German Protestant Churches. “As Christians, we believe that peace is possible and that closed doors can be opened again.”

Video:  The Cardinal Secretary of State after the Russian attack on Ukraine: “There is still time for goodwill and negotiation”.

Featured image: Rescuers work at the crash site of the Ukrainian Armed Forces’ Antonov aircraft, which according to the State Emergency Service was shot down in Kyiv Feb. 24, 2022, after Russian President Vladimir Putin authorized a military operation in Ukraine. (CNS photo/Press service of the Ukrainian State Emergency Service handout via Reuters)