A year into the Biden Administration, the president faces criticism for insufficient progress on immigration.

Immigration supporters say that while they welcomed President Joe Biden’s 2020 election, when it comes to immigration policy, his administration, a year into its first term, has left much to be desired.

“There’s no doubt that the Biden administration is a welcome departure from the appalling cruelty and blatant racism of the Trump years, but in key (immigration) areas, the Biden White House continues to uphold the hateful spirit of Trump migration policies,” Hazel Contreras, of the nonprofit Alianza Americas, said Feb. 1.

The organization was one of various groups to voice discontent with the White House on immigration policy one year after the Biden-Harris administration unveiled its strategy to address immigration flows at the southern border.

From being tied to pandemic health restrictions preventing entrance of some migrants into the U.S., to court battles blocking attempts at unraveling Trump-era immigration policies, the Biden White House has faced obstacles, to be sure. But there are those who say some of the wounds are self-inflicted.

The latest complaints are focused on reports that administration officials are expelling Venezuelan migrants to a third country, namely Colombia, if they recently resided there.

Even Sen. Bob Menendez of New Jersey, a Democrat, came out swinging against the administration Feb. 1.

“The recent reports of the Biden administration removing Venezuelans through third countries is extremely disturbing,” Menendez said in a statement. “By continuing to use a page from Trump’s immigration enforcement playbook, this administration is turning its back on the immigrants who need our protection the most.” 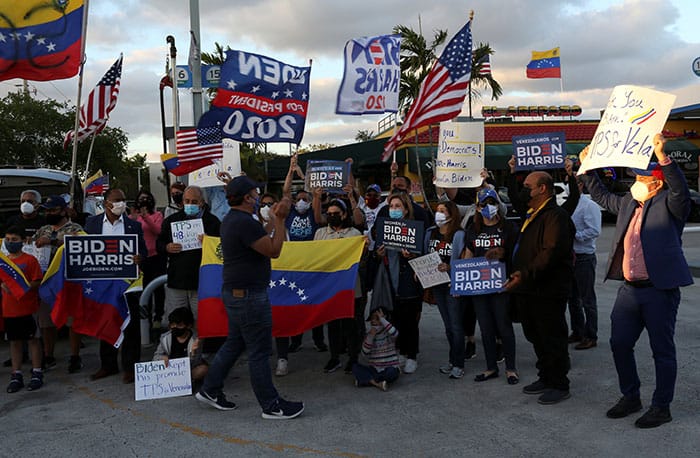 Members of the Venezuelan community in Doral, Fla., react March 9, 2021, after the Biden administration said it would grant Temporary Protected Status to Venezuelan nationals already in the U.S. They had a 180-day period to apply for the status, in place until September 2022, and had to meet certain eligibility requirements to be shielded from deportation and receive work permits. (CNS photo/Marco Bello, Reuters)
He referenced Venezuela’s plight. The country has been embroiled in political conflict and an economy in a downward spiral that has caused more than 6 million Venezuelans to flee the once rich nation since 2014, according to figures from the United Nations.

Many Venezuelans have fled to neighboring countries such as Colombia and Chile, where they have encountered hostility. On Jan. 30, a camp of Venezuelan migrants in northern Chile was trashed following protests against the migrants.

Other Venezuelans have made the longer trek to the U.S., where approximately 323,000 currently hold Temporary Protected Status and more recently have been trying to enter.

TPS, an immigration designation, grants a work permit and reprieve from deportation to certain people whose countries have experienced natural disasters, armed conflicts or exceptional situations so they can remain temporarily in the United States.

But shortly after U.S. Customs and Border Protection said officials encountered more than 13,000 single adults from the country at the U.S.-Mexico border in December 2021, reports began trickling out about deportations of Venezuelans who had lived in Colombia.

Those like Menendez said that while the U.S. has concerns of letting in some migrants during the pandemic, Venezuelans are battling a “brutal dictatorship” at home as well as deteriorating humanitarian conditions.

“While I recognize the importance of carefully managing cross-border travel to facilitate our nation’s pandemic response, now that nonessential travel has resumed at our nation’s borders, the administration should rip off the Band-Aid, end these expulsions and restore the regular processing of asylum claims,” Menendez said.

In late January, U.S. Department of Homeland Security Secretary Alejandro Mayorkas visited the southern U.S. border. On Jan. 27 in El Paso, Texas, he tried to make a distinction between the way the Biden and Trump administrations have handled incoming flows of migrants.

“We have ended policies of cruelty that defined the prior administration,” he said. 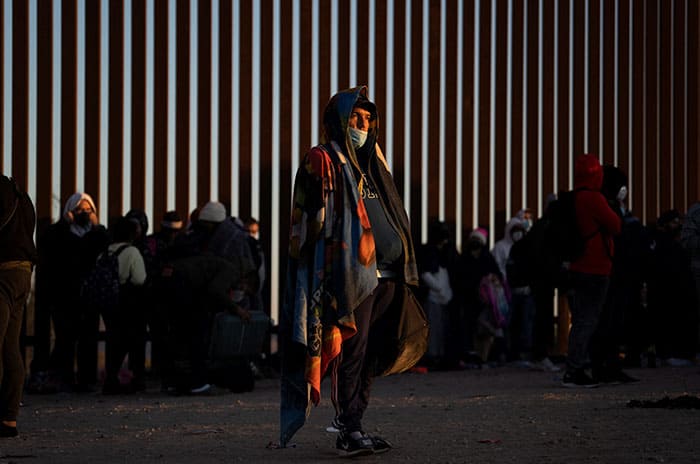 Migrants seeking asylum in Yuma, Ariz., Jan. 23, 2022, stand near the border fence while waiting to be processed by the U.S. Border Patrol. (CNS photo/Go Nakamura, Reuters)

But Menendez, in his statement, said that deporting Venezuelans was a “cruel course of action,” calling it “unconscionable” and said it had to stop.

Alianza Americas also spoke of what it called Vice President Kamala Harris’ “troubling” message during a trip to Mexico and Guatemala in June 2021 when she told would-be migrants: “Do not come.”

“A message that many advocacy groups found troubling, as it does not account for the reality that many asylum-seekers and migrants have little choice in fleeing living conditions that are intolerable,” the organization said.

It also said the U.S. had a moral responsibility to help those fleeing the effects of climate change, mainly from Central America, “given how much the global north, including the United States, has fueled the climate crisis through greenhouse gas emissions.”

The group also voiced disappointment with the administration’s lack of promptly reissuing TPS for Central American countries, calling it “one of the biggest disappointments” of the president’s immigration agenda.

“The Biden administration needs to recommit and reset, in order to uphold its core promise of building a safe, orderly, and rights-respecting immigration system in the U.S.,” said Contreras, of Alianza Americas.

To do that, said El Paso’s Dylan Corbett, executive director of the Hope Border Institute, “we need to recognize that the Biden-Harris administration still has a once in a generation opportunity to change course in Central America and make meaningful change. To do so, this administration will have to recommit to listening and walking alongside local leaders who have a prophetic vision for the future of their communities.”

Eric Schwartz, Refugees International president, said in a Feb. 2 statement that even though Biden administration officials said a year ago they wouldn’t “ignore the humanity” of those forced to flee from their native countries, the U.S. could “do better.”

“We can and must act more fairly, more humanely, and more consistent with human rights standards. Lives are at stake,” Schwartz said.

“The United States must not send people seeking refuge to danger and insecurity or foist the responsibility to protect them on other countries in the region,” he said. “Instead, the United States must comply with refugee law at the border and put an end to the previous administration’s policies once and for all.”

Featured image: Xabiel, 9, a migrant from Venezuela, walks with his brother, Yilber Gabriel, as they join a caravan near Villa Comaltitlán, Mexico, heading to the U.S. border Nov. 20, 2021. (CNS photo/Jose Luis Gonzalez, Reuters)