KURON, South Sudan (CNS) — In a country at war, it’s a region at peace, thanks to a retired South Sudanese Catholic bishop who has championed friendship among those who once saw each other as enemies.

During the civil war between southern Sudanese and the government in Khartoum, Sudan, Bishop Paride Taban was bishop of Torit, working to keep people alive in the middle of a decadeslong struggle. Though imprisoned and beaten by Sudan People’s Liberation Army rebels, he bore no grudges and worked to foster reconciliation when the rebels took power following a landmark 2005 peace agreement.

But Bishop Taban knew political agreements signed by politicians weren’t going to make much difference on the ground, especially among the nomadic pastoralists in his diocese who viewed other tribes as enemies, competitors for the only real thing of value in the parched landscape: cattle. The age-old tradition of cattle raiding, essentially a violent sport that allowed young men to obtain the cows they needed to buy a bride, had been transformed by the addition of high-powered weapons left over from war. What had once produced only occasional injuries from spears now frequently turned into a massacre.

In 2004, Bishop Taban resigned as head of the Torit Diocese. The following year he founded Holy Trinity Peace Village in Kuron, where, as bishop, he had built a bridge over a river that was impassable during the rainy season. While the bridge opened up transport to a neglected area of the country, it posed a dilemma.

“That bridge could be a blessing or a curse,” Bishop Taban, 86, told Catholic News Service. “Before the bridge, cattle raiding slowed during the rainy season because people couldn’t cross the river. With the bridge, they could raid during the rainy season. So we founded the Peace Village there to reconcile people who were calling themselves enemies instead of calling themselves friends.”

The Peace Village received nearly four square miles of land from the interim government. Bishop Taban opened a school and vocational training center, believing that children who studied together were less likely to kill each other when they grew up. The village had soccer matches between youths from warring tribes. It opened a clinic where the sick were healed no matter their ethnicity or language. 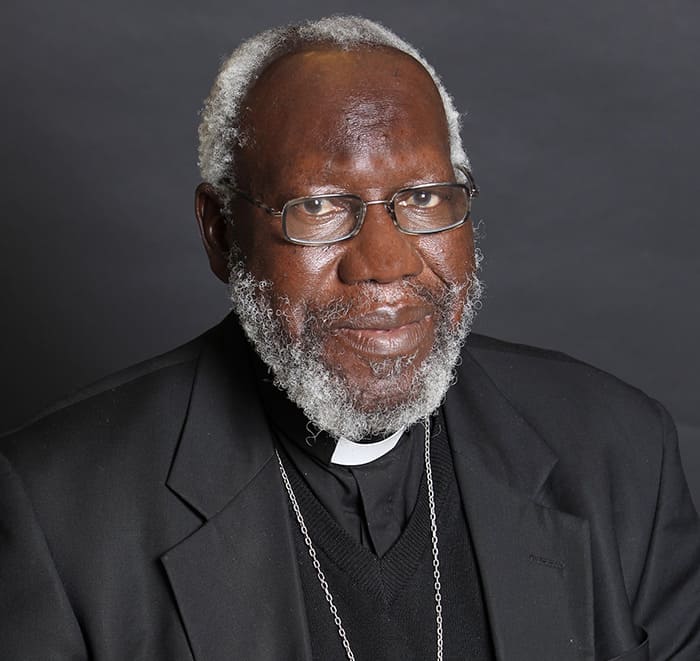 Bishop Paride Taban, retired bishop of Torit, South Sudan, is pictured in a 2010 photo in Washington. The bishop has championed friendship among those who once saw each other as enemies with the establishment of Holy Trinity Peace Village in Kuron, South Sudan. (CNS photo/Bob Roller)

“We asked the youth who were going on raids, ‘Is it like football or wrestling, just to see who is the winner?’ They said yes, but they also said they had to obtain the bride price. If the boys want to marry, they must find the necessary cows. We told them they must stop, and they said, ‘Give us an alternative.’ So we started vocational training. You can make a chair, you can weld something, you can build something and get money and buy your own cattle. And we brought them to school,” said Bishop Taban. “We have succeeded in stopping youth from raiding cattle in big amounts. There is still small-scale raiding, but not much.”

The Peace Village also started people talking. Peace committees were organized in every settlement over a large area in the southeast of the nascent country. Regular meetings provide an early warning system, identifying tensions before they lead to violence.

“The committees work hard,” said Albano Louis, a Toposa chief in Korokochom. “People share their grievances, and we work hard to make life better. Instead of just carrying guns and being afraid, we deal with problems, like hunger, that affect the daily life of the people. We pray for peace, and we think it’s going to work. There is nothing better than peace.”

When talk breaks down and cattle raids do occur, members of the peace committees work to get the stolen animals back, with the raiders often penalized an equal number of animals. In a region where national police seldom tread, the Peace Village has essentially created its own local government.

The introduction of cell service in 2021, after years of lobbying by Bishop Taban, has facilitated communication among villagers and Peace Village staff, allowing them to communicate — and resolve conflicts — much more quickly.

Although it receives international support, the Peace Village is a thoroughly South Sudanese project. This makes it even more important for the country, says Jonas Halvorsen, a Norwegian Church Aid official who has worked with the Peace Village for years.

“This is a local project. It’s a peaceful area in South Sudan where various ethnic groups coexist in peace because of a structure built by the South Sudanese themselves. It’s an inspiration for the rest of the country,” he said.

The schools created by the Peace Village are central to its mission, but getting children to attend is a tough sell in pastoralist communities, where children are part of a labor force that cares for goats and cows and spends long hours scaring birds away from fields ripe with sorghum. But Father Henry Gidudu, the director and chaplain of Kuron’s St. Thomas Primary School, takes student ambassadors to remote villages where they persuade recalcitrant parents to let their children try school.

“We get children from the Toposa, Murle, Jie, and other tribes, and they come here seeing each other as enemies. Yet they soon come to see each other as friends, learning values that bring them together. At home, they emphasize revenge. In the school, we teach forgiveness,” he said. 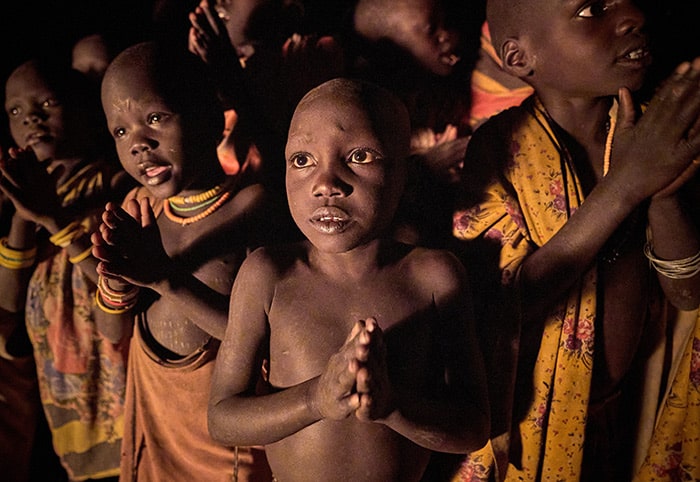 Children pray and sing during a nighttime prayer vigil for peace Oct. 1, 2021, in Nakubuse, a small village near Kuron in South Sudan’s Eastern Equatoria state. Bishop Paride Taban, retired bishop of Torit, has championed friendship among those who once saw each other as enemies in the area. (CNS photo/Paul Jeffrey)

Women are key protagonists of change in the Peace Village. Although they don’t participate in cattle raiding, they can discourage it.

“The bishop tells us that, as women, we have a responsibility to bring our children to the school, and that we have to talk to our men about stopping the violence and living in peace,” said Mary Logie, a member of a women’s group in Kuron.

“Violence in our homes was worse before the Peace Village raised questions about gender-based violence. Before, when people wanted to marry a girl at a very young age, the mother would object and her husband would beat her. But that’s changed. Now we can talk about those things, and there’s no violence against the woman,” she said. “The girl may still get married, though not at such a young age as before.”

Logie says she has had long talks with her husband about cattle raiding.

“I tell him that I don’t want him to go on raids, but rather to focus on our children so they’ll go to school. Since then, he doesn’t go on raids. The community calls him a coward. Yet I tell him I love him because he is a coward. And I say he can’t go on a raid because if he gets killed, who will I love?”

Bishop Taban said the Peace Village has tried to respect the pastoralists’ culture while at the same time working to end violence and improve the quality of their lives. He said he’s been guided by advice that was given by the Toposa when the first Catholic missionaries came to the area in 1935.

“The Toposa asked, ‘What are you coming here for?’ The missionaries responded, ‘We are bringing the word of God.’ They said they were free to do so, but there were two things they wouldn’t allow. ‘Don’t touch our animals. And don’t touch our women.’ They made clear that if you want to be a friend of theirs, you will respect their animals and women. And they have let us missionaries enter their homes, with no suspicion, because we respect their women and animals,” the bishop said.

Yet change can occur in unexpected ways, Bishop Taban reported.

“One day they saw an airplane land on our airstrip, and they saw a lady pilot get out. They said, ‘What? A lady? Piloting the plane?’ We said, “Yes, and with her salary she can buy 50 to 100 cows a month.” They said, ‘Wow!’ And that is how we started getting girls in school. Because they realized that when they’re educated, girls can get money. And with that money they can buy more cattle every month. Now we have more than 50 girls in primary school, and even more in secondary school,” he said.