More than 59 million people in the region suffered from hunger in 2020.

ROME (CNS) — A report released by several U.N. agencies warned that the number of those suffering from hunger in Latin America and the Caribbean is at its highest point in 15 years.

According to the “Regional Overview of Food Security and Nutrition 2021,” published in late November, an estimated 59.7 million people in the region suffered from hunger in 2020. That was a 30% increase, or 13.8 million additional people, compared to 2019.

The new statistics, the report stated, reveal “a bleak scenario for the future of the region.”

It also reported an increase in food insecurity, stating that 41% of the region’s population is “moderately or severely food insecure, which translates to 267 million people whose human right to food is not being met.”

In South America, the number of those suffering from hunger increased by 18 million people between 2014 and 2020. However, the report said half of the increase, an estimated 9 million people, “occurred between 2019 and 2020 in the context of the COVID-19 pandemic.” 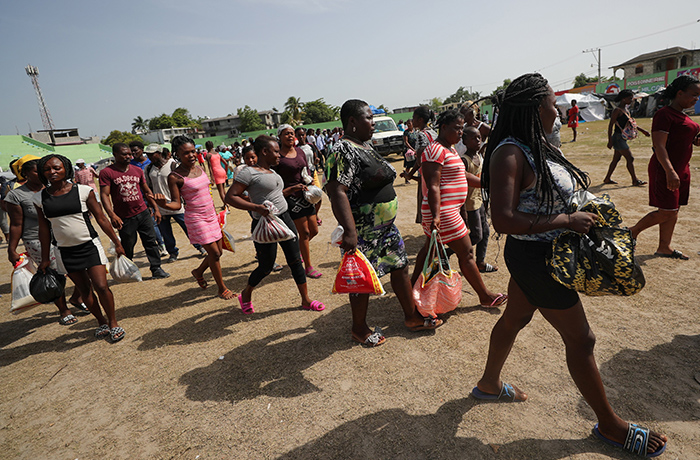 Residents who were evacuated from their homes after an earthquake walk after receiving food at a stadium in Les Cayes, Haiti, in this Aug. 23, 2021, file photo. A report released in late November by several United Nations’ agencies warned that the number of those suffering from hunger in Latin America and the Caribbean is at its highest point in 15 years. (CNS photo/Henry Romero, Reuters)

“This suggests an increase of 36% in the number of people living with hunger in just one year,” it said.

Among the countries with the highest numbers of people suffering from hunger in Latin America and the Caribbean are Haiti, Venezuela, Guatemala and Nicaragua.

The report also stated that the COVID-19 pandemic has “exacerbated” the problem of hunger, food insecurity and malnutrition, due to the fact that it has “reduced the incomes of millions of people in the region.”

“However, the pandemic alone is not responsible for all these setbacks, as the regional statistics for hunger have been increasing for six consecutive years,” it said.

In a statement released Nov. 30 following the report’s publication, Julio A. Berdegué, the U.N. Food and Agriculture Organization’s regional representative for Latin America and the Caribbean, called for action to stem the growing trend.

“We must say it loud and clear: Latin America and the Caribbean (are) facing a critical situation in terms of food security,” he said. 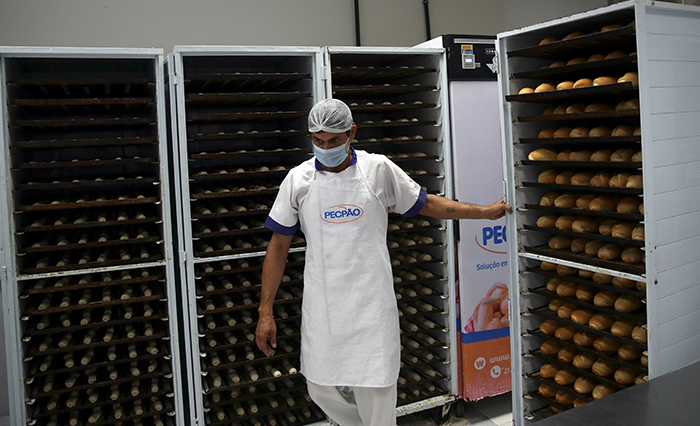 A baker works at a bakery at the Sanctuary of Our Lady of Fatima, where bread is produced to be distributed to vulnerable people due to food insecurity, during the COVID-19 outbreak, in Rio de Janeiro June 2, 2021. A report released in late November by several United Nations’ agencies warned that the number of those suffering from hunger in Latin America and the Caribbean is at its highest point in 15 years. (CNS photo/Ricardo Moraes, Reuters)

While the number of those who suffer from hunger increased, the report also stated that in other parts of the region, the battle against other forms of malnutrition, including obesity, is being lost.

In Latin America and the Caribbean, an estimated 106 million people, or one in every four adults, suffer from obesity. Between 2016 and 2020, the prevalence of obesity increased 9.5% in the Caribbean, 8.2% in Mexico and Central America and 7.2% in South America.

Furthermore, the number of overweight children continues to rise, with an estimated 3.9 million obese children, 7.5% of whom are under 5. The number, the report said, is nearly 2% above the world average.

The report said that the new statistics will contribute to “policy dialogue for post-pandemic recovery, which is fundamental to closing gaps in equality and meeting the goals of the 2030 Agenda for Sustainable Development.”

“We cannot reverse these trends unless we transform our agri-food systems to make them efficient, resilient, inclusive and sustainable enough to provide a healthy diet for everyone, leaving no one behind,” the report said.

Featured image: People affected by an earthquake wait for food provided by the World Food Program, at a school in Port Salut, Haiti, in this Aug. 24, 2021, file photo. A report released in late November by several United Nations’ agencies warned that the number of those suffering from hunger in Latin America and the Caribbean is at its highest point in 15 years. (CNS photo/Ricardo Arduengo, Reuters)