VATICAN CITY (CNS) — Meditating on the scene of the Holy Family fleeing to Egypt to escape Herod’s murderous rage, Christians cannot close their eyes to the fact that too many people in the world today also feel forced to flee their homelands, Pope Francis said.

“Herod is a symbol of many tyrants of yesterday and today; for these tyrants, people don’t matter, power matters, and if they need space or power, they eliminate people, and this is happening today. We don’t have to go to ancient history” to find such examples, the pope said Dec. 29 at his weekly general audience.

Continuing his series of audience talks about St. Joseph, Pope Francis focused on Joseph’s courage in taking Mary and the baby Jesus to Egypt to escape Herod, and he compared St. Joseph’s bravery to the courage of migrants and refugees who leave their homelands to protect and help their families.

As he has been doing since he began the series, the pope ended his talk with a prayer to St. Joseph, who “experienced the suffering of those who must flee to save the lives of those dearest to them.”

“Protect all those who flee because of war, hatred and hunger,” the pope prayed. “Support them in their difficulties, strengthen them in hope, and let them be met with welcome and solidarity.”

The Holy Family experienced the same “precariousness, fear and pain of having to leave their homeland” as migrants and refugees do today, he said. “Still today, many of our brothers and sisters are forced to live through the same injustice and suffering. The cause is almost always the arrogance and violence of the powerful.”

Anyone can become a “little Herod,” he said. It happens “every time we try to dispel our fears with arrogance, even if only verbal,” or do something meant to humiliate someone.

Joseph is the opposite, though, the pope said. He had the courage to follow the angel’s prompting to set out in search of safety, even if that meant going to a foreign land where a different language was spoken. 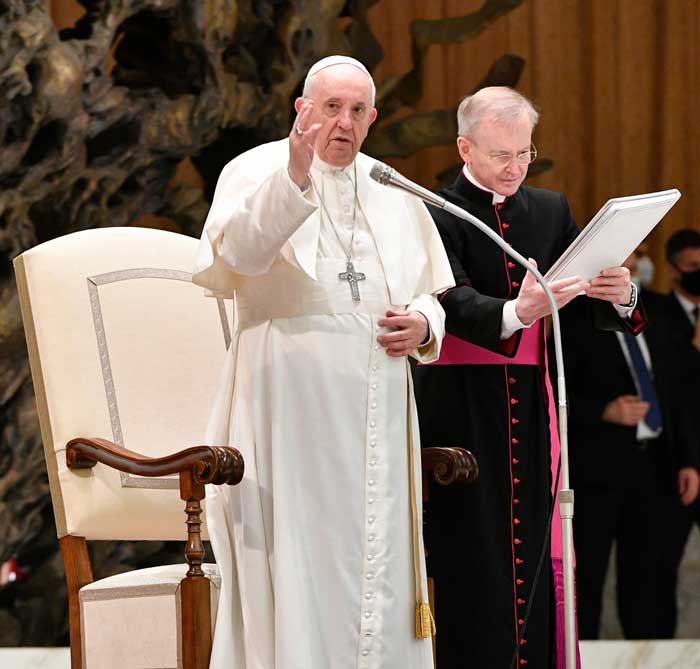 Pope Francis gives his blessing at the end of his weekly general audience Dec. 29, 2021, in the Vatican’s Paul VI hall. (CNS photo/Vatican Media)
Everyone will face some adversity in life, and that can make them feel threatened and afraid, he said. But unlike Herod, who responds with violence, St. Joseph reacts “with the courage to trust in God’s providence.”

Pope Francis asked people at the audience to pray for “migrants and all the persecuted, and all those who are victims of adverse circumstances, whether political, historical or personal.”

Greeting Polish speakers, he said: “We pray the coming year will be a happy one for us and for all people, that the pandemic will end, and we can enjoy peace in our hearts, in our families and societies, and in the world.”