When Leonardo Mamani Villa started school at 6 years of age in Tacopaya, an indigenous town in the remote rural highlands of Cochabamba in the Bolivian Andes, he struggled. Leonardo, whose first language is Quechua, had to learn to read, write, count and express himself in Spanish. He found a tutor and a friend in Maryknoll Lay Missioner Phuong Minh Nguyen, who offers an after-school program for children at the parish house in Tacopaya.

Every afternoon, Nguyen welcomes more than 20 energetic children like Leonardo. They run up to the front door calling her name, “Minh, Minh!” The children do their homework on the patio and read books or play games in the library room.

“I like when Minh teaches me how to read and count,” Leonardo says. After a year of attending the after-school program, Leonardo showed progress. He has learned Spanish, and also how to read, add, subtract and multiply. Nguyen, who arrived at Tacopaya in 2018, says the program fills in academic gaps for the children. “Many of them go to the next grade not having the basic education and they don’t know anything about math or reading.” 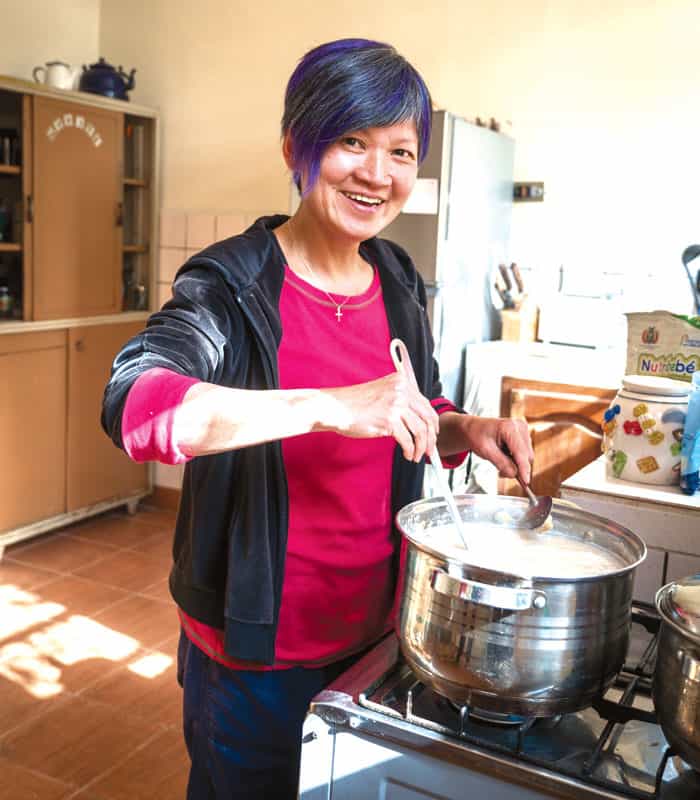 Josue Silvestre Vicente, 12, is another boy who touched the missioner’s heart. He has trouble with pronunciation and is very shy. When Josue was in fourth grade, he didn’t know how to read, write or do math. Josue approached the missioner and asked for help. Nguyen has worked with him for three years. He is now in seventh grade at a Catholic school, where his work is considered on a par with other students.

Tacopaya’s young pupils study under a variety of circumstances. Some students, like Josue, live with their families at their homes in Tacopaya. Other students, like Leonardo, reside at Catholic boarding schools, and either attend classes there or at government-run public schools. Nguyen explains that her after-school program is open to all children in the community.

Leonardo’s parents are subsistence farmers living in an even more remote region of the Andes. If Leonardo and his two brothers were not helped by the Catholic boarding school, they would have to walk more than four hours each day to school and back. In her program, the missioner tries to fill the space left by their parents’ absence and make these children feel at home. Every day, she prepares a warm and nutritious snack, such as oatmeal with milk. 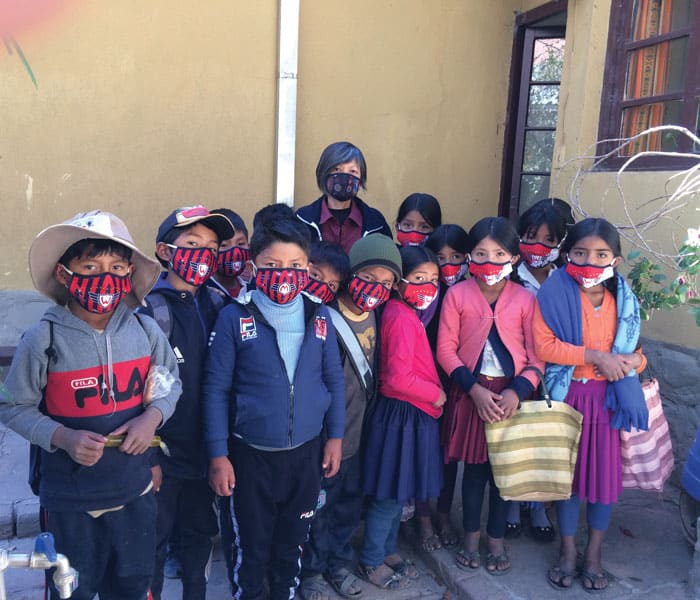 For Nguyen, it is important to keep students in the countryside. Many young people leave for the city to look for work, she explains. Sometimes children and the elderly are the only ones who remain in their villages. When people move from the campo, or countryside, to the city, “they lose their identity, trying to adapt and survive in a different environment,” she says. “In the city, they are afraid to speak their mother tongue and to practice their culture. They have fresh and pure air here and we are helping their education.”

Father Hector Terrazas, a former local pastor, made the parish house available to Nguyen for the after-school program. He also supported efforts to curtail migration to the cities. The schools at Tacopaya serve children from about 100 surrounding communities where their families face problems such as the shortage of water and insufficient food production. Most are farmers and generally grow only potatoes. “We are presenting an agroecology project that includes forestation with pine trees and fruit plants using micro irrigation to improve the production of other foods,” Father Terrazas said.

Nguyen, 57, enjoys her ministry with the children in Tacopaya. “When I was a kid in Vietnam, I was born in poverty,” she says. “I know how it is to have a wonderful childhood living out in nature with freedom, but I also endured many hardships in my life.”

Nguyen was 23 when she and her family left Vietnam for the United States, but she and a sister were separated from the family in Thailand and sent to a refugee camp in the Philippines. (Back then, the U.S. government required that those 21 years old or older go first to a refugee camp to study language and culture before entering the country.) She and her sister were reunited with their parents and three young siblings six months later. 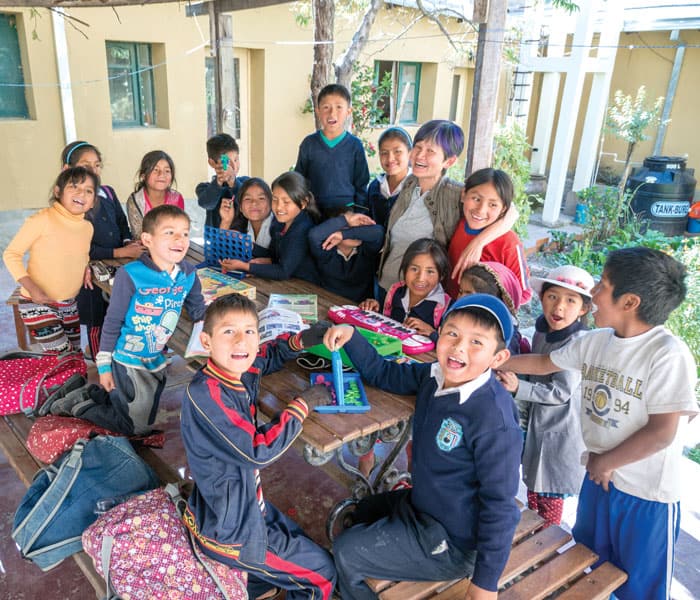 Nguyen joins efforts of the local church to provide education to children in the countryside to prevent them from migrating to the city of Cochabamba. (Nile Sprague/Bolivia)

“It was like being torn away,” Nguyen says. “I left my country, my friends and everything and then was abruptly separated from my parents and siblings. It was really hard. But at the same time, I feel that it was the beginning of my journey to feel for others.” Arriving in the United States, Nguyen struggled to fit in as an American. Later on, she says, “I learned how to treasure the two cultures and realized the enrichment they bring.” She lived in Baltimore, Maryland, and worked as a licensed cosmetologist while also volunteering in her parish.

In discerning her call to mission, Nguyen learned to trust in God’s providence, she says. In 2010, she joined Maryknoll Lay Missioners and was assigned to Bolivia. She first served in Cochabamba at the Madre de Dios Home for abused and abandoned girls. She also used her cosmetology skills: teaching hair cutting to inmates at the San Pablo men’s prison and hairdressing in a certificate program at San Sebastian women’s prison for inmates to acquire job skills. 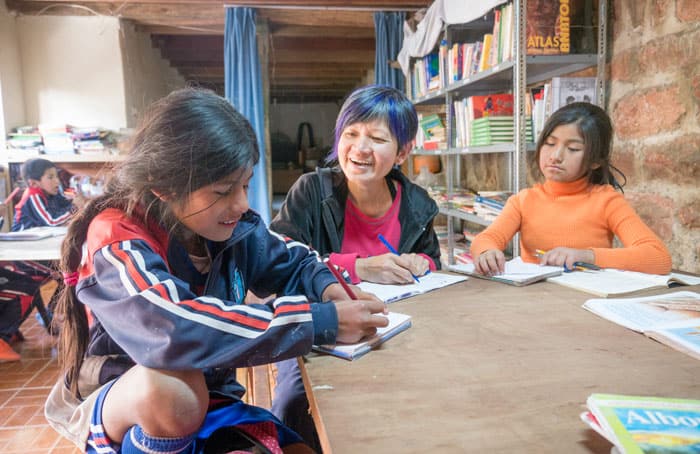 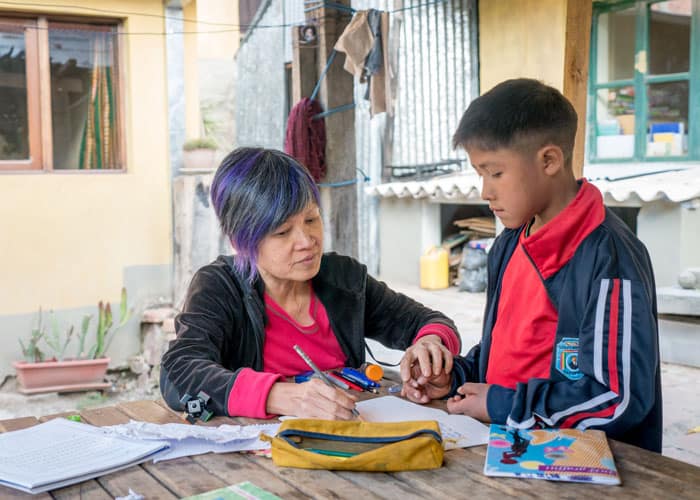 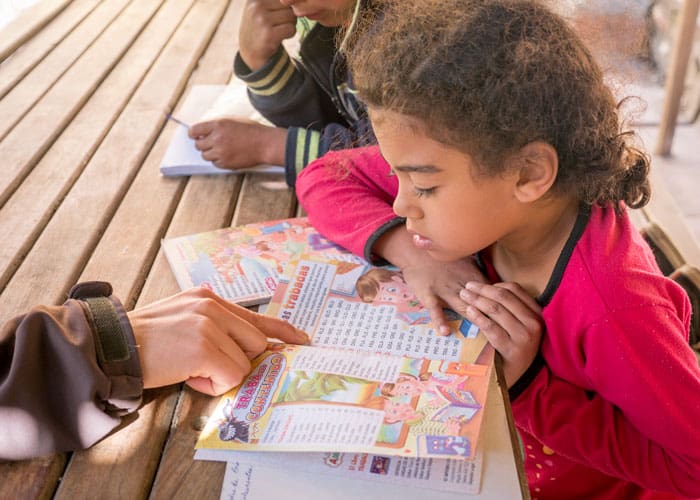 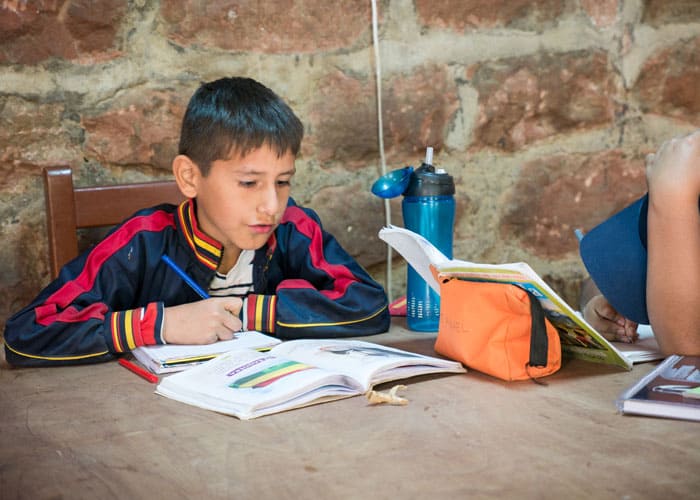 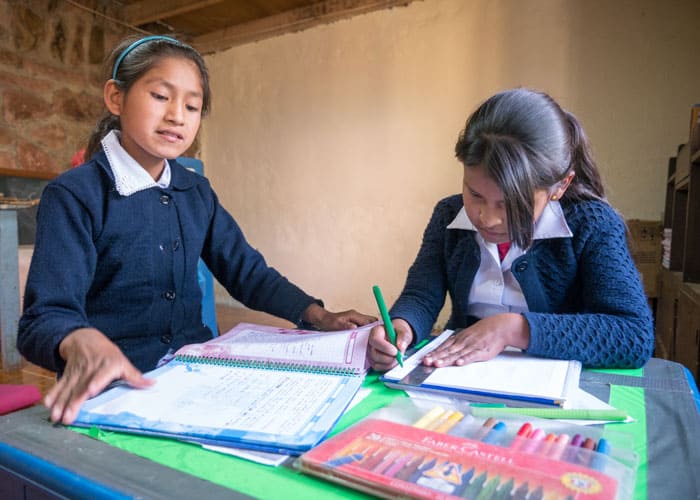 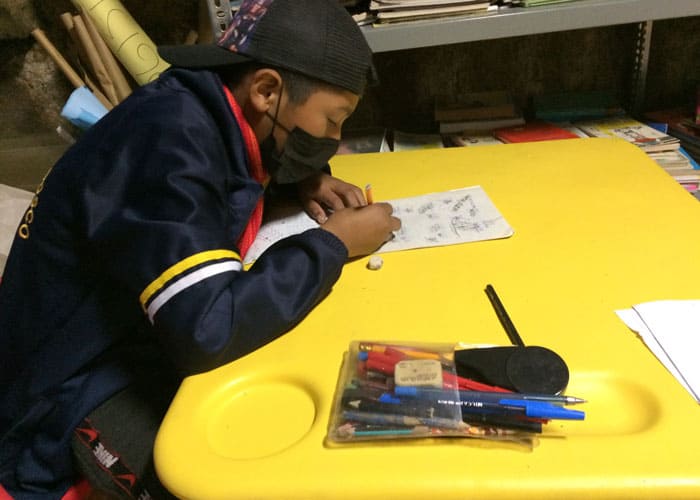 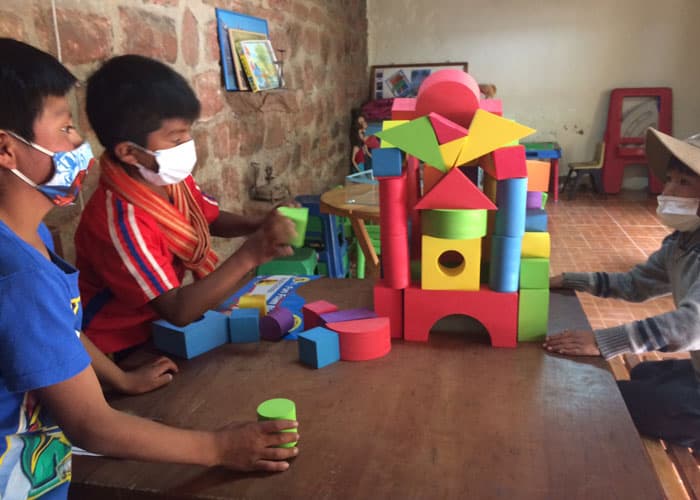 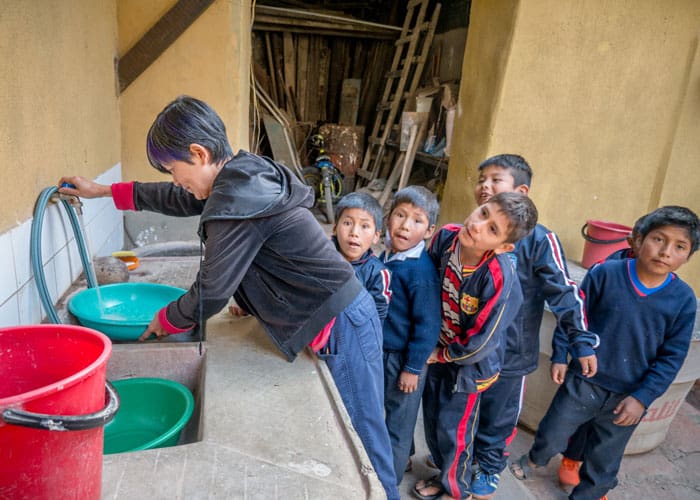 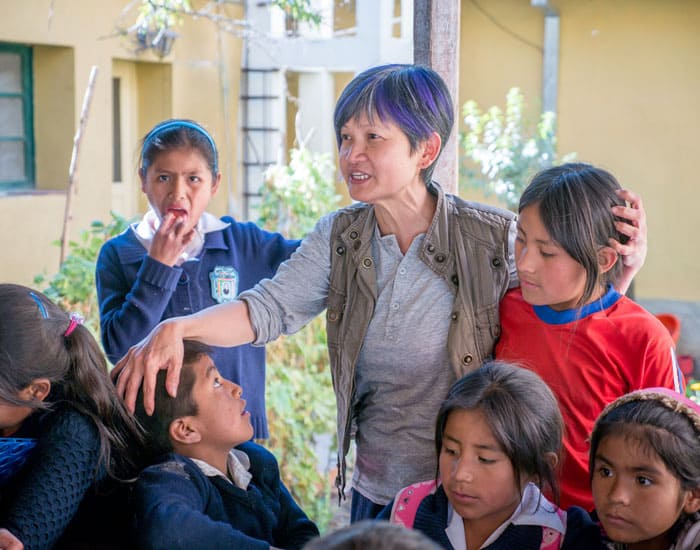 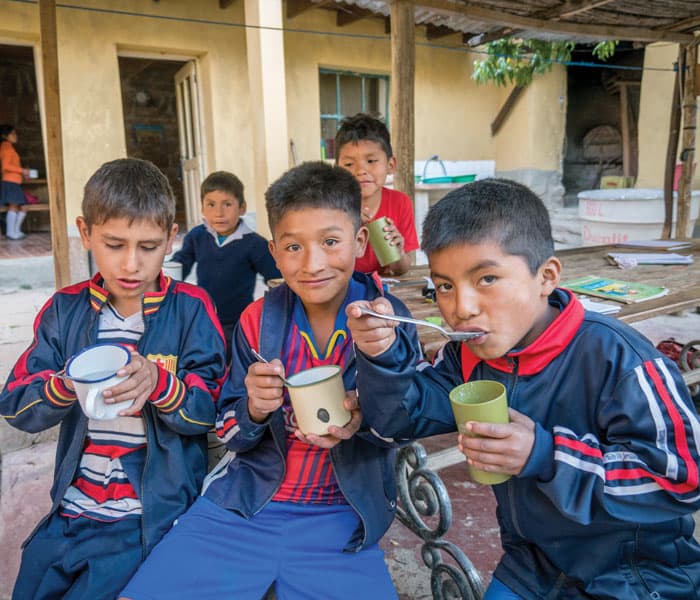 Children attending the after-school program enjoy a nutritious snack of oatmeal and milk, prepared by Lay Missioner Nguyen at the parish house in Tacopaya. (Nile Sprague/Bolivia)

Nguyen kept visiting the prisons and children’s home in the city of Cochabamba until the pandemic limited travel. The missioner says a nurse at the local clinic in Tacopaya recently reported more than 60 cases of COVID-19 and three deaths, but actual numbers could be more.

Of her current ministry, Nguyen says her reward is helping children like Leonardo, who is now 9 years old and a bright student, and Josue, who learns and gains more confidence each day. “I teach them not to give up, and I tell them: ‘You can do it, just try and you will see,’ ” she says. “At the beginning it’s hard to convince them, but when they get it, they are so happy and they make me happy, too.”

Reflecting on her journey, Nguyen realizes God had prepared her for mission. “For me to get where I am now, I know God gave me the love to make it possible … to feel for my brothers and sisters,” she says. “That is the first gift he gave me; without love nothing is possible.”