Look in the Mirror before Correcting Others, Pope Says

Let yourself be guided by the Holy Spirit in meekness, patience, prayer, and accompaniment, pope says in weekly general audience.

VATICAN CITY (CNS) — To believe in Jesus means to follow him and avoid going “the opposite way,” following one’s own interests and inflating one’s own ego, Pope Francis said.

Similarly, when Christians see one of their brothers or sisters has strayed, they must be humble, gentle and compassionate, the pope said Nov. 3 during his weekly general audience in the Paul VI audience hall.

“The supreme rule regarding fraternal correction is love: to want the good of our brothers and sisters” by praying, being patient and accompanying them to help them correct themselves, he said.

However, he added, “this is not easy. The easier path is tattling, skinning the other alive as if I were perfect.”

The pope continued his series of talks on St. Paul’s Letter to the Galatians by reflecting on an excerpt from the apostle’s exhortation on the “freedom of service,” that is, how Christians are called to fulfil the law by loving their neighbor and by walking in the Holy Spirit.

“Walking in the spirit” is letting oneself be guided by the Holy Spirit, following the path of Christ, the pope said. 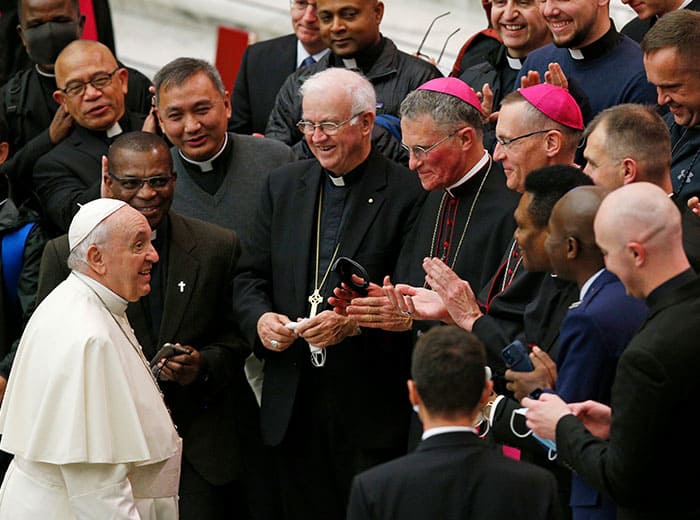 Pope Francis is pictured with U.S. military chaplains during his general audience in the Paul VI hall at the Vatican Nov. 3, 2021. (CNS photo/Paul Haring)

This “stupendous but difficult journey” begins in baptism and lasts an entire lifetime, he said. “We can think of it as a long excursion on the mountain heights: it is breathtaking, the destination is attractive, but it requires a lot of effort and tenaciousness.”

No matter the challenges, difficulties and temptations to sin along the journey, Christians are able to acquire “a positive vision of life” because they know, no matter what, “God is always stronger than our resistance and greater than our sins,” he said.

St. Paul also shows what a good disciple does by putting himself at the same “level” as the Galatians and including himself in God’s command that “we” — not just “they” — must all walk according to the Spirit, the pope said.

The apostle knows “this exhortation is necessary for himself as well,” he said.

“The apostle does not place himself above his community,” Pope Francis said. “He doesn’t say, ‘I am the boss … I have reached the mountaintop and you all are still walking.’ He doesn’t say this, but he places himself in the midst of the journey everyone is on in order to provide a concrete example of how much it is necessary to obey God, corresponding better and better to the Spirit’s guidance.” 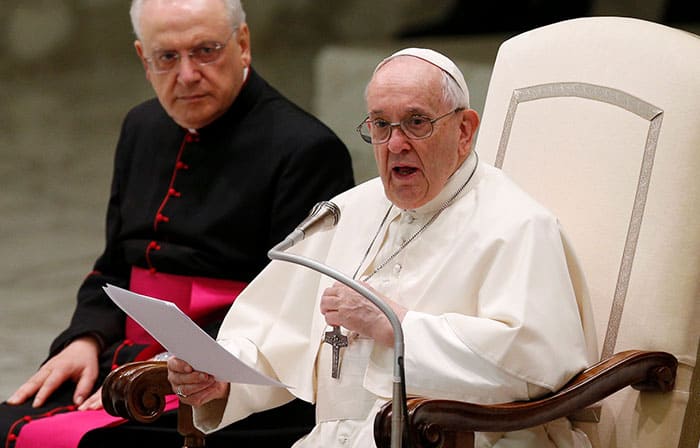 Pope Francis delivers his talk during his general audience in the Paul VI hall at the Vatican Nov. 3, 2021. (CNS photo/Paul Haring)

“Walking according to the Spirit is not only an individual task — it also concerns the community as a whole,” which is “exciting, but demanding,” he said.

Everyone in the community must “bear each other’s difficulties,” because everyone has the same temptations, “that is, our jealousies, prejudices, hypocrisies and resentments” and the temptation to seek out “a rigid set of precepts” as the solution, he said.

St. Paul said, “If someone should make a mistake, use gentleness,” and “Look to yourself, lest you too be tempted,” the pope said.

“How easy it is to criticize others,” Pope Francis said. “There are some people who seem to have a degree in tattling, criticizing others every day. Hey, look in the mirror” and reflect on one’s own weaknesses and fragility.

Instead of gossiping or tearing the other down, the Spirit points the way of humility and being gentle with one’s brother or sister in correcting them, but it is also “good to ask ourselves what drives us to correct a brother or a sister, and if we are not in some way co-responsible for their mistake,” he added.

Being in solidarity with others is to bear the other’s burdens, and “how many burdens there are in a person’s life: illness, lack of work, loneliness, pain! And how many other trials that require the proximity and love of our brothers and sisters!” he said.

Commenting on this teaching, St. Augustine said others must be corrected “‘with gentleness. And if you raise your voice, love within. If you encourage, if you present yourself as a father, if you reprove, if you are severe, love,’ always love,” Pope Francis said.

Often, the pope said, this also means tolerating people’s problems and defects “in silence and in prayer in order to find the right path for helping them correct themselves.”

“Meekness, patience, prayer, accompaniment” are the keys for walking with “joy and patience along this path, allowing ourselves to be guided by the Holy Spirit,” he said.

Featured image: Pope Francis greets the crowd as he arrives for his general audience in the Paul VI hall at the Vatican Nov. 3, 2021. (CNS photo/Paul Haring)