CELAM, at meeting in Mexico Nov. 21-28, seeks to confront erosion of democracy from parties and leaders on the left and right in Latin America.

MEXICO CITY (CNS) — Police regularly patrol outside the parish where Msgr. Carlos Áviles celebrates Mass in Managua, Nicaragua. He calls it an act of “intimidation” for his outspokenness about political matters. It also fits a pattern of harassment against the Catholic Church in Nicaragua from a government that has branded priests “terrorists.”

What is happening in Nicaragua showcases the disturbing trend of democratic backsliding in Latin America, where authoritarian and autocratic leaders are ascendant, political parties weakening and falling into discredit and candidates running on anti-system agendas are winning power. As the Latin American bishops’ council, or CELAM, meets in Mexico Nov. 21-28, an important part of its agenda is how to confront a decline in democracy, a process pushed by parties and leaders on the left and right.

Brazilian President Jair Bolsonaro, who speaks favorably of military rule, already has sowed doubts about the result of the general election scheduled for October 2022. Venezuela’s government has held sham elections and persecuted opponents. Leaders in Bolivia and Honduras have won cases in their countries’ supreme courts to win the right to seek re-election, despite constitutional prohibitions — moves that led to disputed elections and violence.

“There’s an authoritarian trend from both sides of the spectrum,” said Jesuit Father Mauricio García Duran, executive director of Jesuit Refugee Service Colombia. “There are complex challenges in the sense that rulers don’t really believe in real democratic participation.”

In an interview, Peruvian Archbishop Hector Miguel Cabrejos Vidarte, president of CELAM, told Catholic News Service: “When we talk about strengthening (democracy) it means that there is a weakness, and certainly that’s the case in many countries. … Although (democracy) is the best system, which the church believes, it is weak and, in many countries, much weaker still.” 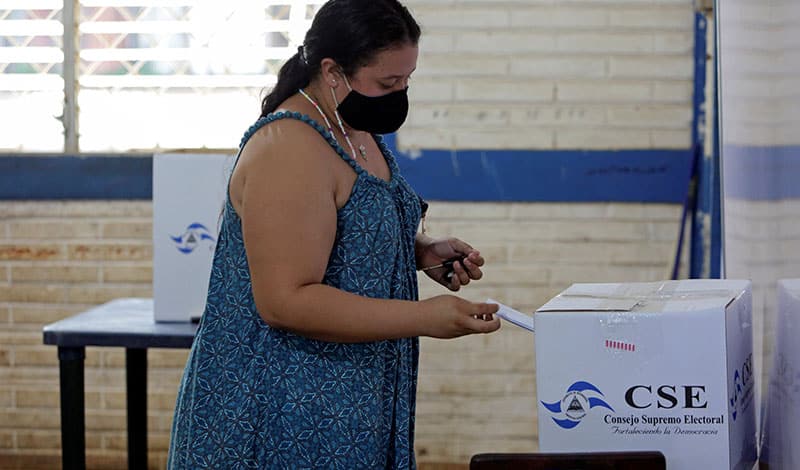 A woman casts her ballot at a school used as polling station during the country’s presidential election in Managua, Nicaragua, Nov. 7, 2021. Seven presidential candidates were disqualified and opposition figures were arrested before President Daniel Ortega won elections. (CNS photo/Reuters)

A recent Latinobarómetro poll, measuring attitudes in Latin America, put support for democracy at 48% in 2018 — down from 63% in 2010.

The situation presents conundrums for the Catholic Church in Latin America. In some countries – such as in Chile and Mexico – bishops have courted close ties with the elites, who subsequently were swept out of office or fell into disrepute. In other countries, evangelical politicians are claiming elected offices, especially in legislatures, and threatening the influence of Catholic leaders in the political sphere.

Pope Francis has urged Catholics to pursue a pastoral approach of leaving parishes for the periphery, pursuing the protection of human rights and raising their voices to confront social injustices. It’s not always a comfortable place for church leaders, who see raising such issues as causing conflict with political elites. Observers say it is increasingly competitive terrain as evangelical congregations gain ground with the poor.

“In spite of the advances in political and social participation, in our region ‘harmonious and peaceful coexistence is deteriorating very seriously in many countries,'” the CELAM assembly preparatory document reads, citing the document published from its Aparecida assembly of 2007. Pope Francis, then archbishop of Buenos Aires, headed the drafting committee for that document.

“Participation in revitalizing the social texture is proper to Christians inasmuch as we are co-responsible for the common good,” said the preparatory document. “Therefore, it is an urgent task for us to take part in and work for the maturing of the political and social systems of our peoples … so that political systems are truly at the service of people and their integral development.” 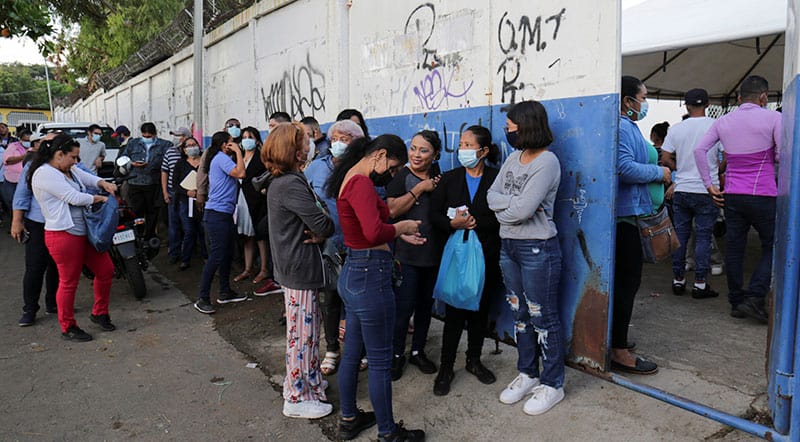 People wait in line outside a school used as polling station to cast their vote during the country’s presidential election in Managua, Nicaragua, Nov. 7, 2021. Seven presidential candidates were disqualified and opposition figures were arrested before President Daniel Ortega won elections. (CNS photo/Reuters)
Catholics’ role in promoting democracy often has been spotty, according to prelates. The sad reality is reflected both in the abundance of politicians professing Catholicism but accused of engaging in graft or trampling human rights and in the passivity of citizens going along with vices such as vote-buying or tolerating poor governance.

“There is a great lack of political formation,” said Cardinal Álvaro Ramazzini of Huehuetenango, Guatemala. “We ourselves, coming from the social doctrine of the church, more or less try to do something.

“But (it) is difficult for (people) to understand that politics is a way of living the Christian faith and, in that sense, our democracies are very weak.”

Observers attribute much of the disenchantment to a lack of results.

“For years, the region has seen public support for democracy decline, fueled by widespread frustration over slow growth, stubborn inequality and corruption,” said Benjamin Gedan, deputy director of the Latin American Program at the Washington-based Woodrow Wilson International Center for Scholars. “Latin America’s democratic backsliding should not be exaggerated,” he added, pointing to trends such increased militarization of public security, the use of the pandemic as a pretext for curtailing protests and the impeding of independent journalism.

Intervening in politics — or being seen as siding with elites — can prove problematic for the church. In Honduras, the bishops split on condemning the 2009 coup. The resulting years led to a loss of credibility, though recent statements have been “very strong against a political class, which has not been attentive to national problems,” said Father Germán Calix, former director of Cáritas Honduras.

The political picture appears bleak in the region. Salvadoran President Nayib Bukele has consolidated power in the presidency, while subordinating the courts and congress and persecuting critical journalists and actors in civil society. 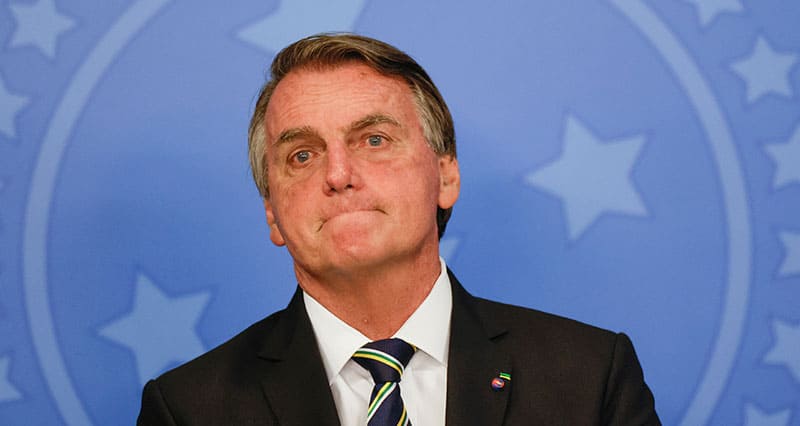 Brazilian President Jair Bolsonaro reacts during a ceremony at the presidential palace in Brasilia Oct. 20, 2021. He already has sowed doubts about the result of the general election scheduled for October 2022. (CNS photo/Ueslei Marcelino, Reuters)

In recent years, Guatemala scrapped an international mechanism for combating impunity — after elites in the country came under unprecedented judicial scrutiny. The country has come under criticism for undermining the rule of law, but also for its poor handling of the pandemic and failure to get vaccination campaigns going.

“I can mention myself as one of those disenchanted with this government,” Cardinal Ramazzini said.

The church in some countries is raising its voice louder. This year, Guatemala’s bishops rebuked the removal of the country’s top anti-impunity prosecutor and demanded deported migrants from the U.S. not be dumped in remote jungle downs on the Mexico-Guatemala border. Mexico’s bishops also have spoken out on the migration issue.

But intervention brings risks. In Bolivia, the bishops were invited by the ruling party to mediate an end to the 2019 post-election conflict, in which President Evo Morales claimed victory in a vote rife with irregularities. The agreement helped end violent protests and allowed for the installation of an interim president — a figure who proved polarizing and polemical. After Morales’ party returned to power democratically with a different leader in 2020, the new government accused the church of participating in a coup.

Bolivian journalist Rafael Archondo attributed the country’s electoral strife to Morales seeking a fourth term in office after losing a referendum on the issue. “It’s a tradition in Latin America to have a leader who sees himself as irreplaceable.”

Nicaragua also has a leader who sees himself as irreplaceable. After protests erupted in early 2018 and people demanded Ortega’s ouster, Nicaragua’s bishops facilitated talks. The process fell apart as Ortega showed no interest in acceding to demands for new elections.

The situation turned so tense that Auxiliary Bishop Silvio José Baez, an outspoken Ortega critic, was forced to flee the country. An explosive device was later thrown in the Managua cathedral’s Blood of Christ chapel. Even a diocesan-run COVID-19 program was ordered closed by the health ministry.

“I want to be a priest. I want to give catechism classes. I want to celebrate Mass. But when it affects my flock … we have to speak and say something,” Msgr. Áviles told CNS.

“It’s not that we’re meddling in politics. I’m defending basic human rights,” he said. “We’re not going to stay silent.”

Featured image: Peruvian Archbishop Héctor Miguel Cabrejos Vidarte of Trujillo, president of Latin American bishops’ council, is pictured with Pope Francis in Trujillo Jan. 20, 2018. When the council, known by its Spanish acronym as CELAM, meets in Mexico Nov. 21-28, an important part of its agenda is how to confront a decline in democracy. (CNS photo/Paul Haring)