Fears of all-out war in Ethiopia grow, amid reports that the Tigray Defense Force are on the outskirts of the capital, Addis Ababa.

NAIROBI, Kenya (CNS) — One year into the conflict in Ethiopia’s Tigray region, Father Joseph Mussie Zerai is urging the international community to accelerate efforts to stop any risk of ethnic cleansing, avoid balkanization of Ethiopia and stop a food catastrophe underway.

“The international community should be ashamed of the protracted war,” Father Zerai told Catholic News Service. “Everything that we find written in the international treaties and conventions on the prevention and protection of civilians in the event of a conflict” has been disregarded.

He spoke as fears of all-out war in the country grew, amid reports that the Tigray Defense Force was on the outskirts of the Ethiopian capital, Addis Ababa. 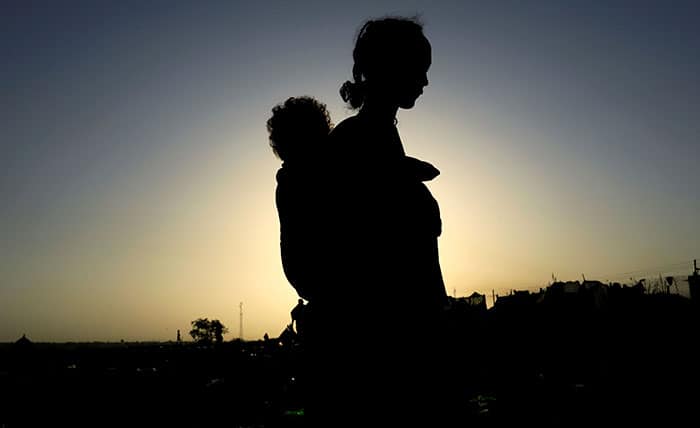 An Ethiopian woman who fled the ongoing fighting in Tigray region, carries her child near the Setit river on the Sudan-Ethiopia border Nov. 22, 2020. One year after the start of the conflict in Tigray, the rebels are driving toward the Ethiopian capital, Addis Ababa. (CNS photo/Mohamed Nureldin Abdallah, Reuters)

The conflict, which began in Tigray Nov. 4, 2020, has killed thousands and displaced more than 1 million people, as it destroyed villages and towns. It has turned women and children into targets of violence by armed men as it spread to other regions.

An Ethiopian priest who is an expert in peace and security and who had been following the Tigray crisis echoed Father Zerai’s sentiments.

“My word to the international community — shame on you … when people are being exterminated, you did not have a word to say. This is a second Rwanda. They have failed us,” said the cleric, who cannot be named for safety reasons.

He added that many people in Tigray are dying directly, either of hunger or malnutrition-related diseases because, for one year, no real relief aid has made it into the region.

“The war was proclaimed at a very bad time when the people were supposed to be gathering their harvests. At that time, they could not gather their harvest because of the war. They didn’t have any food at home. So the people are starving to death,” he said. 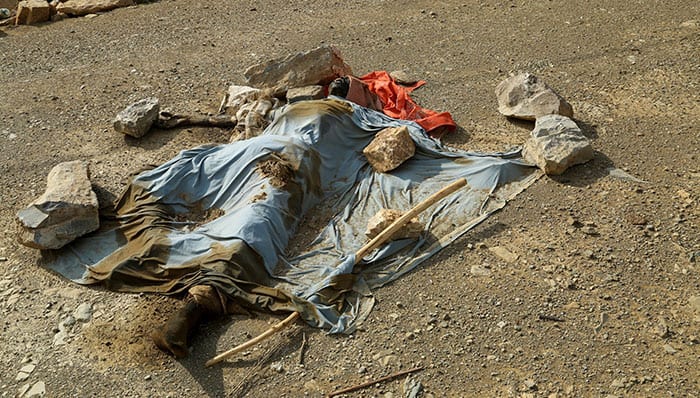 The body of a soldier from the Ethiopian military lies covered on the main road of the village of Sheweate Hugum in Ethiopia’s Tigray region July 10, 2021. The U.N. High Commission for Human Rights and Ethiopian Human Rights Commission said both sides in the wat had committed abuses that amounted to war crimes (CNS photo/Giulia Paravicini, Reuters)

The conflict began when Ethiopian Prime Minister Abiy Ahmed Ali, a Nobel Peace Prize laurate, launched an attack on the administration of the semi-autonomous region. He accused the regional administration of attacking a national army base in the Tigray capital, Mekele.

On Nov. 3, the prime minister declared a state of emergency and urged residents to arm themselves to protect their neighborhoods as the rebels advanced on the capital. He said the rebel advance was pushing the country to demise, in a statement that was later pulled down by Facebook over allegations he was inciting violence.

At the same time, a joint report of the U.N. and Ethiopian human rights commissions said both sides had committed abuses that amounted to war crimes.

Catholic Near East Welfare Association, which supports humanitarian and pastoral programs of the Ethiopian Catholic Church, is “monitoring the situation in Ethiopia each day,” particularly in the areas of northern Ethiopia, said Msgr. Peter I. Vaccari, president of CNEWA.

“We share in the concern for all the people of Ethiopia, especially in light of the escalation of violence,” he added. “I am in regular contact with our team members — CNEWA has a program office in Addis Abba — who are clearly concerned about the deteriorating situation on the ground, particularly after the federal government declared a state of emergency for the capital.

“Our regional director, Argaw Fantu, has asked for prayers from ‘all people of good will’ to end the terror and the bloodshed,” he said.