VATICAN CITY (CNS) — The Christian mission of proclaiming the Gospel of salvation and defending the God-given dignity of every human person has led popes over the past 130 years to build a body of theological reflection known as Catholic social teaching or social doctrine.

That teaching has expanded and deepened over the years, challenging an idea that somehow church teaching never changes.

While human sin is constant, it can and does take new forms in the world.

And while Gospel values are constant, there can be and have been changes in the church’s understanding of how to live those values more fully to ensure a life that is good, just and peaceful for all God’s children in a changing world.

From the pontificate of Pope Leo XIII to that of Pope Benedict XVI, some Catholics reacted with skepticism each time an official pronouncement was made on social issues, from workers’ rights to nuclear weapons and from the problems with unbridled capitalism to the need for a strong “world political authority” to coordinate responses to global challenges.

The degree of skepticism has grown exponentially with Pope Francis’ social teaching on the economy, the environment, the death penalty, migration and, most recently, the call to universal “fraternity and social friendship.”

Canadian Cardinal Michael Czerny and Father Christian Barone, an Italian theologian, joined forces to explain the theological and pastoral foundations of Pope Francis’ social teaching, its connection to the teaching of the Second Vatican Council and its points of continuity with and development of the magisterium of his predecessors.

Their book, “Fraternity: Sign of the Times,” was released in Italian Sept. 30 by the Vatican publishing house. The English translation, “Siblings All, Sign of the Times: The Social Teaching of Pope Francis,” will be published by Orbis Books in 2022. 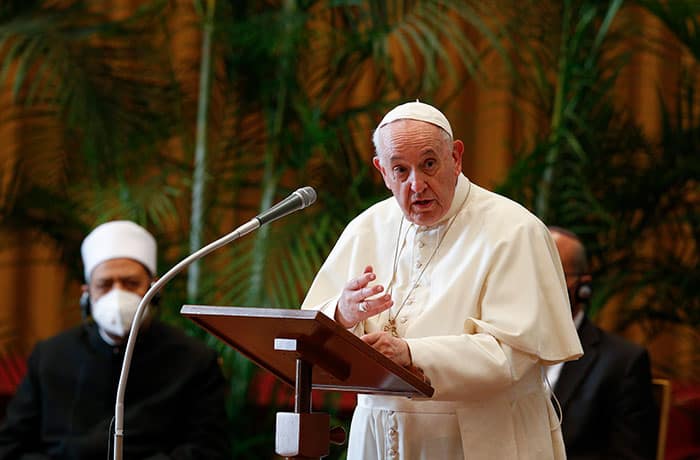 Pope Francis addresses the meeting, Faith and Science: Towards COP26, with religious leaders in the Hall of Benedictions at the Vatican Oct. 4, 2021. The meeting was part of the run-up to the U.N. Climate Change Conference, called COP26, in Glasgow, Scotland, Oct. 31 to Nov. 12, 2021. (CNS photo/Paul Haring)

Pope Francis wrote a preface for the book, explaining: “The heart of the Gospel is the proclamation of the kingdom of God, which is the person of Jesus — Emmanuel and God with us. In him, in fact, God definitively manifests his plan of love for humanity, establishing his lordship over creatures and inserting into human history the seed of divine life, which transforms it from within.”

For Pope Francis, the authors wrote, everything flows from a personal relationship with Jesus in the church, which leads individuals and the whole community to a desire to live differently and share God’s love with others, listening to them, ministering to their needs and sharing the Gospel with them.

Following the teaching of the Second Vatican Council and the popes who preceded him, the authors said, Pope Francis insists on “the close link between proclamation and social commitment, between faith and justice, joy and solidarity,” which shows “how the essence of Christianity is summed up in charity.”

“We can proclaim to the world the greatest truths about God, but without that love which becomes a closeness and a gift of self to the ‘wounded’ other, in the manner of the good Samaritan, faith stops at a merely theoretical level,” they wrote.

While St. John Paul II is rightly credited with firmly establishing Catholic social teaching as an important discipline in Catholic theology, Father Barone told Catholic News Service, “some of his arguments often remain tied to subjective choices, falling into the realm of personal ethics. Francis has had the strength to say that it is not enough to be ‘better’ people as individuals, but it is necessary to make ethical choices that involve the least ones and thus change the common direction of humanity.” Pope Francis kisses the altar as he celebrates Mass for the Vatican police force, known as the gendarme, in the Lourdes grotto of the Vatican Gardens Oct. 2, 2021. Hostility, conflict, war are all fruit of the devil, the pope told Vatican police in his homily. (CNS photo/Vatican Media)

In short, Father Barone said, “One cannot act in the direction of a more just world if one does not start by listening to those who live in injustice.”

Cardinal Czerny and Father Barone wrote that there are ways in which the Second Vatican Council and Pope Francis’ teaching in line with it marked a shift in Catholic theology, particularly in attitudes toward the world and the search for signs of God’s action in it.

“From its very first decisions,” they said, “Vatican II reversed the course with respect to the orientation that for more than four centuries had conditioned the church’s posture toward modernity, overcoming a reactionary mentality that had confined Catholics to a resigned, ‘victimistic’ immobility,” focused on lamenting the end of Christendom and the church’s loss of power and influence.

“Abandoning that judgmental attitude that in the past had led the church to stigmatize, almost a priori, every innovation as an ‘error’ from which to protect itself, in ‘Gaudium et Spes’ Vatican II maintained that between faith and modernity there is no opposition in principle,” they said. Instead, the council taught that every change requires attentive scrutiny — reading the “signs of the times” — and that dialogue rather than confrontation could benefit both society and the church, which is called by God to live in history and cooperate in building God’s kingdom.

“Early in one’s Christian life — and later on, too — up comes the question, ‘How do I live this beautiful and demanding faith in Jesus during the week, Monday to Friday?'” Cardinal Czerny told CNS. “The question gets answered with the help of Catholic social teaching, which sheds the light of the Gospel, the message of Jesus, onto the questions which trouble us and which we really do need to take responsibility for both as citizens and as Christians: economic inequality, environmental degradation, racism and xenophobia, abuse and violence against women and children and so on.”

“Catholic social teaching,” he said, “is about living the Christian faith in the marketplace, in the agora or the commons of life.”

Featured image: Pope Francis leads the recitation of the Angelus from the library of the Apostolic Palace at the Vatican Jan. 1, 2021. A new book, “Fraternity: Sign of the Times,” which was released in Italian Sept. 30 by the Vatican publishing house, explains the theological and pastoral foundations of Pope Francis’ social teaching. (CNS photo/Vatican Media)