W hen she was discerning joining the Maryknoll Lay Missioners, one of the things Margarita Durán was concerned about was separation from family and friends. Serving in São Paulo, Brazil, however, she has found that building new relationships and friendships is the most rewarding part of being a lay missioner.

“Coming from a big, tight-knit Latino family, I’m very family-oriented,” Durán, 26, says. “But in my ministries here, I build relationships with many wonderful people that help fill that void. They have now become my friends and my ‘overseas family.’”

Durán’s interest in mission was sparked when she was a teen helping with catechism classes in her home parish in New Mexico. Her family received Maryknoll magazine, so when she became serious about pursuing overseas mission, Maryknoll seemed a natural place to look. Earlier this year, Durán completed her initial three-and-a-half-year commitment with Maryknoll Lay Missioners. She renewed for an extended term and will continue teaching religious education, art, physical education and English to at-risk children and youth in São Paulo’s favelas.

Durán began working in the favela of Haiti (a community of Haitian immigrants and internal migrants who moved from northeast Brazil in search of better lives) in 2018. Maryknoll Sister Anastasia Lee had helped launch a women’s group to provide emotional and social support for women. Durán joined in accompanying the group, offering workshops on conflict and trauma therapy. When the women expressed interest in exercise classes, Durán stepped up (literally!) and started a Zumba class. She would lead the crew of women and kids in fast-paced salsa, merengue, cumbia and other Zumba moves. Smiles beamed all around.

One girl from the Haiti community has particularly inspired Durán. “She suffers from scoliosis, but that doesn’t stop her from running to my Zumba classes every Tuesday and Thursday,” Durán says of 11-year-old Maria Clara. “In fact, she has helped me choreograph four songs. Maria Clara is a high-spirited young girl with big dreams for her life— including becoming a dancer and a veterinarian.” 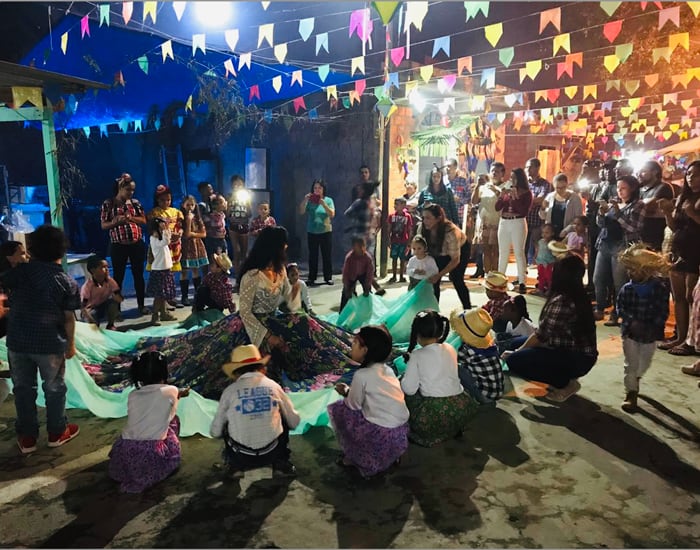 Durán also teamed up with Spiritan seminarians to teach a Saturday catechism class for 7- to 12-year-old children. The class created the design for an expansive mosaic, compiled from the children’s ideas, for the new Nossa Senhora das Graças (Our Lady of Grace) Chapel in the favela. “The work on the mosaic was a wonderful opportunity to build teamwork skills and self-esteem among the children,” Durán says.

Another creative project led by Durán and enthusiastically embraced by the community was a traditional dança da saia (skirt dance) performed during the favela’s “Festa Junina” celebration of St. John the Baptist. “The dança da saia is usually performed with preschool-aged children,” Durán explains. “I wore an enormously large skirt at the center of the circle while the young children danced around me holding on to the ends.” (For more, see https://mklm.org/skirt-dance)

“Margarita is always ready to lend a hand and help bring an idea to life,” says Eliana, a community leader in Haiti who helped organize the Festa Junina event. “She has amazing energy and pours her heart into every detail.”

In early 2020, Margarita Durán felt she had hit her stride. Her ministry projects in São Paulo were running smoothly and she had become more and more connected in the communities where she was working. Then came the coronavirus pandemic, and, like much of the world, she says, “I had to start back from zero all over again. It’s definitely been a roller coaster ride.” 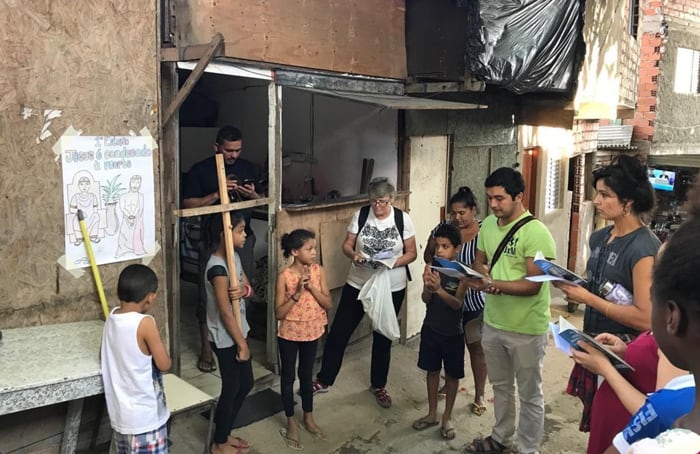 After the United States, Brazil has seen the world’s second highest COVID-19 death toll. And its largest urban center, São Paulo, has been a hotspot. As of mid-July, the state of São Paulo alone had seen more than 130,000 of Brazil’s over 530,000 COVID deaths.

According to UNICEF, prior to the pandemic, 60% of children in Brazil already lived in poverty. Health emergencies, economic hardships, food insecurity and mental health stresses have added heavy new burdens to the lives of Brazilians, especially young people.

“The pandemic has affected both people’s livelihoods and their quality of life,” Durán says. “People who used to be so high-spirited and active are now discouraged and battling through feelings of hopelessness. That has been one of the hardest things to see among so many people I have come to care for.”

Seeing their suffering, Durán says, has strengthened her commitment to accompaniment—walking with people, making time to be present and to lift their spirits. The missioner has found that starting the day with Scripture, other spiritual readings, prayer or meditation helps to ground her and remind her why she is there.

Not long after the first pandemic lockdown, the Centro de Integração do Migrante (Migrant Integration Center, CIM) in the neighborhood of Brás began responding to hunger in the community. Along with CIM’s director Sister Malgarete Conte, a Missionary Servant of the Holy Spirit, staff and other volunteers, Durán helps distribute baskets of basic food items. These are provided through a large food relief program collaboratively organized by a network of nonprofits in Brazil. 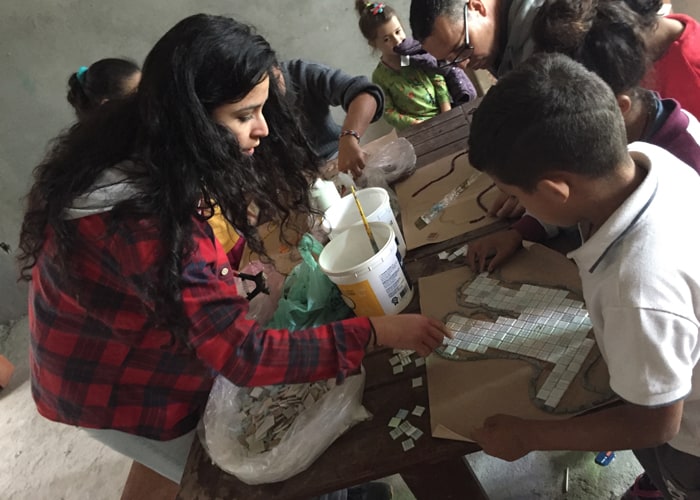 Margarita Durán helps children to create doves representing the Holy Spirit for a mosaic at Our Lady of Grace Chapel in Community Haiti. (Kathleen Maynard/Brazil)

“The baskets include basic necessities and food staples such as beans, rice, flour, coffee, canned goods and sometimes fruits and vegetables,” Durán explains. “But on the downside, the donations can’t always meet the need. Some weekends, we have had 50 families come to the center pleading for a basket, but there are only 25 available. In all the communities where I work, many families really depend on these donations.” She adds, “I register the families, see what their means are, and then prioritize.”

Durán continues, “The city center of São Paulo is now filled with people living in situations of homelessness.” She has joined fellow Maryknoll Lay Missioner Joanne Blaney volunteering at the Street Network, which provides lunch each day to an average of 1,000 people.

Blaney, who has served for more than two decades with Maryknoll Lay Missioners in Brazil and is its regional director, is glad Durán followed her vocational call to the favelas of Brazil. She most values Margarita’s “loving presence and service to others, her creativity and generosity in using her skills and talents for mission. Margarita continues to be a gift to us in the Maryknoll Brazil Mission Community.”

Featured image: Margarita Durán works on a mosaic for Our Lady of Grace Chapel in a São Paulo favela. (Oscar Britez/Brazil)