Father Joseph Thaler reflects on his lifelong mission to serve as a Maryknoll priest alongside the most vulnerable people of Nepal.

I t all began with a priest on a motorcycle. At school, 11-year-old Joe Thaler was captivated by a presentation about Maryknoll. “A priest riding a motorcycle in Africa seemed pretty appealing,” Maryknoll Father Joseph Thaler recalls. It was the launching point for a lifetime of service. In Nepal, he logs thousands of miles navigating treacherous terrain on a tenderly cared-for 30-year-old Honda XL 185 motorcycle.

“I felt a call to the priesthood even when I was younger, and I got a lot of positive reinforcement,” Father Thaler reflects. Young Joe’s family and parish priests were supportive. Another influence was family friend Father Robert Greene, a Maryknoll missioner who had been imprisoned in China. After graduating from Covington Catholic High School in Park Hills, Kentucky, Thaler began his vocational training at Maryknoll College Seminary in 1967.

In the mid-1970s, the work of Maryknoll missions was taking new shape. “Missiology within the Church was changing,” Father Thaler says. “For the first time, the Church was willing to accept the fact that truth could be found in other religions.” He continues, “Maybe God was already present in other peoples and other cultures before the missionary person arrived.”

In Nepal—then known as a Hindu kingdom—missioners would not be allowed to baptize or preach. Even today it is forbidden by law to proselytize, although personal conversions and practice of all religions is permitted. “But still, Maryknoll felt that this was where God was calling us to be,” recounts Father Thaler. He notes that in 1974, Pope Paul VI had convened a synod to define evangelization: “It emphasized that the world needs to see witnesses of a new possible way of living in order to be introduced to the Good News.” After much personal discernment and the decision by the Maryknoll Society to open a mission in Nepal, on Oct. 17, 1977, Father Thaler boarded a plane for Kathmandu. 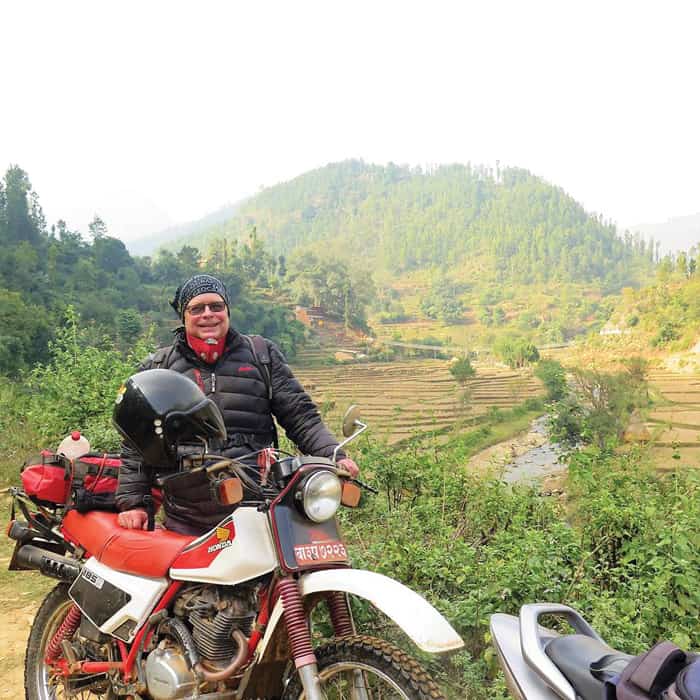 Maryknoll Father Joseph Thaler has logged thousands of miles over rough terrain on his 30-year-old Honda XL 185 motorcycle to visit the Nepalese. (Courtesy of Joseph Thaler/Nepal)

He describes being overcome by the majestic mountain scenery from the plane as he arrived in Nepal. “Boom, there’s Everest out the window and the beautiful Himalayan mountains,” Father Thaler recalls. “And it was crystal clear. When I arrived here, I could just feel that this is where I wanted to be—it was a really good feeling. When I look back at how I ended up in Nepal, it’s because not only was I called to the priesthood, but I felt that this was the call that I had—to mission.”

Father Thaler, known simply as “Father Joe,” and his indomitable staff soon became involved in dozens of community-based projects. This would be how the Good News was made visible in mission.

One of the early missioners in Nepal had worked with differently abled people in Japan and sensitized other members of the team to their plight. The missioners became aware that in Nepal, people with disabilities were shunned. Culturally, disability was seen as a curse, a karmic stain on the family, disrupting the design of the universe. Often, the disabled were hidden by their families or forced to survive by begging. 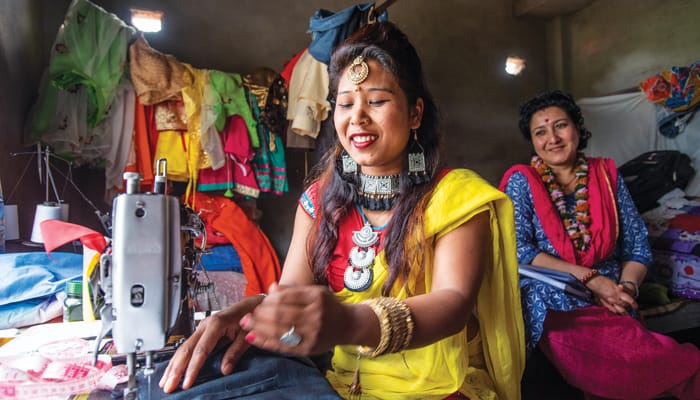 Samjhana Tharu, a graduate of the Sewing Cutting Training Program for Deprived Women in the Bardiya District of Nepal, sews as Shailee Singh Rahour, project director for the Maryknoll Fathers and Brothers in Nepal, proudly looks on. (Gregg Brekke/Nepal)

“We were walking down the street and there was a woman selling cigarettes,” Father Thaler says. “She had a sack next to her, and every once in a while, that sack would shake. So we asked her, ‘What’s in the sack?’ She told us it was her daughter. And the reason she had her daughter in the sack was because she was disabled.”

Moved by this and other examples, the missioners created a day center for people with physical and mental disabilities. The project provided a space to meet others like them, to grow in self-esteem, and to gain skills.

“It was a springboard for further ideas,” says Father Thaler, reflecting on those early years. The mission expanded to embrace others at risk in Nepali society: widows, people of lower castes, students with few opportunities and day laborers in brick factories. “The Good News in Nepali context,” says Father Thaler, “is seen in their work of educating for self-sufficiency, releasing women from prisons, rebuilding homes and communities after the 2015 earthquake, meeting medical and mental health needs, saving young people from human trafficking, and providing COVID relief.” During the pandemic, the Maryknoll mission has provided oxygen cylinders, distributed personal protective equipment, and worked with local agencies to mitigate contagion. 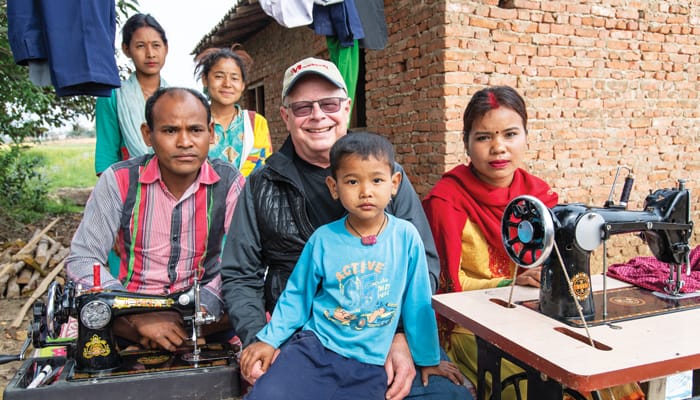 Father Thaler is flanked by Sitaram and Reena Tharu, graduates of the Sewing Cutting Training for Differently Abled Persons, as he visits their home. Trainees of the couple stand behind while a young neighbor sits with the Maryknoll priest. (Gregg Brekke/Nepal)

All of this is accomplished through the dedicated staff of Maryknoll Nepal and partnerships with other non-governmental organizations, cultivated since the mission’s inception. Asked to number how many people have been assisted by the Maryknoll mission in Nepal, Father Thaler rattles off figures from nearly a dozen long-term projects. The list goes on and on, with the count reaching into the thousands.

Father Thaler has navigated regime changes, natural disasters and shifts in Nepali culture. Most importantly, he has developed deep relationships. He shares his vast experience of financial and organizational stewardship, but also enters joyfully into the life of the people. As the Maryknoll representative of the Maryknoll Fathers and Brothers, Nepal, Father Thaler enjoys project visits to various remote and isolated communities. Because of terrain and climate conditions, sometimes traveling just five miles can take up to an hour by motorcycle. Father Thaler doesn’t mind. 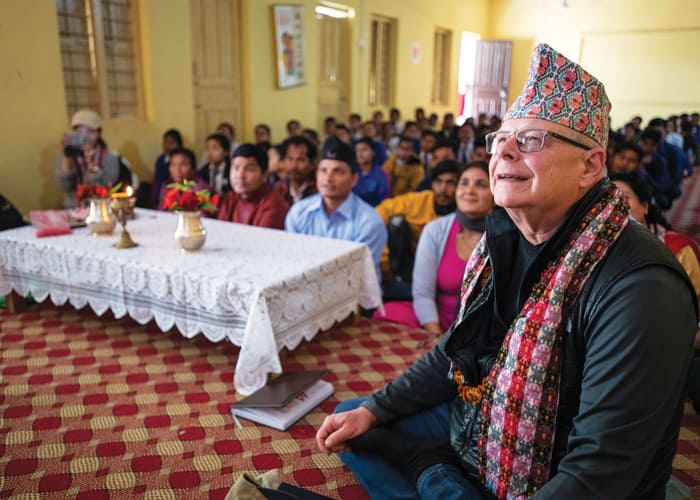 Father Thaler with students and staff at a presentation for the Maryknoll Fathers and Brothers of Nepal at the secondary school in Tratal, Bardiya District. (Gregg Brekke/Nepal)

“Sharing meals and participating in weddings and festivals and all types of cultural activities is common on each project visit,” he says. “Invitations are extended to visit the temple, the Gompa (monastery) or the mosque and even the cave to share a blessing. I learn and listen to the many needs that go way beyond the work of the ‘official’ project, and together we respond to them.”

Although the breadth of Maryknoll’s mission outreach is wide, Father Thaler’s focused commitment, present in every activity, is to outcasts and the poor. He is grateful that in Maryknoll, the priestly vocation isn’t limited to parish-based sacramental ministry, as important as it is. In 2021, the missioner celebrates 45 years of ordained ministry as a Maryknoll priest. “Our call is to mission. Our call is to other people, and to live out the Gospel,” he says. “In my life, I feel very happy in the priesthood, because it has called me to serve and to be present within the world in different types of situations.”