Religious leaders in Uganda are working to protect women and girls from gender-based violence in this African nation.

TORORO, Uganda (CNS) — Lying in her hospital bed, Grace Namakula, 39, writhed in pain as she explained how her husband beat and seriously injured her following a domestic dispute.

“He rained blows, kicks and slaps on me because I complained he had married the second wife without informing me,” sobbed the mother of five, whose face was badly swollen. “I pleaded with him to forgive me, but he refused. He undressed me and continued beating me.” Her neighbors rescued her and took her to the hospital.

Namakula said that, over two decades, her husband had assaulted her over trivial issues, but she had been holding on to the marriage because she had nowhere else to go. Her parents are dead, and she is jobless.

“But when he married the second wife, he became more violent,” said Namakula, who now wonders where she will go if she decides to divorce him.

Namakula is among women and girls who are increasingly experiencing violence in the East African nation despite the presence of laws and rules to defend victims and survivors of gender-based violence.

These statistics have prompted the Catholic Church to respond. Religious leaders across the country of 44 million people have vowed to fight against gender-based violence. They are engaged in activities to increase awareness to overcome violence and protect vulnerable women and girls.

In Tororo, for example, Father John Okoroi has been visiting villages to talk to the people in their houses about the dangers of gender-based violence.

“We are determined to ensure that violence against women and girls is stopped by all means,” said Father Okoroi, pastor of Molo Catholic parish in the Archdiocese of Tororo. “We are taking our messages of guidance, wisdom and advice to the villages and houses to help couples, families and ensure the message reaches out to everyone in our communities.”

Father Okoroi is also working with other organizations and community elders to organize public dialogues in every village to ensure outreach to the wider community. During these meetings, residents are invited to discuss issues around violence as well as offer suggestions. 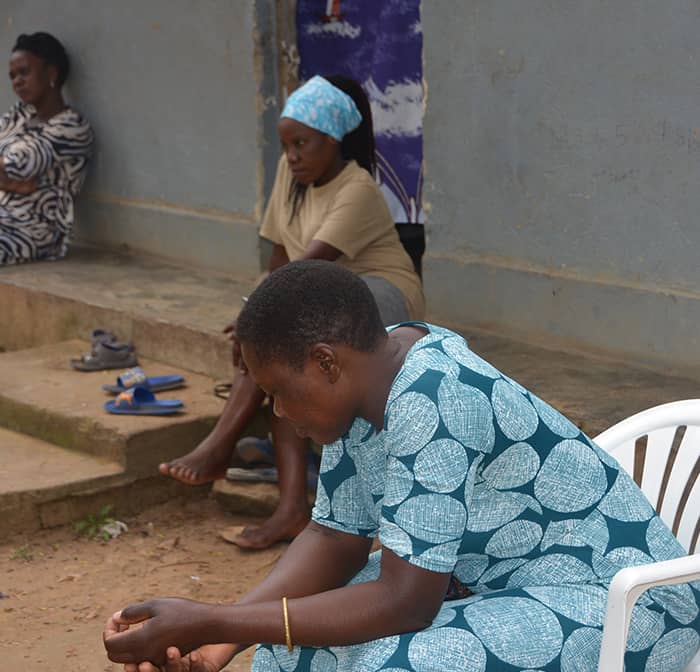 Women sit outside their houses in Mbale, Uganda, Nov. 17, 2018. Women in Uganda are increasingly experiencing gender-based violence, despite the presence of laws and policies to protect victims and survivors. (CNS photo/ Tonny Onyulo)

One of the organizations that Father Okoroi works with is the Uganda Women’s Network, an advocacy and lobbying network of national women’s groups and individuals. The group seeks to protect women’s dignity and welfare and provides medical treatment, legal and psychosocial support services to the victims of gender-based violence.

Evelyn Nasenya, coordinator of the network, said gender-based violence among married women is on the rise, and she said it must be fought at home, within families, in villages, workplaces and in public settings.

“We need to stop gender-based violence and protect victims from more harm,” she said, noting that abusers of women always view violence as the only way to solve a family quarrel. “We urge women and girls to resist from being abused and report such cases to us and the police. We are committed to reaching every village to ensure women are safe and know their rights.”

In central Uganda, Father William Mirimu has been working with the National Association of Women’s Organizations in Uganda to raise awareness and deter violence against women.

Father Mirimu has been providing training to women and girls in various villages about their rights and ensuring girls stay in school to avoid early marriages and female circumcision. Empowering women by training them on job skills and giving them funds to start businesses reduces gender-based violence, he said, adding that women living in poverty are particularly vulnerable to the vice, because they cannot access legal services and take care of themselves if divorced.

“I am happy because cases of gender-based violence have reduced as a result of the dialogue sessions I have held with women about their economic rights,” said Father Mirimu, a priest at Mpigi parish in central Uganda. He said the COVID-19 pandemic had slowed trainings.

Catechist Gilbert Emorut of the Kasana–Luweero Diocese said religious leaders, with the support of other organizations, are offering a training program that provides vocational training for female victims of gender-based violence, helping them to plan, start and manage their own businesses.

“The program has really helped women, and many have started small businesses to help themselves and their families, and this has reduced the violence,” said Emorut. “If we empower women and take our children to school, then we will end gender-based violence forever.”

Father Mirimu agreed: “We want the voice of women to be heard through participation in economic development processes. We want them to be empowered and take leadership positions in churches, schools, government offices and institutions.”

Jesca Waswaka is one of the women in central Uganda who has benefitted from the training program. She endured years of beatings at the hands of her former husband before deciding to divorce. Waswaka attended the program and was trained on how to start and manage poultry farming, she said, adding that she later bought a few chicks and started rearing them, and her business has grown.

“I now enjoy financial independence as a woman, and this makes me feel good and confident,” said the mother of four, who is focused on expanding her business. “I want this program to reach out to other women who are facing gender-based violence, so that they can rescue themselves and be free to start their own businesses.”

Featured image: A young woman in distress is pictured after dropping out of school in Mbale, Uganda, Nov. 17, 2018. Girls and women in Uganda and other African countries are facing gender-based violence caused by poverty, cultural norms and practices, poor infrastructure, violence and fragility. (CNS photo/Tonny Onyulo)