WASHINGTON (CNS) — The priest who is Pax Christi USA’s “Teacher of Peace” award recipient for 2021 said white nationalism is “the greatest threat to peace in our time, both nationally and even internationally.”

“White nationalism is the existential, visceral conviction that this country — its public spaces, its history, its culture — belong to white people in a way that they do not and should not belong to ‘others,'” Father Bryan Massingale said in remarks accepting the award July 31 during Pax Christi’s national conference, held via Zoom.

A Milwaukee archdiocesan priest, he is a theology professor at Fordham University in New York and holds the theology department’s James and Nancy Buckman Chair in Applied Christian Ethics.

“The brutal mob violence of Jan. 6 was a clear declaration that many white Americans would rather live in a white dictatorship than in a multiracial democracy. If democracy means sharing power with people of color, and especially Black people, they want no part of it,” said Father Massingale, who is the author of “Racial Justice and the Catholic Church,” published by Maryknoll’s Orbis Books.

White nationalism’s “commitment to racist political and cultural supremacy is obvious, manifested in voter suppression laws, crusades against ‘critical race theory’ — which most of its opponents have never read — and public vitriol,” he added.

“And white nationalism is a threat to global health and stability, through its irresponsible and reckless denigration of mask wearing and vaccination in the face of the greatest health crisis to afflict humankind in over a century,” he said. 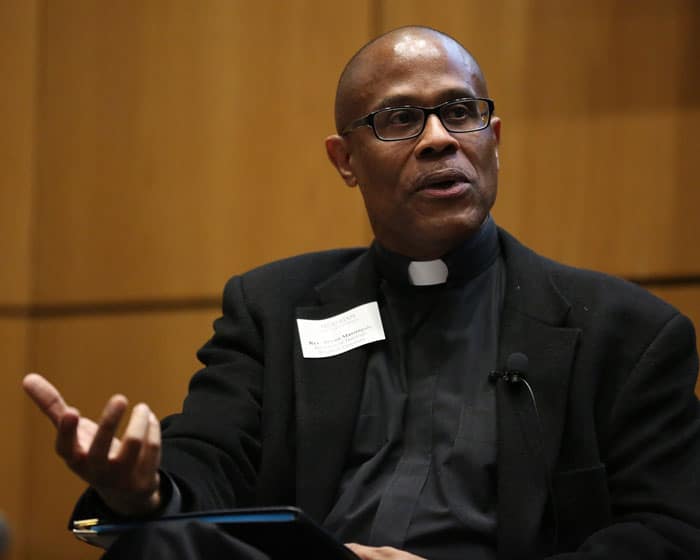 Father Massingale recalled challenging Pax Christi in 2013 that “if it was to be relevant and on the frontier as a Catholic peacemaking movement with justice, then it had to become more ‘intersectional’ in both theory and practice. Peace, I declared, can no longer be a stand-alone issue.”

“The crises that face us — militarism, racism, ecology and poverty — are interlocking, overlapping and compounded,” he continued. “Single issue groups and struggles will be neither effective nor compel people’s attention. To paraphrase the great Audre Lorde (a 20th-century Black writer and civil rights activist), many people do not have the luxury of engaging single-issue struggles because they — we — do not live single-issue lives.

Today, Father Massingale said, “if Pax Christi is to be relevant as a Catholic movement of peacemaking with justice, it must name white nationalism as the greatest threat to peace. It must realize that this threat will persist for at least the next three years, certainly through the 2024 election cycle, and probably beyond.”

He added, “Genuine peace — the goal, dream and passion of Pax Christi — is impossible without a cultural evolution so profound and far-reaching it is almost impossible to imagine — and perhaps even terrifying to envision.

Not all is lost, Father Massingale said. “If Jesus were alive today, and witnessed the vitriol on certain Catholic websites, he would add to his list of beatitudes, ‘Blessed are you when they blog about you and post vile slander against you because of me.'”

But “my enslaved ancestors sang, ‘We’ve come this far by faith, leaning on the Lord,'” he noted. “Our hope lies not in what is of our own doing. Our hope stems from a quiet, deep, even if at times dark and obscure, trust that the God of Shalom accompanies us, guides us, and will not abandon us.” 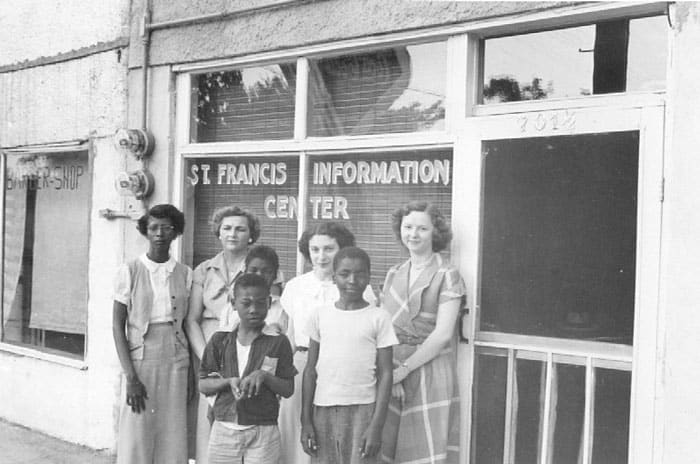 Members of Pax Christi are pictured in this 1952 photo outside of the St. Francis Information Center in Greenwood, Miss., with youths who came to the center. The Catholic organization was a key player in the civil rights movement. (CNS photo/Bishop Oliver Gerow, courtesy Diocese of Jackson Archives)

During its July 28-July 31 conference, Pax Christi USA commissioned four of its members as “teachers of peace”:

— Adrienne Alexander of Chicago is a promoter of student and young adult organizing within Pax Christi USA. She has made her career working as director of intergovernmental affairs for Council 31 of the American Federation of State, County and Municipal Employees, an Illinois union. Alexander also serves on the boards of Arise Chicago and the Catholic Labor Network.

— Tom Cornell of New York City can trace his time with the Catholic Worker movement to 1953, serving as managing editor of its newspaper, the Catholic Worker, for two years in the 1960s. Cornell was one of about a dozen people present at the meeting in July 1972 known as the “Pax Christi Affiliation Discussion” that gave birth to Pax Christi USA. Cornell also served as one of Pax Christi USA’s first National Council members beginning in 1976.

— Donna Toliver Grimes of Washington has worked since 2000 for the U.S. Conference of Catholic Bishops in social justice education, first with the Catholic Campaign for Human Development and then the Secretariat of Cultural Diversity in the Church, staffing the Subcommittee on African American Affairs.

— Phyllis Turner Jepson of West Palm Beach, Florida, was hired by Pax Christi USA in 1996 to serve as coordinator and later director of local and regional development. From 2004 to 2006 she was its program director. During her 10 years at the national office, Phyllis and her husband, Milton, traveled across the country visiting all Pax Christi regional offices, many local chapters, and went on peace missions to Haiti, El Salvador, Nicaragua and the Guantanamo Bay detention camp.

Featured image: Father Bryan Massingale, author of “Racial Justice and the Catholic Church” and a professor of ethics and theology at Marquette University, speaks during a Nov. 6, 2015, gathering in the Archdiocese of New Orleans. (CNS photo/Peter Finney Jr., Clarion Herald)