Thousands of migrants heading to the United States opting for one of the world’s most dangerous migration routes—through the Darién jungle.

It was basic, but the package was helpful for Montry, who has been stuck in Necoclí with her 2-year-old daughter and her husband for more than a week.

“We only expected to be here a couple of days,” said the Haitian migrant, who was traveling to the United States. “When you get stuck in a place like this, you begin to run out of money.”

Thousands of migrants heading to the United States are currently stranded in the Colombian port of Necoclí, as traffic grows along one of the world’s most dangerous migration routes.

Most of the migrants are Haitians and Cubans who had been living in South American countries like Brazil and Chile, but are moving because the pandemic has left them without jobs or made it harder for them to get resident visas in those countries.

To help migrants traveling from South America to the United States, Necoclí’s only parish is making food packages for migrant families stranded in the small town.

The road out of Colombia ends in Necoclí, and to get to Panama — the next country on the long route to the United States — migrants must take boats across the Gulf of Urabá, then make a weeklong trek through the Darién jungle, until they reach a village where the road toward North America resumes. 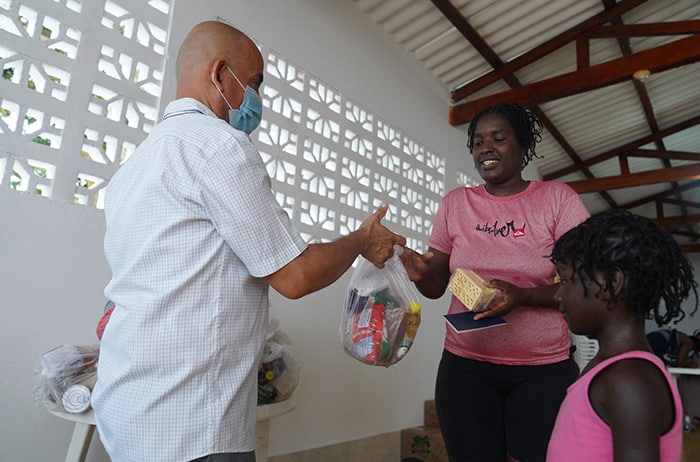 Father Henry Lopera talks with a Haitian migrant and hands out food packages in Necoclí, Colombia, Aug. 5, 2021. His parish has put together more than 300 food packages so far for migrants stranded in the town. (CNS photo/Manuel Rueda)

But currently the fleet of boats in Necoclí can only transport about 700 people each day, meaning that migrants like Montry can get stuck in town for up to two weeks, while they wait for their turn to board.

Father Henry Lopera of Necoclí said migrants were constantly arriving at the parish in July in search of help. That inspired him to come up with the food packages.

“We put some slips of paper in a pot with the names of different foods,” he explained. “And at the end of Mass, parish members would pick a paper that said what kind of food they would bring.”

So far, with the help of a group of Franciscan nuns, the parish has put together 300 food packages for migrant families. According to Necoclí’s mayor, around 10,000 migrants were stuck in the town at the end of July.

Once migrants are able to leave Necoclí, they face a different set of perils. The chief among them is crossing the Darién Gap, a 50-mile stretch of the rainforest where there are no roads.

The crossing on foot takes at least a week and starts in the Colombian village of Capurganá, where migrants pay locals up to $400 to guide them through the jungle. Those without funds get together in groups and attempt to make the trek on their own.

“It’s terrible,” said Danay Valdez, a Cuban migrant who has tried to cross the Darién Gap three times this year and failed. “There are deep rivers you have to cross and also parts where the trail is so steep that you have to climb with your hands like an alpinist.” 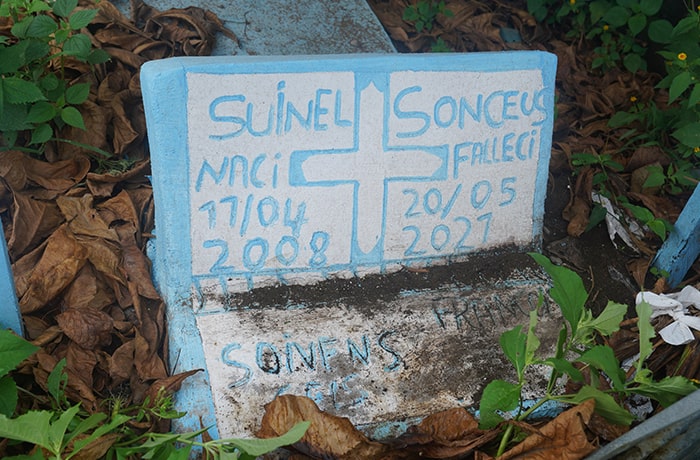 Valdez, who is traveling with her 17-year-old son, said that, during her first attempt, she fell and fractured her tailbone, two days into the trek. She couldn’t move for several hours and had to be abandoned by the rest of her group.

“I could have died in the jungle,” she said. “I had to gather all of my strength to turn back.”

She’s now staying in Capurganá with Rosa Espinoza, a 52-year-old Cuban migrant who also tried to cross the Darién Gap and failed.

Espinoza suffers from hypoglycemia and said she fainted during her first attempt to cross the jungle. During her second attempt, she slipped on a branch and sustained a deep wound in her left leg, which forced her to turn back.

“My son is in Kentucky and recently survived a traffic accident,” Espinoza said in tears. “I just want to be there to take care of him.”

Despite the dangers of the trek, the numbers of migrants passing through the Darién Gap is increasing. According to Panama’s National Immigration Service, more than 49,000 migrants have crossed the Darién this year and checked into shelters, where they get health services.

The number of crossings registered so far this year is greater than crossings for 2018, 2019 and 2020 combined.

Those who cross also face the risk of being robbed by armed groups that control drug-trafficking routes in the jungle. According to Doctors Without Borders, which runs three health posts on the Panamanian side of the Darién Gap, some women have been raped.

Bishop Hugo Torres of Apartadó, a Colombian diocese along the border with Panama, said it is urgent for officials in both countries to find a safer passage for migrants. That could include getting visas for them to travel on planes or finding a way to get migrants on boats to Panama, so they do not have to cross the jungle on foot.

“If these people arrive in Colombia, it should be the government’s responsibility to protect them,” Bishop Torres said. “We have to create a culture where migrants are respected as they make their way to the promised land.”

Featured image: Cuban migrant Danay Valdez and her son Raisel, who have have tried to cross the Darién Gap but failed, are pictured Aug. 7, 2021. Now they are staying in Capurganá, Colombia, where the trail through the jungle begins. (CNS photo/Manuel Rueda)