As COVID-19 variants spring up worldwide, the Catholic Church continues to play a key role in responding to the pandemic.

Catholic Relief Services is providing small loans and medical supplies in Nepal. The Tanzania Episcopal Conference is securing oxygen for hospitals. The Apostolic Vicariate of Iquitos, Peru, is running a front-line isolation center for people with the virus.

The vast list of programs and campaigns, which is growing as variants of the virus unleash new waves, has altered the way the church has operated. The response has created goodwill, but it also presents a host of new challenges for the church and the broader society.

“The church should truly find a way to continue our efforts, but also explore new ways of fighting poverty. Most of the people tell us, ‘We are going to die of hunger, not COVID.’ This is the dilemma,” said Jesuit Father Rigobert Minani, head of his order’s social apostolate for Congo and Angola.

A number of common threads are prominent among the efforts the church has taken in different countries. Food, protective gear, medical attention and, most recently, access to vaccines are key issues.

Father Charles Kitima, secretary-general of the Tanzania Episcopal Conference, said the principal work for the church in his country today is guaranteeing that people who get sick with the virus have access to medical attention.

“The Catholic Church runs more than 500 health facilities in the country, and we need to make sure that our hospitals are ready to support anyone who comes to get assistance. People are poor, and they do not have insurance, and our mission is to care for life,” he said. 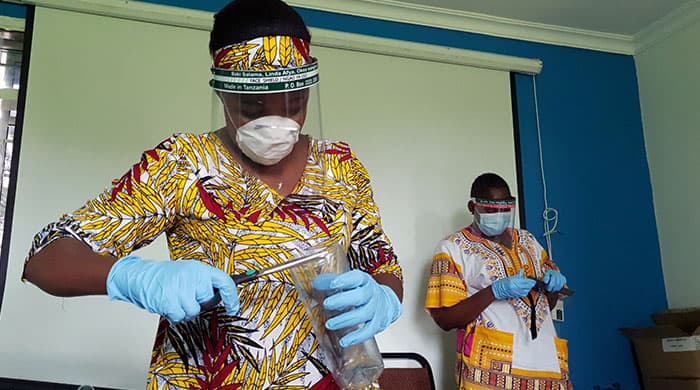 Workers prepare protective face shields from recycled plastics at the Zaidi Recyclers workshop in Dar es Salaam, Tanzania, May 21, 2020, during the COVID-19 pandemic. Although Tanzania’s late President John Magufuli, a Catholic who died in March of 2021, had downplayed COVID-19 testing and vaccines, the church continued to advise people to take preventive measures. (CNS photo/Reuters)

He said that while the church’s work at the start of the pandemic was making sure there were masks and protective gear, today it is treatment and getting people vaccinated. A top issue is oxygen.

The church-run Bugando Medical Center, one of the country’s largest hospitals with 900 beds, was using around 100 cylinders of oxygen a day in May, but it is now up to 300 cylinders a day. Father Kitima said the church was working with the government and international agencies, including the U.S. Agency for International Development, to secure oxygen. He said the situation has improved noticeably with the country’s new president, Samia Suluhu Hassan. She took over in March after her predecessor, John Magufuli, a denier of COVID-19, died of the virus.

“We had been in a kind of tug of war with the government, which was saying there is no COVID. But since March, we have been on the same page and working toward the same goal,” Father Kitima said.

Oxygen also has been a critical issue in Peru, where Breathe Peru, a program started by the Catholic bishops, has raised funds to acquire and install oxygen plants around the country. The program also includes the private Universidad San Ignacio de Loyola and Peru’s National Society of Industries.

Breathe Peru has raised around $2.7 million, allowing it to install 25 medicinal oxygen plants and 3,000 ventilators, as well as offer other supplies.

The program got its start with an initiative in Iquitos, in the northern jungle, that was the first city in Peru to be hit hard by the pandemic. The church in Iquitos mobilized quickly on many fronts, including organizing a public campaign to collect money for an oxygen plant.

Bishop Miguel Ángel Cadenas of Iquitos said the campaign worked on several levels. He said it created hope in the population when everything seemed bleak, and it got the government to act. Instead of one plant, the church was able to acquire five for Iquitos, which has a population more than 500,000 people.

“The campaign generated goodwill during a time of desperation. The church had a very positive impact,” said Bishop Cadenas.

Church efforts, however, have been hampered by structural problems and, most recently, by misinformation about vaccines. 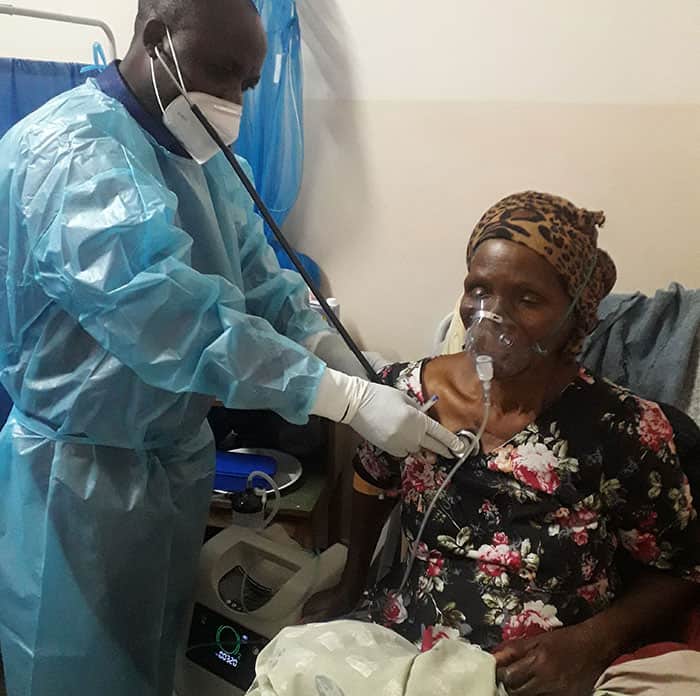 Patient Cecelia Phiri is assessed by Dr. Charles Nyasulu in the COVID-19 isolation center at St. John’s hospital in Mzuzu, Malawi, Aug. 13, 2021. (CNS photo/courtesy Father John Benjamin Moyo)
Bishop Cadenas said that while the church certainly helped with oxygen plants, its campaign could not fix the deeper issues that created the problem. He said Iquitos, and Peru in general, was not ready for the pandemic and is still not ready as a third wave threatens the country.

Peru today has the highest per capita number of deaths from COVID-19, according to Johns Hopkins University. Eastern neighbor Brazil is fifth, while Colombia, to the north, is 10th worldwide.

“We have oxygen plants, but the bigger problem is lack of health care professionals. It is a structural problem not only in Iquitos, but in other parts of Peru and the world,” he said.

He said CRS, which has had a full-time program in Nepal since the 2015 earthquake, has had a multipronged response to the pandemic, offering financial assistance to small businesses, supporting information campaigns and providing medical supplies to local hospitals. The final component runs up against structural shortages.

“Outside of a few urban areas, health care infrastructure in Nepal is insufficient. On top of that, we do not have enough front-line health care workers to fight the pandemic,” he said.

The newest complication is lack of vaccines and a rising tide of false information against them.

CRS in Nepal is preparing an information campaign that will target young people, encouraging them to get vaccinated. The country has vaccinated around 9% of its 28 million people.

Father Minani in Congo said the church needs to get ahead of anti-vaccine campaigns.

“There is false information about vaccines. The church has to preach in favor of vaccines,” he said. 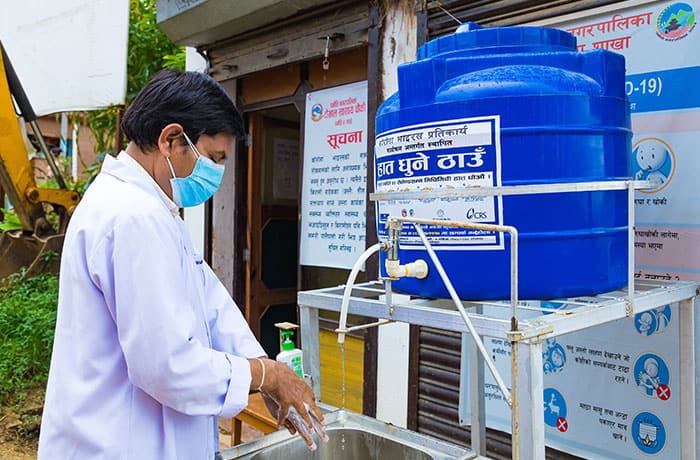 The Jesuits in Congo and Angola are running a COVID-19 information campaign that features the provincial for Central Africa, Father Rigobert Kyungu, on a poster calling for people to wear masks and get vaccinated.

“We have to campaign for vaccine justice. As Pope Francis said in ‘Fratelli Tutti,‘ people need to understand that we are in this together, and we have to ensure that all people have the same care,” said Jesuit Father Xavier Jeyaraj, director of the Jesuit Social Justice and Ecology Secretariat in Rome.

Pope Francis and cardinals from Brazil, El Salvador, Honduras, Mexico and the United States released a series of public service announcements in August encouraging people from across the Americas to get vaccinated. Pope Francis said in his segment that vaccines “offer hope to end the pandemic, but only if they are available for all and if we collaborate with each other.”

Father Jeyaraj said the church not only has to stand for equal access to care, but must be ready to respond if the pandemic is used as an excuse by some leaders to harden their grip on power.

An Indian by birth, Father Jeyaraj is concerned by what he describes as “authoritarian actions” by Indian Prime Minister Narendra Modi that are disguised as anti-COVID-19 actions.

“Laws have been enacted, which bypassed all procedures, that have hurt millions of farmers and benefited corporations. The government has done nothing to heed the cries of these farmers,” he said.

Mass demonstrations against the laws began in late 2020 and continue today. The laws, according to critics, create monopolies over different agriculture products, with corporations subcontracting production.

Father Jeyaraj also said the government is responsible for the death of Jesuit Father Stan Swamy, 84, who died in July after being arrested in 2020. Father Swamy was charged with “terrorism,” an allegation he always denied and which Father Jeyaraj called absurd.

“He died of complications from COVID and other illnesses because he spent months in a prison in terrible conditions. Nothing was right about his case and the other ‘terrorism’ cases. They can arrest anyone just using the terrorism claim,” he said.

The priest said the church has to be ready to stand with all people, especially the most vulnerable, because the pandemic is not over.

“COVID-19 has had an impact on the political, economic and spiritual front, the way the church operates in the world. We need to understand the crisis in a realistic way in order to respond to it. It is not going away,” he said.