VANCOUVER, British Columbia (CNS) — Mildred Moy wears a vest with the words “Catholic Street Missionaries” as she walks down Vancouver’s dirtiest streets, looking for people who are down on their luck and hoping to talk to them.

With a disproportionate number of First Nations people among the Downtown Eastside’s homeless and drug addicted population, Moy hopes being visible will help her become a bridge and vessel for healing rifts between Indigenous people and the church.

“The First Nations people are really dear to our hearts, and these are the brothers and sisters God called us to serve. When they grieve, we grieve too,” Moy told The B.C. Catholic, newspaper of the Archdiocese of Vancouver.

“The news of the graves reminded me why a lot of the First Nations people are on the streets and addicted. They really suffered abuse and generational traumas.”

Moy, who founded Catholic Street Missionaries in 2016, admits when news broke in May about the discovery of unmarked graves at a former residential school in Kamloops, she feared wearing her vest would make her a target or hinder her ministry.

She has found that by and large, it hasn’t.

“They are very lovely people. Most of the time they are very appreciative of what we are doing for them. They don’t really care if we are from the Catholic Church. They see our sincerity.”

CSM volunteers walk along regular routes in the Downtown Eastside, offering a listening ear, encouragement and prayer for anyone who would like it. It’s a simple ministry that Moy believes has made a difference.

“A lot of things we see being changed because of prayer, so it’s really going out to see the pain and then we pray, that’s our ministry.”

The majority of those they encounter on the streets are of First Nations descent. After word of unmarked graves began circling on the streets, Moy decided to launch a prayer wall, where her missionaries and others can sign up to pray for healing, reconciliation, and repentance. 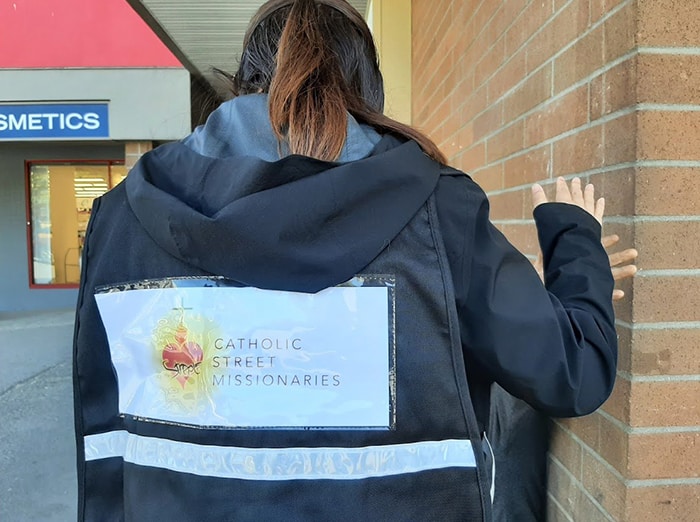 Rosemary Ip, a volunteer with Catholic Street Missionaries, prays with a person on a street in Vancouver July 11, 2021. With a disproportionate number of First Nations people among the Downtown Eastside’s homeless and drug addicted population, Ip and others hope being visible will help become a bridge and vessel for healing rifts between Indigenous people and the Church. (CNS photo/Catholic Street Missionaries via B.C. Catholic)

Her goal is to have people praying every day for a full 215 days, the number representing the graves initially assumed to be on Kamloops Indian Residential School land.

“This is such a big issue and it’s so hard to solve from the human place, but God can make all things possible.”

The prayer wall launched June 11 and will be active until Jan. 12, 2022. Anyone can sign up to pray and view the number of people praying alongside them.

Moy has also sought other, simple ways to reach out and build relationships, including learning a few words in First Nations languages.

“There was this First Nations person, he was looking very desperate and in despair, so we reached out to him. We didn’t know him, so I said ‘hi’ in Cree,” said Moy.

“He opened up to us and wanted us to pray for him. After the prayer, he changed! He was smiling and happy.”

In more hostile encounters with Indigenous or non-Indigenous people angry over the Catholic Church’s role in residential schools, CSM volunteers have offered apologies.

“We think it’s okay for us to apologize,” she said. “One person’s sin affects the whole body of Christ.”

Moy hopes the Prayer Wall shows Catholics one small way they can participate in healing. “I wish that more people would pray. God will hear our prayer. God can do anything.”

She adds she’ll continue to wear her “Catholic” label on the streets, hoping the bridges she builds will lead to positive, lasting encounters between people of faith and people deeply wounded by representatives of the church.

“If they like what we do and they find out we are Catholic, hopefully that will be a positive experience that will lessen their resentment of the church and of God.”

Ruck is assistant editor of The B.C. Catholic.