The bishops who head the El Paso and Dallas dioceses in Texas have asked Gov. Greg Abbott to halt an order that could result in shutting down, by the end of August, Catholic Charities facilities in Texas that care for foster and migrant children, saying that doing so violates state laws protecting religious freedom.

“Motivated by our faith, Catholic Charities provides food, clothing and shelter to these children, following Jesus’ command to care for orphans and widows in their distress, to welcome the stranger and to care for those who suffer. But this work is now in peril,” wrote Bishops Edward J. Burns of Dallas and Mark J. Seitz of El Paso in an opinion piece published by The Dallas Morning News July 18.

“A recent state-level executive order will soon strip the child care licenses from any organization that provides shelter to migrant children, including the six child welfare programs operated by Catholic Charities in Texas,” they said.

In early June, Abbott ordered child care regulators in Texas to take away licenses from facilities that provide shelter and other services to migrant children who crossed the U.S.-Mexico border illegally. Some facilities, such as Catholic Charities, have federal contracts with the Office of Refugee Resettlement to help care for them.

Shutting down the facilities could leave foster children that Catholic Charities cares for without homes and send immigrant children to mass facilities by Aug. 31 “in violation of state laws protecting religious freedom,” the bishops wrote. 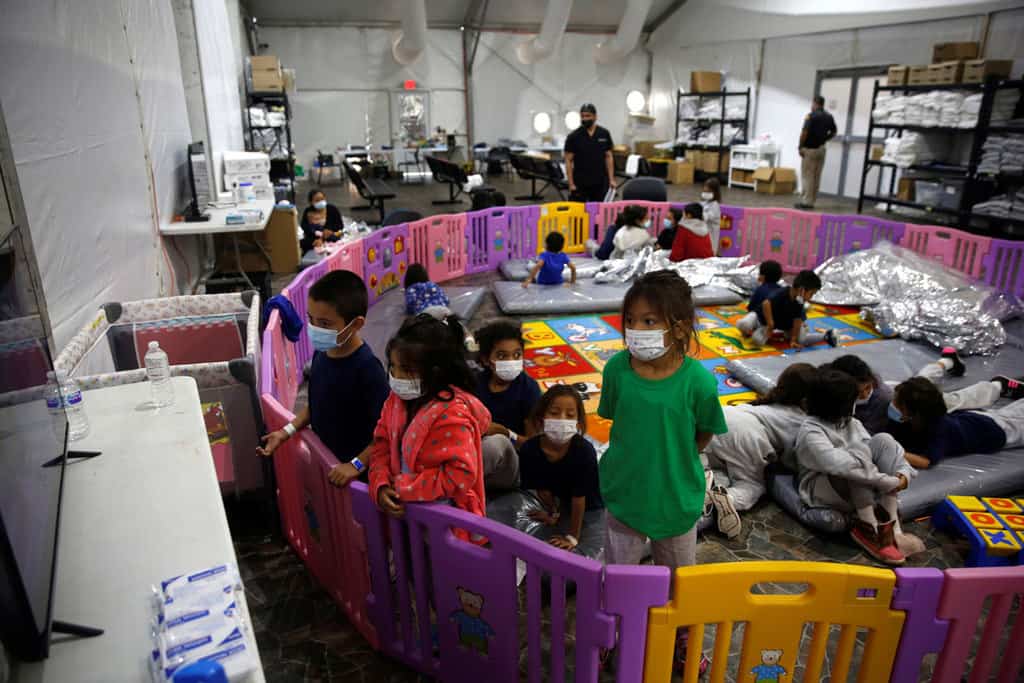 Young unaccompanied migrants, ages 3 to 9, watch television inside a playpen March 30, 2021, at the holding facility in Donna, Texas, set up in February by U.S. Customs and Border Protection, an agency within the Department of Homeland Security. (CNS photo/Dario Lopez-Mills, Pool via Reuters)

The directive is part of a proclamation that the Republican governor said in a May 31 letter responds to an “ongoing surge of individuals unlawfully crossing the Texas-Mexico border,” which “poses an ongoing and imminent threat of widespread and severe damage, injury, loss of life” to certain counties in the state.

The bishops argued, however, that it denies the Catholic facilities the opportunity to carry out their ministry, which is driven by faith beliefs that command Christians to care for the vulnerable.

“And it would remove state-level conscience protections for Catholic Charities, exposing us to regulation and pressure from those who do not share our commitment to the dignity, safety and well-being of mothers and children,” they wrote in the editorial.

Those who work for places such as Catholic Charities are driven by faith and a calling to help those who suffer, the bishops said.

“The state of Texas has an opportunity to protect children and live up to its commitment to religious freedom. Doing this helps both unaccompanied minors and Texas-born foster children,” they wrote. “It also follows state laws that were put in place to protect the religious freedom and conscience rights of those who care for children.”

They added, “Texas should continue to follow the example it has set for protecting religious freedom and life by supporting much-needed social services providers like Catholic Charities in their commitment to serve all vulnerable children.”

Feratured image: Migrant children from Central America take refuge from the rain in the back of a U.S. Border Patrol vehicle in Penitas, Texas, March 14, 2021, as they await to be transported after crossing the Rio Grande into the United States. (CNS photo/Adrees Latif, Reuters)