The first World Day for Grandparents and the Elderly is an opportunity to be “angels,” who care, console and caress, Pope Francis says.

VATICAN CITY (CNS) — Highlighting the importance and gifts of older people has been a constant refrain throughout Pope Francis’ ministry.

So it seemed only a matter of time before the pope would establish the World Day for Grandparents and the Elderly, which was to be July 25. It comes after he created the World Day of the Poor several years ago, showing how the pope considers these world days to be a powerful and universal reminder to the faithful to rediscover or strengthen their service to and relationships with the forgotten or discarded members of the human family.

But he had a reason for inaugurating the day for elders in 2021: After more than a year of a global pandemic, which left a huge number of older people isolated, hospitalized or dead, there are finally signs in some parts of the world of a new horizon.

“Even at the darkest moments, as in these months of pandemic, the Lord continues to send angels to console our loneliness and to remind us: ‘I am with you always,'” the pope said in his message for the world day.

“That is the meaning of this day, which I wanted to celebrate for the first time in this particular year, as a long period of isolation ends, and social life slowly resumes. May every grandfather, every grandmother, every older person, especially those among us who are most alone, receive the visit of an angel!” he wrote.

The World Day for Grandparents and the Elderly is a call for the faithful to flex their wings and be those “angels,” who care, console and caress.

Respecting, honoring and reaching out to one’s elders is not just for do-gooders checking off their compliance with the Fourth Commandment. According to Pope Francis, it is the only way a society can thrive, and the church can remain faithful. 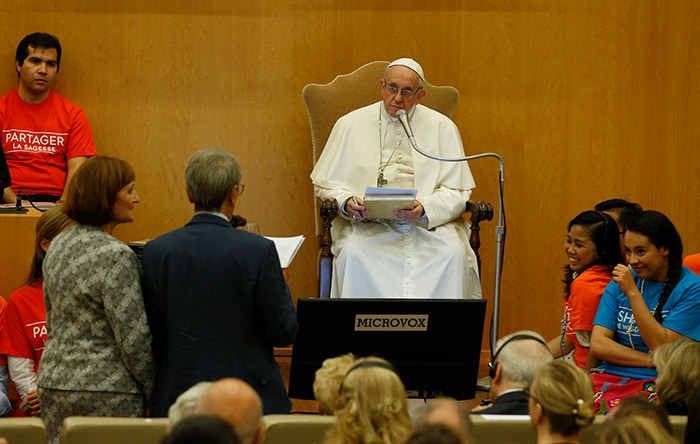 Pope Francis listens as a couple asks a question during the release of the book, “Sharing the Wisdom of Time,” in Rome Oct. 23, 2018. In the book the pope offers commentary on the life stories of older people throughout the world. (CNS photo/Paul Haring)

“In a civilization in which there is no room for the elderly or where they are thrown away because they create problems, this society carries with it the virus of death,” he said in a March 2015 general audience talk dedicated to the elderly.

As with everything Pope Francis highlights, it is a two-way street. Not only must people reach out to and serve their elders, older people have to step up and do their part in living out their vocation in whatever ways they can, adapting to the unexpected limitations and challenges they may face.

It’s a message that dovetails perfectly with the pope’s recent encyclical, “Fratelli Tutti,” which calls everyone to wipe away a tired and cynical view of the world and instead be driven by compassion to take action.

Because “we are all indebted to one another, we are all brothers and sisters,” and no one can be saved or improve the world alone, he said in his world day message, the elderly “are needed in order to help build, in fraternity and social friendship, the world of tomorrow: the world in which we, together with our children and grandchildren, will live once the storm has subsided.”

“You need to show that it is possible to emerge renewed from an experience of hardship” and to “use those experiences to learn how to pull through now,” he told his older peers. In essence, who better to give the world hope than those who have already lived through and endured decades of joys and sorrows.

The pope brought together thousands of older people in September of 2014 for a meeting and Mass in their honor in St. Peter’s Square. Even retired Pope Benedict XVI was in attendance.

There, as elsewhere, he used the metaphor of a tree to describe their role — the elderly are the roots that nourish the tree, helping it bear new fruit. 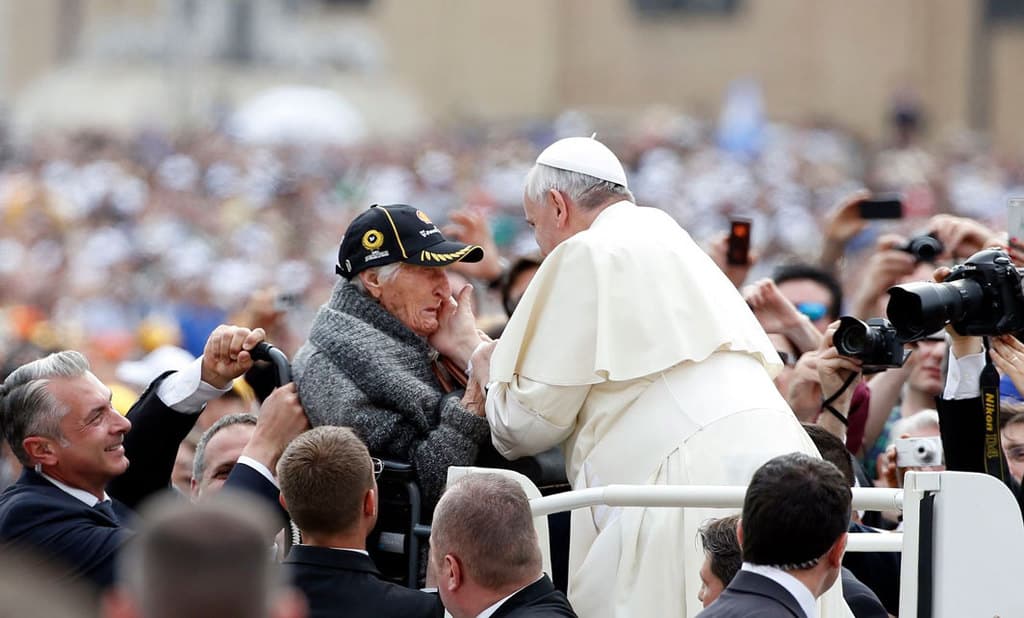 An elderly woman becomes emotional as Pope Francis greets her as he arrives for a May 2014 weekly audience in St. Peter’s Square at the Vatican. Pope Francis wanted the first World Day for Grandparents and the Elderly on July 25 to be inaugurated as the world seeks to recover from a deadly pandemic, calling for the faithful to be “angels,” who care, console and caress. (CNS photo/Tony Gentile, Reuters)

A connection – dialogue – is essential. This encounter between the elderly and the young is “for the construction of a society that is more just, more beautiful, more supportive, more Christian,” he said in a talk with members of two Italian associations of seniors in October 2019.

“If grandparents do not dialogue with grandchildren, there will be no future. We are all called upon to counter this poisonous throwaway culture,” he said.

But those conversations must be filled with patience, tenderness and understanding, he said. “Do not berate them. No. Listen to them, and then sow something.”

Or, as he said at an intergenerational meeting presenting the book, “Sharing the Wisdom of Time,” in 2018, even silent witness to one’s faith is enough.

He recalled how his grandmother Rosa wasn’t a big talker, but her deep faith and example still left a huge impression on him.

At that meeting an older couple asked the pope what they should do when, despite all their efforts, their children and grandchildren have not embraced their Catholic faith.

“Faith is shared in dialect,” the pope said, meaning, not with the standardized words of dogma and the catechism, but with the language of love, friendship and encouragement, because faith does not come just from content.

He said they did not fail in their duty, it’s that sometimes life just unfolds that way, with children either unconsciously following current trends or losing their faith because of “terrible witnesses” and scandal by church members.

They must be at peace, he said at that meeting, and they must never argue or debate with their children or grandchildren about the faith but instead listen, show love, understanding, patience, be good witnesses and pray.

He said it gives him strength to remember “when Joseph and Mary took the baby Jesus to the temple where they met the two grandparents, who were the wisdom of the people; they praised God because this wisdom was able to continue with this child. Jesus was received in the temple not by the priest, but by grandparents.”

Featured image: An elderly woman reacts as she meets Pope Francis during his general audience in St. Peter’s Square at the Vatican in this March 22, 2017, file photo. Pope Francis wanted the first World Day for Grandparents and the Elderly on July 25 to be inaugurated as the world seeks to recover from a deadly pandemic, calling for the faithful to be “angels,” who care, console and caress. (CNS photo/Paul Haring)