HAVANA (CNS) — The Christian Liberation Movement in Cuba has called on people to continue to pressure communist authorities to hold a general election.

The country has seen demonstrations in its major cities joined by thousands of people to protest the unprecedented scarcity of essentials and the rising death toll caused by COVID-19. A few thousand people took to the streets July 11 in a rare anti-government protest in Cuba where some demonstrators chanted “Down with the dictatorship,” ucanews.com reported.

The protests erupted amid growing anger because of long food lines and a shortage of medicines while coronavirus infections and deaths continued rising. 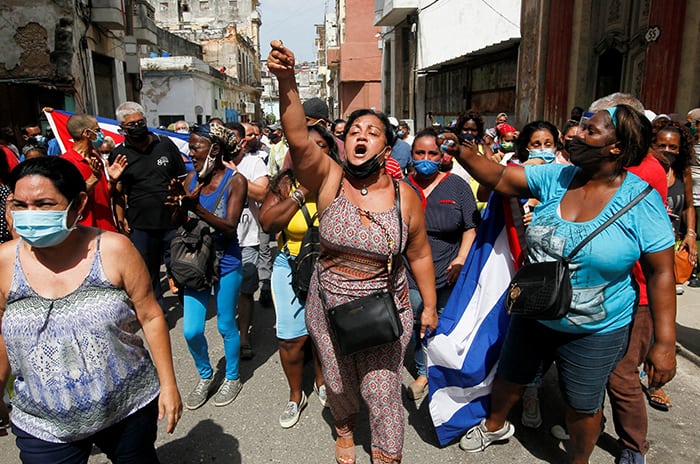 Government supporters react during protests in Havana July 11, 2021. Thousands of Cubans took to the streets in rare anti-government demonstrations to protest a lack of food and medicine as the country undergoes an economic crisis aggravated by the COVID-19 pandemic and U.S. sanctions. (CNS Photo/Reuters)

Eduardo Cardet Concepción, national coordinator of the Christian Liberation Movement, known as MCL for its initials in Spanish, said thousands of Cubans were demanding freedom and an end to repression and misery.

“The MCL, as part of this people tired of oppression and injustice, is fully identified with their desires. We support our brothers and sisters of the Christian Liberation Movement and all Cubans who demonstrate peacefully, making use of this legitimate right,” the organization said in a statement.

The group also demanded “the release of political prisoners, the annulment of the repressive laws against freedom, recognition of economic rights of free enterprise for Cubans, and recognition of each Cuban’s — inside and outside the island — right to vote and to be elected,” it said.

Catholic dissident Oswaldo Payá Sardinas founded MCL in 1988 to achieve peaceful democratic reform in Cuba. At the time, he said he was explicitly inspired by the Catholic social teaching. 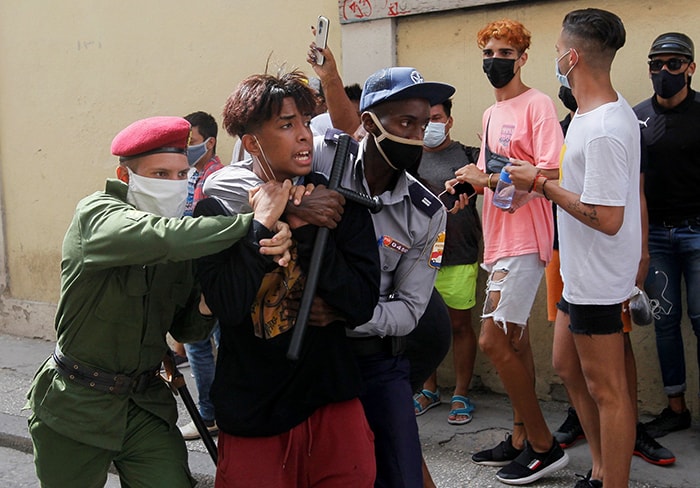 Police detain a person during protests in Havana July 11, 2021. Thousands of Cubans took to the streets to protest a lack of food and medicine as the country undergoes a grave economic crisis aggravated by the COVID-19 pandemic and U.S. sanctions. (CNS Photo/Reuters)

Taking advantage of a loophole in Cuba’s constitution, Payá organized a collection of signatures to introduce democracy in the country. As a consequence, the movement was persecuted nationwide and 42 of its leaders were imprisoned during the 2003 wave of repression known as the “Cuban Spring.”

Paya and another MCL leader, Harold Cepero, were killed in a car accident in suspicious circumstances July 22, 2012.

During a speech on television July 11, Cuban President Miguel Díaz-Canel, who also heads the Communist Party, blamed the United States for the unrest and called on “all the revolutionaries in the country, all communists, to take to the streets and go the places where these provocations are going to occur” to counter protests. 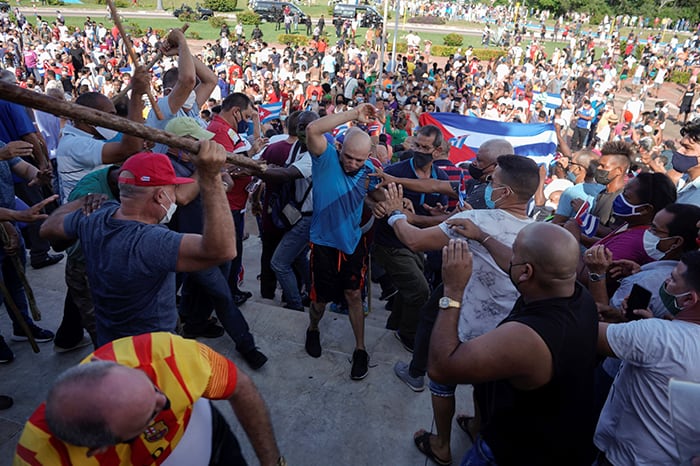 People clash with plainclothes police during protests in Havana July 11, 2021. Thousands of Cubans took to the streets to protest a lack of food and medicine as the country undergoes a grave economic crisis aggravated by the COVID-19 pandemic and U.S. sanctions. (CNS Photo/Alexandre Meneghini, Reuters)

The MCL condemned violence from any side and criticized Díaz-Canel’s call for confrontation among Cubans.

“No more sorrowful cries. It is time to react and tell the tyrants that their reign of terror and misery has come to an end. Only the people can save the people,” the group said in its statement.

The Associated Press reported that the demonstration in Havana grew to a few thousand as people marched through the capital despite being charged by charges by police officers, who also fired tear gas on the crowd. People standing on balconies applauded the protesters as they passed by while others joined the march.

Cuban authorities shut down internet service as the demonstration grew and protesters attempted to use cellphones to broadcast the protest live.

In a statement released by the White House July 12, President Joe Biden said the United States stands with the people of Cuba in their call for freedom and relief from the pandemic and decades of repression and economic suffering.

“The Cuban people are bravely asserting fundamental and universal rights,” Biden said. “Those rights, including the right of peaceful protest and the right to freely determine their own future, must be respected.”

Featured image: Government supporters hold a photograph of late Cuban President Fidel Castro during protests in Havana July 11, 2021. Thousands of Cubans took to the streets in rare anti-government protests against a lack of food and medicine as the country undergoes a grave economic crisis aggravated by the COVID-19 pandemic and U.S. sanctions. (CNS Photo/Alexandre Meneghini, Reuters)