In a unanimous decision, court says TPS recipient who entered unlawfully is “not eligible” for permanent residency.

WASHINGTON (CNS) — A June 7 U.S. Supreme Court decision ruled that hundreds of thousands of immigrants with a temporary immigration status cannot apply for a more permanent way to remain in the country if they first entered without authority to do so.

The unanimous ruling applies to those with Temporary Permanent Status, popularly known as TPS — an estimated population of 400,000 immigrants from countries such as El Salvador, Haiti and Myanmar.

They have been allowed to live and work in the U.S. for a variety of humanitarian reasons and while the ability to stay is considered temporary, many have been in the country for decades and now call the U.S. home.

The court’s decision hinged on how the person first entered the United States.

The ruling held hope to those who were granted the status after they entered the U.S. with student or tourist visas, even if the documents eventually expired. But many, like plaintiff Jose Santos Sanchez, of El Salvador, applied and qualified for TPS after entering the country “unlawfully.”

In those cases, the high court ruled, “a TPS recipient who entered the United States unlawfully is not eligible” to become a permanent resident, a status that would put the person on a path toward citizenship. 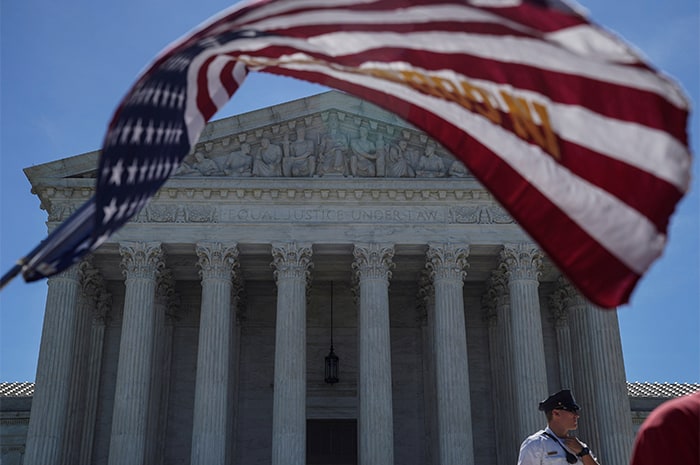 However, Justice Elena Kagan, who wrote the decision, said there’s “legislation pending in Congress” that could help the group. The House of Representatives has passed a bill that “could do just that,” Kagan wrote. However, it faces an uncertain passage in the Senate, where it would have to pass before the president can sign it into law.

The pro-immigrant organization CASA said in a statement shortly after the decision that the court ruled “against immigrants” and was denying many the ability to obtain “green cards,” permanent residency documents that would grant protection and the opportunity at eventual citizenship.

“Ultimately, this ruling demonstrates once again the urgent need for legislative reform for immigrant communities in the United States. The immigration laws are broken and all TPS holders, many of whom have lived in the U.S. for decades and have been working as essential workers during the COVID-19 pandemic, deserve a path to citizenship,” said Gustavo Torres, CASA’s executive director.

The organization called on Congress to pass legislation to “correct this unfair decision.”

Citizens from Honduras, Nepal, Nicaragua, Somalia, South Sudan, Sudan, Syria, Venezuela and Yemen benefit from TPS granted because of their nations’ ongoing armed conflict, natural disasters such as earthquakes or hurricanes, or other extraordinary conditions.