VATICAN CITY (CNS) – Pope Francis called for a global fight against the virus of “closed nationalism” and lack of concern for the poor by supporting “the temporary suspension of intellectual property rights” that prevent the widespread manufacturing of COVID-19 vaccines.

Describing himself as an “old man who does not dance or sing like you, but who believes, like you, that injustice and evil are not invincible,” the pope sent a message to the “Vax Live” concert, which was taped May 2 in California with an audience of fully vaccinated health care and essential workers.

The concert to promote “vaccine equity” and raise money for vaccines for poor countries for the World Health Organization’s COVID-19 Solidarity Response Fund was broadcast globally May 8.

In his message, Pope Francis urged the world not to forget the world’s poorest and most vulnerable people who have endured and continue to endure the heaviest toll of suffering and death because of the coronavirus pandemic.

“In the face of so much darkness and uncertainty, we need light and hope,” the pope said. “We need paths of healing and salvation. And I mean healing at the root, healing the cause of the evil and not just the symptoms.”

The first cause, he said, is “the virus of individualism, which does not make us freer or more equal or more brotherly or sisterly, but rather makes us indifferent to the suffering of others.”

“Closed nationalism,” which is not simply concern for one’s citizens first, but also a lack of concern for others, is “a variant” of the virus of individualism, he said. And when combined with putting “the laws of the market or intellectual property above the laws of love and the health of humanity,” people suffer. 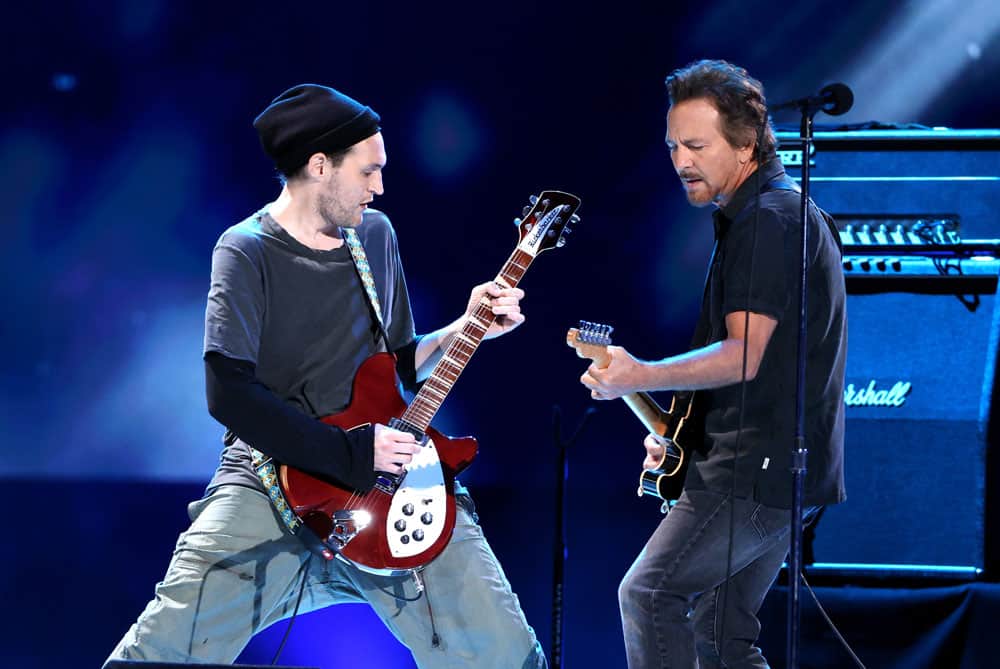 In this image released May 2, 2021, Josh Klinghoffer and Eddie Vedder perform onstage during Global Citizen “Vax Live: The Concert To Reunite The World,” at SoFi Stadium in Inglewood, Calif. The concert was broadcast May 8 and included messages from Pope Francis and U.S. President Joe Biden. (CNS photo/Kevin Winter/Getty Images for Global Citizen VAX LIVE)
The day that the “Vax Live” concert was broadcasted, the pope sent a message to close a May 6-8 conference on healthcare organized by Pontifical Council for Culture, its Science and Faith (STOQ) Foundation and the New York-based Cura Foundation and Stem for Life Foundation. In his message, the pontiff thanked health care workers committed to caring for the sick and supporting those in great need.

“All of us are grateful in these days to those working tirelessly to combat the pandemic, which continues to claim many lives, yet at the same time has represented a challenge to our sense of solidarity and authentic fraternity,” he said in a video on May 8. “For this reason, concern for the centrality of the human person also demands reflection on models of health care that are accessible to all the sick, without disparity.”

The pope’s remarks in the video for the “Vax Live” concert echoed comments he had made on Christmas when he questioned the wisdom and ethics of strictly enforcing patent protections when so many people were dying and suffering, both physically and economically, from the coronavirus. At that time, he urged “everyone–government leaders, businesses, international organizations–to foster cooperation and not competition, and to seek a solution for everyone: vaccines for all, especially for the most vulnerable and needy of all regions of the planet.”

While patents allow the pharmaceutical companies that invested in the vaccines’ development to be rewarded for their work, many have argued that the massive government funding of the research and development means the vaccine formulas are a common good that can and should be shared.

Pope Francis told the Vax Live audience, “God the creator instills in our hearts a new and generous spirit to abandon our individualism and promote the common good: a spirit of justice that mobilizes us to ensure universal access to vaccines and the temporary suspension of intellectual property rights; a spirit of communion that allows us to generate a different, more inclusive, just and sustainable economic model.”