Four Killed in Military Attack on Church in Myanmar

Catholics were sheltering in the church due to fighting between the Myanmar military and an anti-coup resistance group.

Four people died when a Catholic church came under attack from the military in a Catholic stronghold in eastern Myanmar.

Sacred Heart Church in Kayanthayar Parish near Loikaw, the capital city of Kayah state, came under fire around 1 a.m. on May 24.

More than 300 people from at least 60 families had taken refuge in the church compound due to fighting between the military and an anti-coup resistance group known as the People’s Defense Force (PDF) over the weekend. The roof, ceiling and cross of the church were damaged and at least four other people were injured. All those killed or wounded were Catholics.

Myanmar has been in political turmoil since the military seized power on Feb. 1 and conducted a brutal crackdown against anti-coup protesters and other civilians that has led to at least 815 people been killed.

Father Soe Naing, a spokesperson for Loikaw Diocese, said all those sheltering in the church had fled by the time church officials checked the damaged building on May 24 morning. He said thousands of people have taken refuge at churches, priests’ centers and nuns’ convents because they are deemed to be safe. 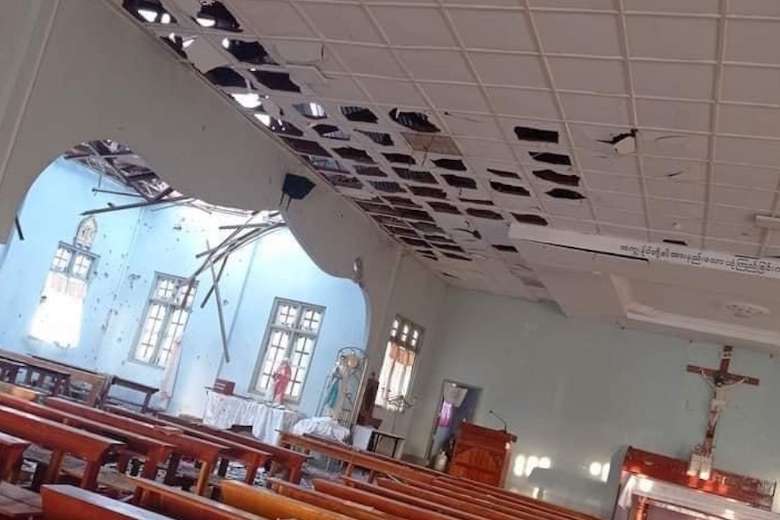 The roof and ceiling of Sacred Heart Church in Kayanthayar Parish near Loikaw, the capital city of Kayah state, Myanmar, were damaged by the military attack on May 24. (Photo: CJ)

“The Church is responding to humanitarian assistance but it’s a challenge for us as the number of internally displaced persons is increasing as a result of more fighting,” Father Soe Naing told UCA News.

Catholics have condemned the attack on the church on social media as unacceptable.

Clashes have been raging in eastern Myanmar over the weekend, especially in Demoso township in Kayah state and Mobye township in neighboring Shan state.

Anti-coup fighters seized and burned down a police station, killing at least 13 police officers in Mobye town in Shan state on May 23, according to media reports.

The military launched airstrikes in Demoso town in Kayah state on the evening of May 23, while tanks and trucks with soldiers were heading into Demoso town on May 24 morning, according to local sources. 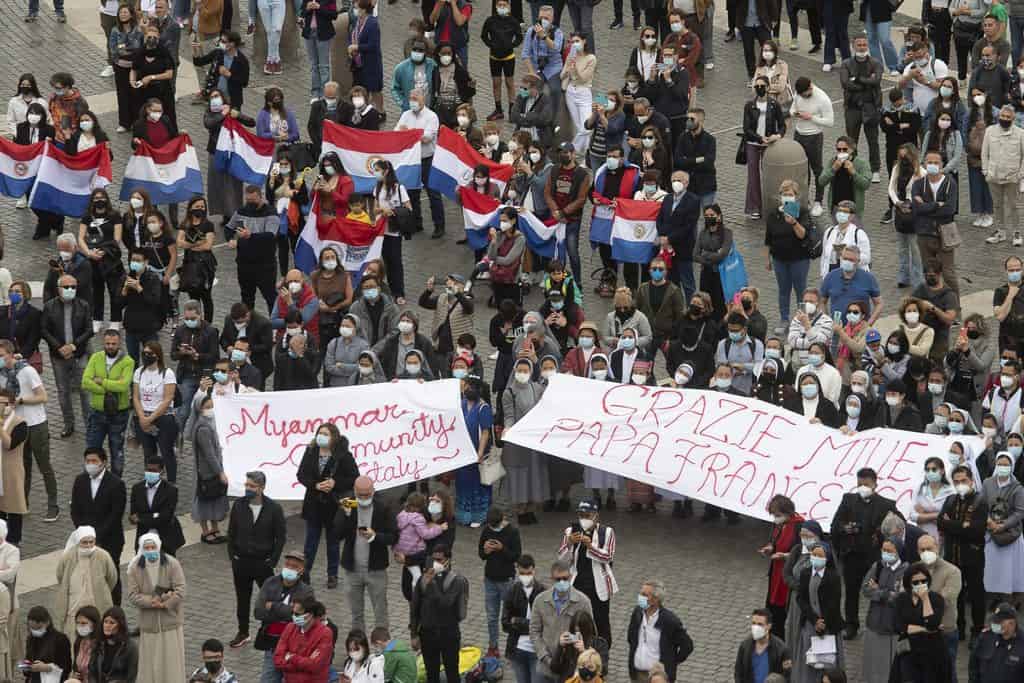 Members of the Myanmar community hold banners in St. Peter’s Square as they attend the recitation of the “Regina Coeli” led by Pope Francis from the window of his studio overlooking the square at the Vatican May 17, 2021. (CNS photo/Vatican Media)

Fighting is also raging in ethnic areas such as Karen, Kachin and Chin states, which have large Christian populations, as the military steps up its offensive against ethnic guerrillas and anti-coup resistance groups by deploying fighter jets and heavy artillery.

More than 60 Christian churches have been destroyed in Kachin state since a long-standing ceasefire broke down in 2011, according to Christian Solidarity Worldwide.