Churches Help Those Displaced in Mozambique by Islamist Militants

“They arrived with trucks at dawn … and shot my husband and children,” says woman widowed in Mozambique attack.

Sitting on a narrow bench and squashed between her two children in Nampula, Mozambique, Stella Miguel lamented that the government soldiers did not come to protect her family when Islamist militants raided their village in March and killed dozens of residents, including her husband and other three children.

“It pains me when I remember how my family was murdered mercilessly by the militants,” said Miguel, 38. “They arrived with trucks at dawn and started shooting and shot my husband and children. The militants killed many people and raped women.”

Miguel escaped from her home in the gas-rich town of Palma in northern Cabo Delgado province and took refuge at the Catholic Church compound in Nampula. She is among more than 60,000 people living in Nampula in various camps following spate of attacks by a group of armed Islamist militants known locally as al-Shabab.

Cabo Delgado province is rich in natural gas deposits; Islamic insurgents have been in the area since 2017. More than 2,700 people have died and more than 670,000 others have been displaced, according to the Armed Conflict Location and Event Data project.

“Life has been too hard since we arrived at this church. There are no houses for people to live, and it’s raining. There’s no drinking water, food, blankets and sanitation,” said Miguel, who is afraid of a cholera outbreak amid heavy rains and flooding. 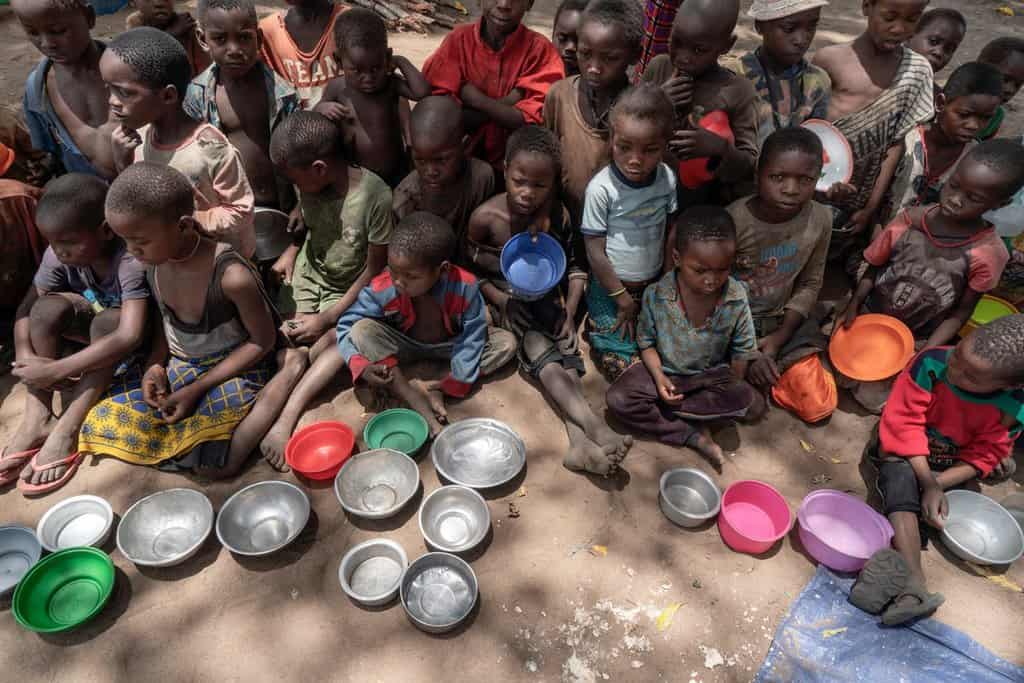 Displaced children gather in a camp in Mozambique’s Cabo Delgado province in this 2019 photo. Residents in northern Mozambique, a region rich in natural gas deposits, have been grappling with an Islamist insurgency since 2017. (CNS photo/Alessandro Grassani, courtesy AVSI)

But the Catholic Archdiocese of Nampula is trying to fill that gap, making an effort to help those in need of shelter, clothing, blankets, food and other supplies. The church leaders are also constructing houses for victims of terror attacks who are currently being hosted by the archdiocese.

Archbishop Inácio Saure of Nampula said more than 3,000 displaced people will benefit from the housing project, which has support from the Southern African Catholic Bishops’ Conference.

Archbishop Saure, who is also vice president of the Mozambican bishops’ conference, said the archdiocese has been providing emergency food assistance and basic needs such as water, clothing, blankets and sanitation.

“The situation is becoming bad to worse, especially with the new cases of cholera,” said Archbishop Saure, noting that the number of children at the camps was overwhelming. “We are trying to avert the situation by providing shelter, food and emotional support.” 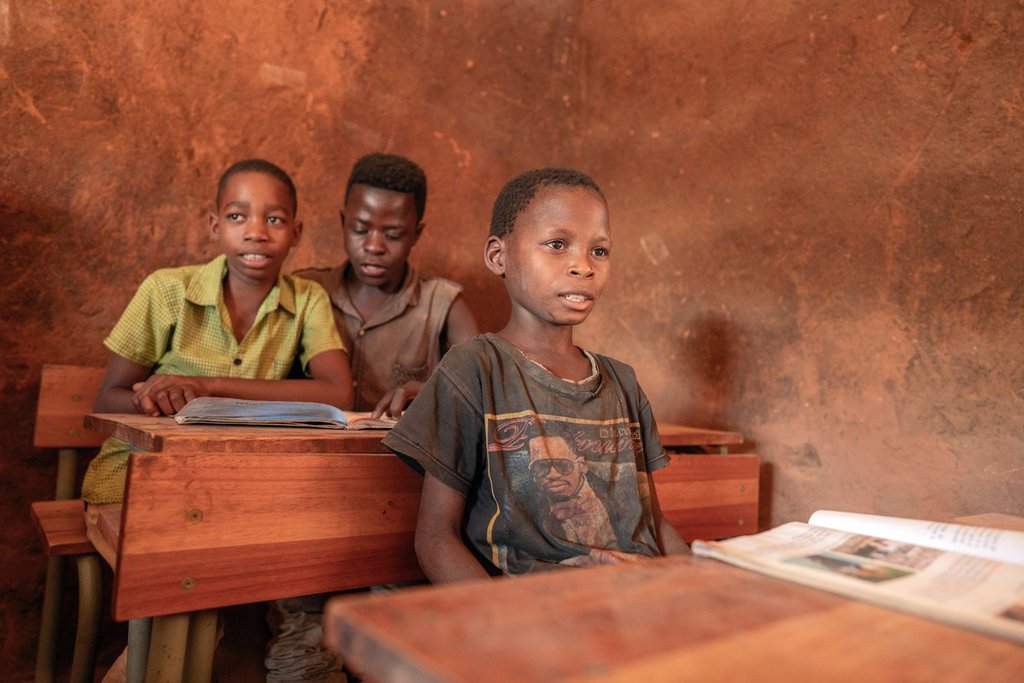 Displaced boys participate in school work in a camp in Mozambique’s Cabo Delgado province in this 2019 photo. Residents in northern Mozambique, a region rich in natural gas deposits, have been grappling with an Islamist insurgency since 2017. (CNS photo/Alessandro Grassani, courtesy AVSI)

Catechist Victor Tembo said the archdiocese is helping people of different faiths who are living in church compounds after fleeing terror attacks from their homes.

“We are not asking about people’s religion,” he said. “We have both Christians and Muslims living in the Catholic Church without any problem. They love and encourage one another, especially during these hard and uncertain times.”

Luisa Abdul, a young Muslim mother, said it was time for residents of northern Mozambique to work together, regardless of their faith, to stop attacks from the rebels affiliated with the Islamic State group.

“They are killing everyone, both Christians and Muslims,” said the mother of three, who fled her home in April 2020 after insurgents raided her village. “We cannot accept to be divided along religious lines because we are all suffering. The government should help us defeat these terrorists.”

In Pemba, a port city in northern Mozambique that has been the target of multiple terrorist attacks, Brazilian La Salette Father Edegard Silva is using puppets to provide psychosocial support to hundreds of children who have undergone trauma. 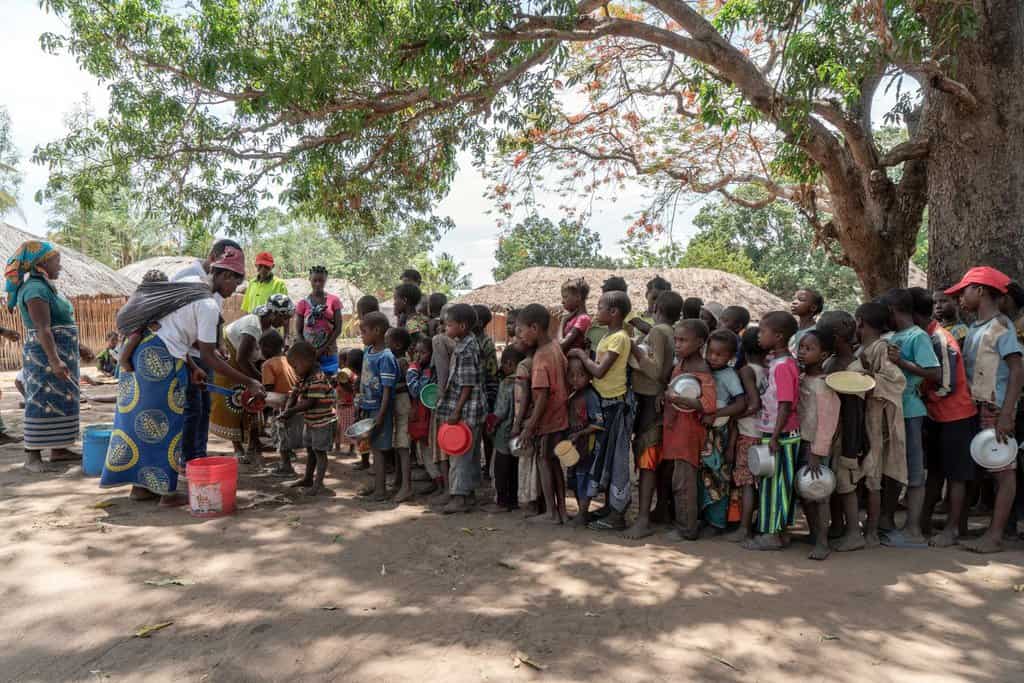 Displaced people gather in a camp in Mozambique’s Cabo Delgado province in this 2019 photo. Residents in northern Mozambique, a region rich in natural gas deposits, have been grappling with an Islamist insurgency since 2017. (CNS photo/Alessandro Grassani, courtesy AVSI)

On several occasions, the United Nations has warned that innocent civilians, especially women and children, bear the brunt of mass human rights violations that include brutal attacks and kidnapping. Father Silva said most children lost their parents during attacks, and some arrived at Metuge camp unaccompanied.

These children have witnessed horrible things in their homes before they fled to the camp, including the deaths of their parents, siblings, friends and neighbors,” said Father Silva, who also ministers at Metuge.

“People flee their homes with nothing, and when they arrive at a shelter, they need everything,” Zavagli told Catholic News Service. “First, they need an aid kit with essential items, then they need accommodation (temporary/tents) that can become permanent in the future. They also need psychological support and ultimately food.”

She told the story of Luiza Antomani, 45, who said gangs attacked her village beginning at 10 one night, stopping only around 4 a.m. When Antomani fled her village, she brought with her 20 people, among them many children and babies. She is currently living in Pemba.

In Nampula, Miguel said she appreciates the church for supporting her family, but she wants the government to end the attacks.

“We had lost everything but the church has really helped us,” she said. “It’s now the responsibility of the government to ensure we have peace in our region so that we can go back home.”

Featured image: Displaced Mozambicans gather in a camp in the country’s Cabo Delgado province in this 2019 photo. Residents in northern Mozambique, a region rich in natural gas deposits, have been grappling with an Islamist insurgency since 2017. (CNS photo/Alessandro Grassani, courtesy AVSI)