Police data shows attacks on Asians rose by 164% in large U.S. cities during the first quarter of 2021.

CHICAGO (CNS) – Interfaith leaders in Chicago May 2 rallied against racism and rising incidents of violence toward Asian Americans and Pacific Islanders, saying all people deserve fair and equal treatment.

The rally at the Buddhist Temple of Chicago in the city’s Uptown neighborhood drew about 75 people.

Rev. Patti Nakai, resident minister at the temple and a third-generation Japanese American, opened the event by remembering those killed in recent mass shootings, particularly members of the Asian American and Pacific Islander community.

Sixteen of America’s largest cities saw attacks on Asians rise by an unprecedented 164% during the first quarter of 2021, according to police data compiled by the Center for the Study of Hate and Extremism at California State University, San Bernardino.

“They were not killed by just a lone gunman out of the blue,” Rev. Nakai said. “They were made targets by something larger and that is our society, our culture, especially the media and entertainment industry, and by the twisted narration of American history.”

She encouraged participants to change the forces that make Asian Americans a target and seem like “others.”

“We do belong here. We’re not others. We’re not foreigners. We’re here as fellow Americans,” Rev. Nakai said. 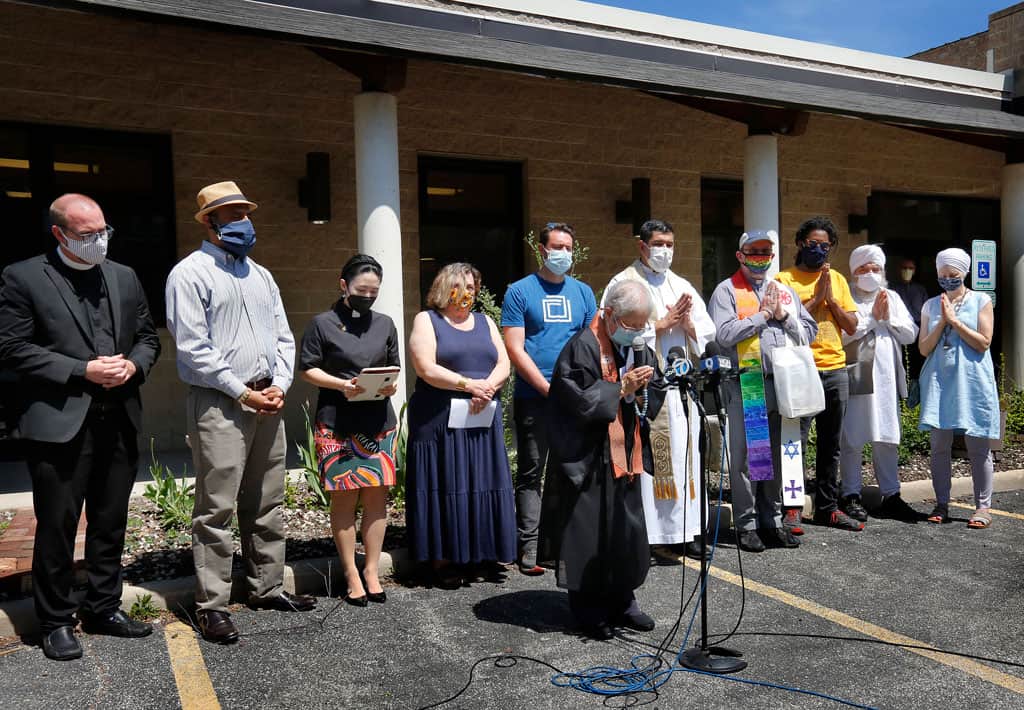 Rev. Patti Nakai of the Buddhist Temple of Chicago leads a prayer during an interfaith rally against racism toward Asian Americans and Pacific Islanders (AAPI) May 2, 2021. (CNS photo/Karen Callaway, Chicago Catholic)

The Uptown Clergy Group, an informal gathering of leaders from several religious traditions in the neighborhood, organized the rally, where each faith leader rang a bell outside the temple.

Loyda Vida, a Filipino from St. Mary of the Lake Church in Chicago, was at the rally.

“I am really concerned with what is going on because we are kind of timid and still we experience the harsh judgment that they are inflicting on us,” Vida said. “It is very nice to be here and be together because we are all one. We are all connected with each other.”

Her fellow parishioner Margaret Furlong attended the rally to show her support for Asian Americans.

“We’re trying to do something about racism,” Furlong said. “It’s the right thing to do. It’s what Jesus would do.”

Vida added that such work is appropriate because it falls in line with church teaching.

“We have a moral responsibility to act the way the Lord wants us to. That’s basic catechesis that we teach the children in grade school,” she said. “It’s a moral choice.”

Father Manuel Dorantes, St. Mary of the Lake pastor, joined the religious leaders at the rally.

“Many people are being hurt in our community,” he told the Chicago Catholic, newspaper of the Archdiocese of Chicago following the rally. “And when anyone hurts—when a single person hurts in the community—the entire community is hurt.”

He pointed to several recent incidents in the Uptown community where Asian Americans or Pacific Islanders were assaulted because of their skin color or heritage.

“That is unacceptable. As Catholics, we believe that every single human life has dignity regardless of who they are or where they come from,” Father Dorantes said. “I am here simply as a minister of the church to unite myself with the rest of the faith leaders of the community to tell people that everyone has dignity.” 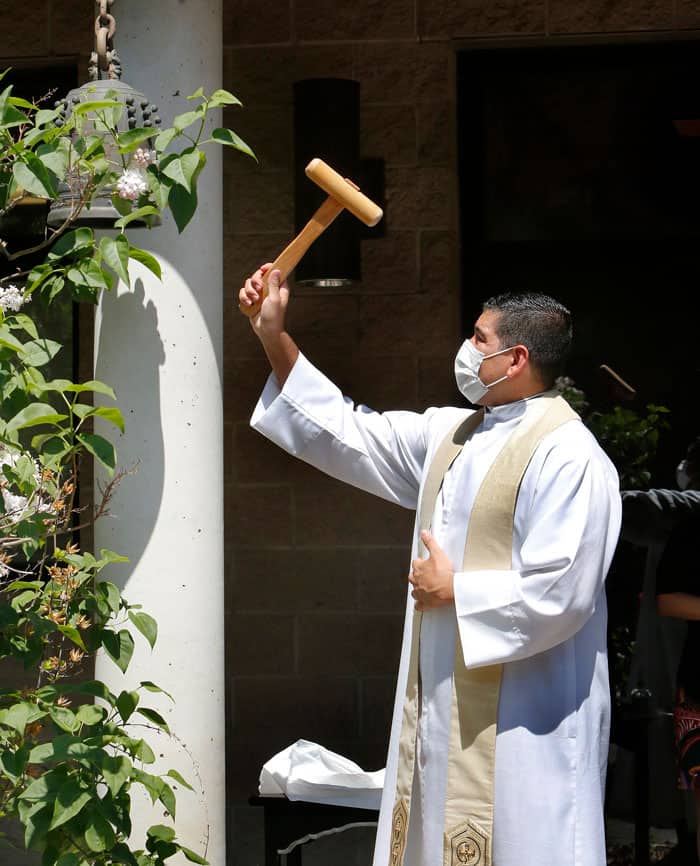 During an interfaith rally against racism toward Asian Americans and Pacific Islanders, Father Manuel Dorantes, pastor of St. Mary of the Lake in Chicago, rings a bell at the Buddhist Temple of Chicago. (CNS photo/Karen Callaway, Chicago Catholic)

The faith leaders hope to hold more events in the future to raise awareness of racism, Rev. Nakai said.

“To change the minds, that’s where it starts. This kind of gathering, just being together is a start,” Rev. Nakai said.

Chicago Cardinal Blase J. Cupich has also spoken against racism against Asian Americans. Following the killing of eight Asian women in Atlanta March 16, he said in a statement that there is no place in society for violence and hate speech. He called on all people to “resist language, culture and acts that denigrate Asian Americans and all people of color—because they have deadly consequences.

“We must be ever vigilant against words that inspire acts of hate—this responsibility is even greater for elected officials,” he added.

“When people make racist comments or jokes, it normalizes bigotry, reinforces racism and risks encouraging those who would commit hate crimes,” he said. “It is incumbent on all Christians, all Americans, to resist subtle and overt acts of bigotry, to build up the common good through acts of love for all our neighbors, near and far.”

Featured image: Parishioners of St. Mary of the Lake in Chicago listen to speakers at the Buddhist Temple of Chicago May 2, 2021, during an interfaith rally against racism toward Asian Americans and Pacific Islanders. (CNS photo/Karen Callaway, Chicago Catholic)