Poor countries cannot be expected to recover from the current financial crisis if the world returns to an economic model in which a small minority of people owns half of the world’s wealth, Pope Francis said.

In a message to participants at the World Bank Group and International Monetary Fund 2021 virtual spring meetings April 5-11, the pope said that despite “our deeply held convictions that all men and women are created equal, many of our brothers and sisters in the human family, especially those at the margins of society, are effectively excluded from the financial world.”

“If we are to come out of this situation as a better, more humane and solidary world, new and creative forms of social, political and economic participation must be devised, sensitive to the voice of the poor and committed to including them in the building of our common future,” he said.

Although countries are formulating their own recovery plans, the pope wrote, there is a need for a global plan to create new institutions to advance “the integral human development of all peoples.”

Using his message to repeat his call for debt forgiveness for poorer countries, the pope’s appeal coincided with the launch April 7 of a campaign by the Vatican’s COVID-19 commission calling for debt relief in Africa, where the situation of many countries has worsened because of the pandemic.

Poor nations, the pope said, not only must have “an effective share in decision-making and facilitating access to the international market” but also a significant reduction in their debt.

“Relieving the burden of debt of so many countries and communities today is a profoundly human gesture that can help people to develop, to have access to vaccines, health, education and jobs,” he said. 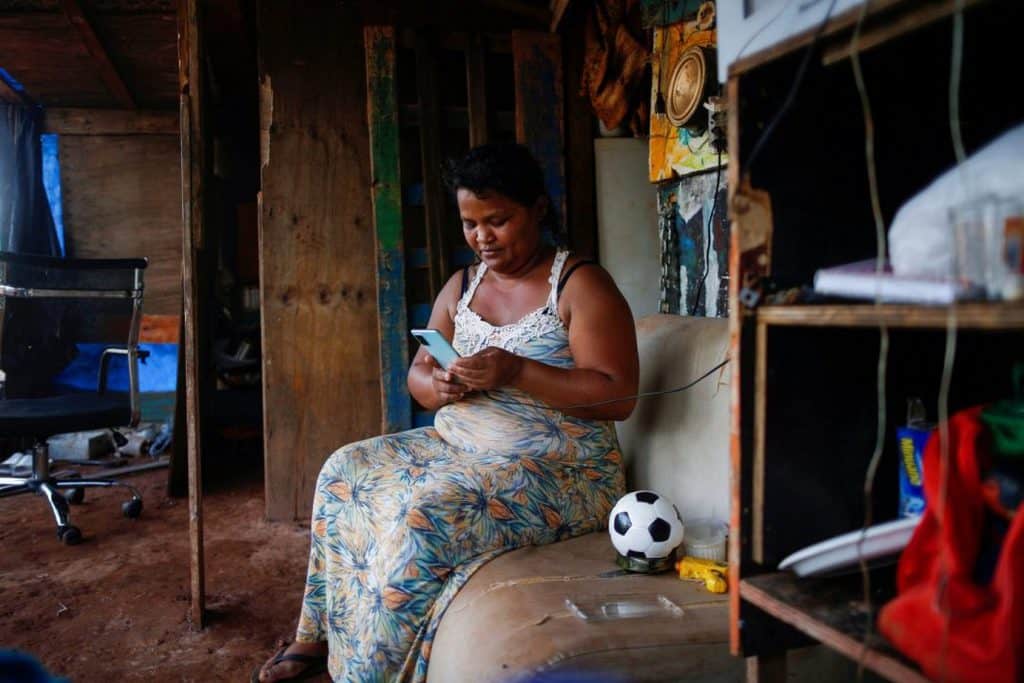 Tatiana Araujo de Sirqueira, 33, uses a cell phone in her home set up on land near Planalto Palace during the coronavirus pandemic in Brasília, Brazil, March 3, 2021. In a message to participants of the World Bank Group and International Monetary Fund 2021 virtual spring meetings, Pope Francis said poor countries cannot be expected to recover from the current financial crisis if the world returns to an economic model in which a small minority of people owns half of the world’s wealth. (CNS photo/Adriano Machado, Reuters)

The pope also highlighted the “ecological debt” that exists in the world caused by “human-induced ecological degradation and biodiversity loss” that have affected poor countries.

Developed countries, he said, can pay this debt by “significantly limiting their consumption of nonrenewable energy or by assisting poorer countries to enact policies and programs of sustainable development, but also by covering the costs of the innovation required for that purpose.”

Pope Francis also said financial markets must be regulated and geared toward serving the common good during the current health crisis.

Calling for “a justly financed vaccine solidarity,” the pope said governments cannot allow “the law of the marketplace to take precedence over the law of love and the health of all.”

“It is my hope that in these days, your formal deliberations and your personal encounters will bear much fruit for the discernment of wise solutions for a more inclusive and sustainable future, a future where finance is at the service of the common good, where the vulnerable and the marginalized are placed at the center, and where the earth, our common home, is well cared for,” the pope told delegates from around the world.

Featured image: Children are pictured in a file photo in a poor section of Luanda, Angola. Catholic bishops in Angola said the COVID-19 pandemic is exacerbating an already grave imbalance in living conditions and opportunities, alongside an “unbridled race to exploit hydrocarbons” in its parks and nature reserves. (CNS photo/Alessandro Bianchi, Reuters)