Nuncio Tells Beleaguered Mexican Town of Aguililla: The Church Is with You
By Catholic News Service
Apr 27, 2021
News
ShareTweet it!LinkedinEmailPrint

Visiting the Mexican town of Aguililla, papal ambassador repeats the Church’s concern for those suffering from violence.

The ambassador, or nuncio, also wanted to raise awareness of the situation in Aguililla, a town in western Michoacán state, where drug cartels have battled each other and blocked highways, leaving residents unable to travel freely and causing shortages of everything from food to fuel.

“We in the Church cannot get involved in war, but we can tend to the wounded, to the people. My visit is to make people feel the Church is close, that they’re not alone and will not be abandoned,” the nuncio said in Aguililla, where he led a procession and celebrated Mass April 23 for the people. “The Church must be at the side of the people, not fleeing.”

The nuncio’s visit to Aguililla offered a brief respite from the violence gripping the region, which is being disputed by rival criminal organizations: United Cartels and the Jalisco New Generation Cartel.

The situation became so severe in Aguililla that eight bodies were found decapitated earlier in April and one cartel used a drone to drop explosives on the police. The nuncio said he shared news of the beheadings on social media and had his account temporarily suspended. 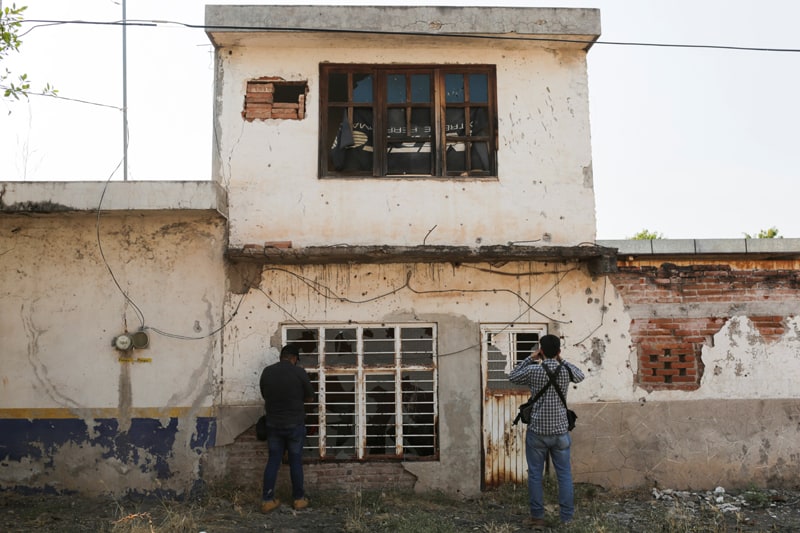 Photographers take pictures of the bullet-riddled front of an abandoned house near Aguililla, Mexico, April 23, 2021. Drug cartels have battled each other and blocked highways in the town, leaving residents unable to travel freely and causing shortages of everything from food to fuel. (CNS photo/Alan Ortega, Reuters)

The visit also cast attention on the shocking violence of Mexico’s seemingly intractable problems with organized crime and the government’s preference to downplay what’s occurring.

Archbishop Coppola said functionaries in the Foreign Relations Secretariat asked, “Please don’t speak so much about violence in Mexico; it damages tourism.”

A spokesman for the Foreign Relations Secretariat said the request would have occurred in the administration of former President Enrique Peña Nieto, who left office Nov. 30, 2018.

Current President Andrés Manuel López Obrador, the nuncio said, has sent letters to the pope asking for assistance with “the struggle against crime and violence in Mexico. … He’s asked me on various occasions for this, and the Church is responding.”

The visit also highlighted the absence of the government in many conflictive corners of the country, which creates space for criminal groups to operate.

“It’s very important that what’s happening here is known. The bad guys take advantage of silence,” Archbishop Coppola continued. “In Italy, we know the mafia flourishes where the state isn’t (present). That’s where private interests try to take over.” 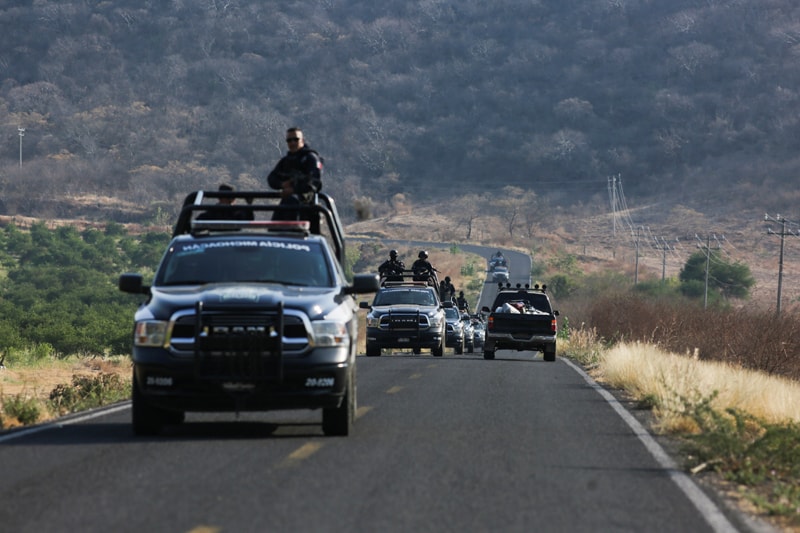 A state police convoy patrols a road near Aguililla, Mexico, April 23, 2021, after a visit from Archbishop Franco Coppola, the apostolic nuncio to Mexico. Drug cartels have battled each other and blocked highways in the town, leaving residents unable to travel freely and causing shortages of everything from food to fuel. (CNS photo/Alan Ortega, Reuters)

The nuncio traveled to Aguililla with Bishop Cristóbal Ascencio García of Apatzingán, taking a highway through communities hit hard by violence. Townspeople lined the route to see the churchmen travel through in a white pickup with Vatican flags and to receive blessings.

Mexican media reported state police operated five checkpoints on the highway, which had been either blocked or ripped up by criminal groups. The road closed again after the nuncio’s visit.

The situation has become so dire in Aguililla that Mexican media report more than 1,500 people have fled the region.

Father Andrés Larios, a priest in the Diocese of Apatzingán, said that on the same day as the nuncio’s visit, priests in Aguililla were asked to sign 20 letters for people wanting to request asylum in the United States.

Featured image: Archbishop Franco Coppola, the apostolic nuncio to Mexico, gives a rosary to a child during a visit to Aguililla April 23, 2021. Drug cartels have battled each other and blocked highways in the besieged town, leaving residents unable to travel freely and causing shortages of everything from food to fuel. (CNS photo/Alan Ortega, Reuters)