The inherent value of the elderly needs to be recognized, protected, cherished and advanced, archbishop says.

UNITED NATIONS (CNS) – Universally recognized human rights are “undermined and rejected” whenever people “are no longer seen as a paramount value to be cared for and respected,” Archbishop Gabriele Caccia told a U.N. working group on aging March 29.

Too often the elderly, along with the poor, the disabled and the unborn, are “thrown aside” and determined to be “no longer needed,” said the Vatican’s permanent observer to the United Nations.

“We need … an approach in which the inherent value of the elderly is recognized, protected, cherished and advanced. The Holy See strongly believes that ‘those who make room for the elderly make room for life!'” he said, quoting Pope Francis’ encyclical “Fratelli Tutti, on Fraternity and Social Friendship.“

In the labor market and the world of work, Archbishop Caccia said, many elderly people continue to face age discrimination “that undermines the dignity both of their work and of them as workers.”

This discrimination can be seen “in all aspects of work, including application and hiring processes, the work experience itself and opportunities after retirement,” he said. “The elderly worker has wisdom, experience and skills that should not be cast aside.”

At the same time, efforts to address these employment challenges of the older generations “should not be framed as creating competition with other age groups,” he explained.

Too much emphasis on their “continued workforce participation” should not suggest “retirement is a failure or that one’s value depends on productivity,” he explained.

And “focusing only on paid work risks trivializing the irreplaceable unpaid work in the family so often done by elderly,” he continued. “Such concrete contributions to the family—as well as to society through elderly volunteers—deserve much greater recognition.”

He noted that many countries currently “offer very concrete and practical ways for the elderly to engage in society, including through cultural, social and leisure programs, where possible,” and he urged that these measures be expanded.

Archbishop Caccia also urged countries to address obstacles many elderly men and women also often face in accessing court buildings, getting legal aid and being able to use resources in “an increasingly digital legal environment, something the pandemic has highlighted.”

He said the digital divide and disparities in education many people already experience should not increase for them as they age. 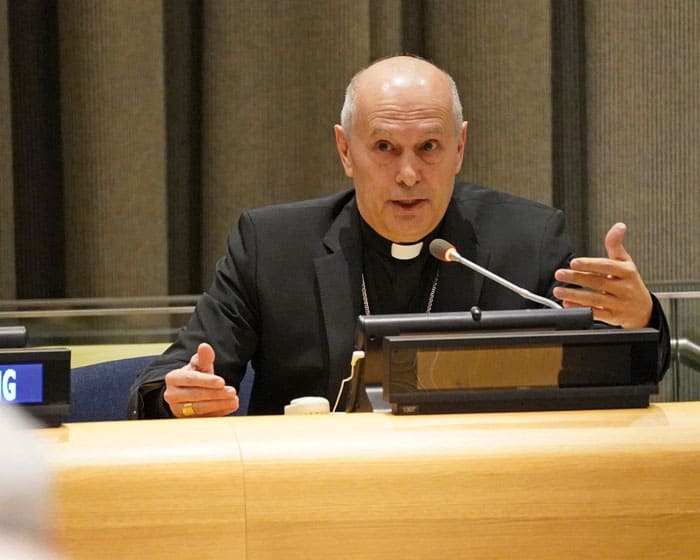 The archbishop urged that government leaders ensure the elderly also have access “to social protection and care programs, to health care, to the right to give informed consent and to guardianship arrangements.”

“Effective measures to prevent and address violence, abuse, discrimination and neglect,” he said, also “must be in place.”

During the COVID-19 pandemic, the elderly has comprised “the largest portion of lives lost,” he said.

“A significant number of COVID-19 deaths occurred in institutions for the elderly” in the first wave, he said.

These institutions, he added, should have protected what he called the “most fragile part of society,” yet instead “death struck disproportionately.”

Archbishop Caccia urged the world body to give more consideration to “the dangers of an uncritical and inordinate institutionalization of the elderly” and look at how to guarantee “the best possible continuum of care, preserving, as far as possible, the bonds of older persons with loved ones and with a familiar environment.”

Often the elderly, especially the most vulnerable and those most alone, are relegated to institutions that are unable to adequately care for all their needs but are proposed “as the only possible solution to look after them,” he said.

This approach “exposes many elderly persons to neglect, abuse, violence and, in the case of the pandemic, to increased risk of violations of the rights to life and health,” the archbishop added.