Mass was during a national strike over kidnapping of five Catholic priests, two nuns and three laypeople and growing anarchy in Haiti.

MIAMI (CNS) — A “Mass for the freedom of Haiti,” led by Haitian bishops, turned violent at the end when police fired tear gas into the church.

The Miami Herald reported the April 15 Mass in Pétion-Ville, a suburb of Port-au-Prince, included the nation’s 11 bishops and a packed crowd that overflowed into the streets.

The Mass was part of a national strike in response to recent kidnappings of five Catholic priests, two nuns and three laypeople in Haiti and growing anarchy in the Caribbean nation. The Church and other entities had called for the strike.

“What is happening here is unacceptable,” André Michel, a leading opposition leader who was among those in the church, told the Miami Herald. “When the Mass ended, the police fired tear gas. I almost died from asphyxiation inside.”

The newspaper reported some members of the congregation passed out in the pews while others made it out of the church.

“The violence has reached a high—we see that this is the deepest point ever reached in this country and we cannot go deeper,” Fiammetta Cappellini, Haiti-based country representative for the Milan-based AVSI, told Catholic News Service by phone April 14. AVSI is a nonprofit organization created in 1972 and guided by Catholic social teaching.

AVSI, Cappellini said, is not joining the national strike due to its ongoing humanitarian work, but she said the agency supports the spirit of the strike and hopes it brings attention and assistance to Haiti’s difficulties, which she said have been in steep decline since 2018.

Ironically, the global COVID-19 pandemic has not directly impacted Haiti’s populations as feared, but a secondary fallout—unemployment—has further strained the local economies at the worst possible time. Unemployment is rampant, particularly among the young, she said. 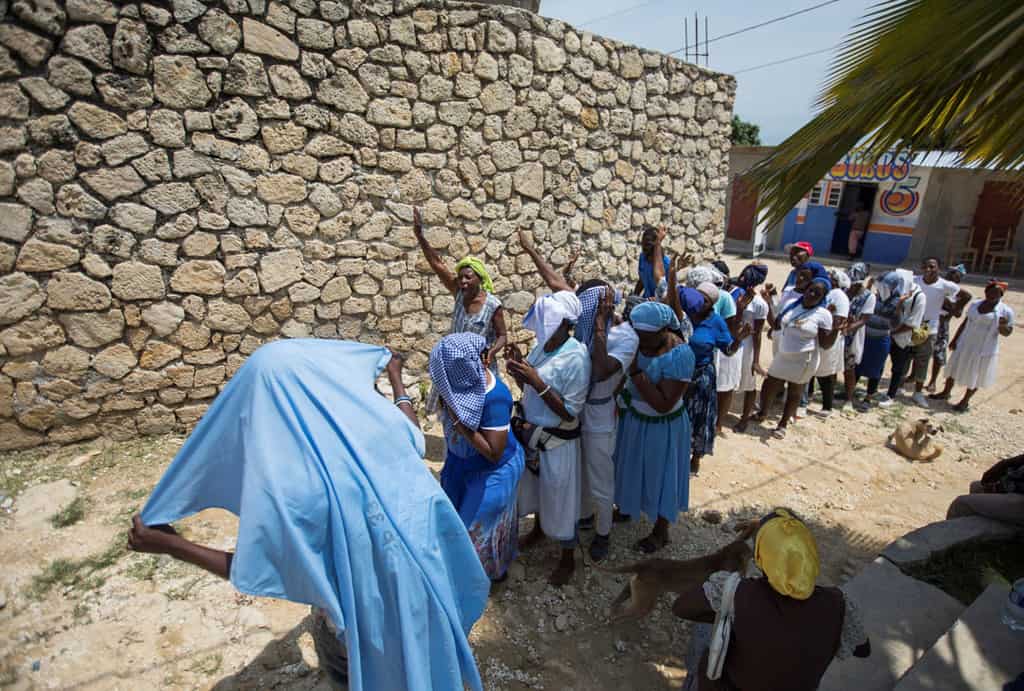 People pray near the Church of St. Roch in Port-au-Prince, Haiti, April 12, 2021. A French priest, two nuns and three laypeople who were abducted together on their way to the parish April 11. (CNS photo/Valerie Baeriswyl, Reuters)

“We looked at Somalia, Venezuela and we could not have imagined seeing Haiti going down this same road (of instability),” Cappellini said. “The country needs all the international support we can have. Haiti doesn’t have the resources to face this situation alone at this point.”

Fides, the news agency of the Congregation for the Evangelization of Peoples, reported that the Church in Haiti asked Catholic schools, religious schools, universities and other Catholic institutions to observe an interruption of activities April 15.

The Haitian bishops’ conference asked that church bells ring at noon across Haiti and that Masses are offered for change for the better in the country following the recent kidnapping of the Catholic priests, nuns and laypeople.

The victims were abducted on their way to a parish near the capital of Port-au-Prince early April 11. Father Ludger Mazile, secretary of the Haitian bishops’ conference, told Agence France Presse April 12 that the kidnappers had demanded a ransom of $1 million for the group’s release.

The silence, the prayer, the interruption of activities during the strike is intended to shake up the national conscience and urge the authorities to consider and address urgently the issue of kidnappings, Fides reported.

Cappellini told CNS that AVSI currently has 15 international staff and 300 local staff working in both rural, urban and slum programs across the country, and that there is heightened concern about the dangers to agency staff, many of whom are linked to ongoing humanitarian projects in poor sections of Port-au-Prince.

“We have ongoing activities that ask us to be there every day; the people are counting on us,” Cappellini said. “The dangers are due to the gangsters—large number of gangs in the slums are facing off against each other with no concerns about women and children.”

“We are concerned about being in the crossfire,” she said. 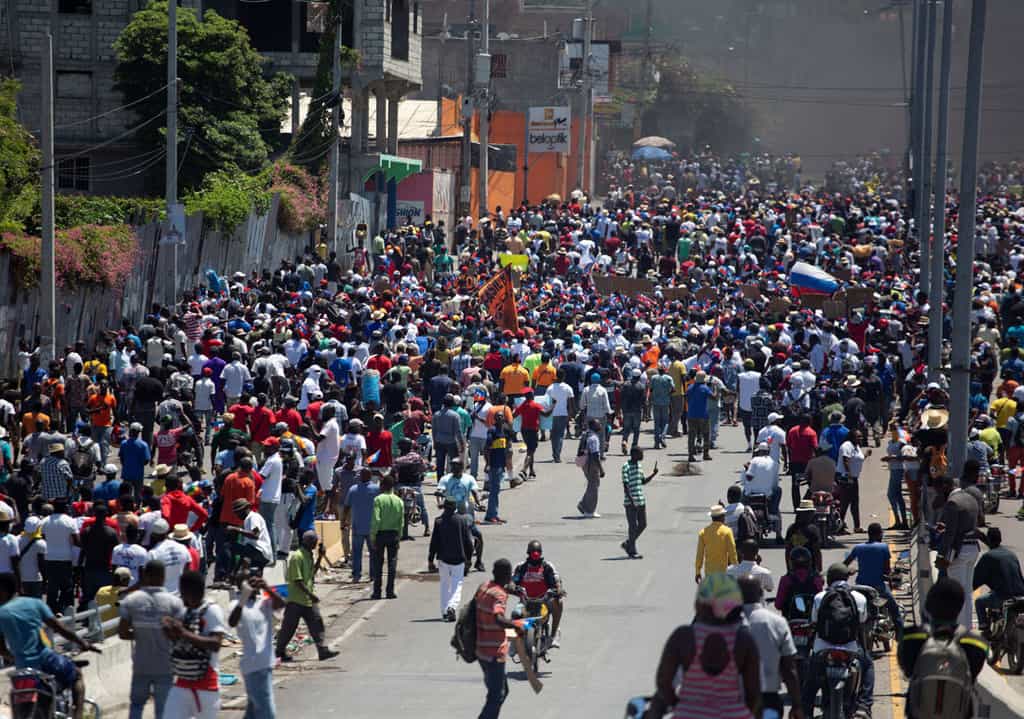 Demonstrators march during a protest against the government of Haitian President Jovenel Moïse in Port-au-Prince March 28, 2021. (CNS photo/Estailove ST-Val, Reuters)

Frequent political protests in Port-au-Prince, other regional cities and the rural areas have often shut down transportation, closed businesses and hospitals and forced children to stay home from school, paralyzing the Caribbean nation of 11 million.

Haitian Prime Minister Joseph Jouthe resigned April 14 in the wake of crime and social unrest after only one year on the job and before a controversial constitutional referendum, as well as frustration with President Jovenel Moïse’s management of the crisis.

In addition to the recent clergy kidnappings, bandits in mid-April attacked a Port-au-Prince orphanage, assaulting children and killing a guard.

In recent years, protesters, including Catholic leaders, have been calling for an end to corruption and mismanagement and for the removal of Moïse.

The ongoing crisis is a response to political and economic dysfunction, but criminal mobs are taking advantage of the situation, Cappellini said.

“We are working closely with the Church, because the Church in Haiti has deep and strong relationships with the people and a capacity to reach every community in the country,” she said. “Through them we are able to have our activities arriving to all these communities.”

“We are seeing the Church having a voice in the crisis in Haiti, and we hope it will be heard by the government, although we are not sure they are listening.”

Capellini added that the international airport in the Haitian capital remains open but that the land border with the Dominican Republic is mostly closed and unsafe.

The U.S. State Department is advising against travel to Haiti.