Lifelines for the “Least of These” in Nepal
By Gregg Brekke
Mar 4, 2021
News
ShareTweet it!LinkedinEmailPrint

A Maryknoll priest devotes his life to those shunned by Nepali society.

The Nepali landscape makes a dramatic shift as our plane lands in the southwestern town of Nepalgunj in late February 2020. Gone are the spires of the Himalayas and the ravines of the glacial cut below the world’s tallest mountain range. They are replaced by an expanse of farming plains of the Bardiya District and the forests of the Bardiya National Park to the north.

Maryknoll Father Joseph Thaler and two staff members–Ms. Shailee Singh Rathour, project director, and Mr. Gopal Krishna Prajapati, program finance director–have come here to meet the people engaged in programs supported by the Maryknoll Society through a local non-governmental organization called the Dalit Welfare Organization. The three visitors will speak with those administering the programs, meet with the present group of students and catch up with graduates of Maryknoll-sponsored scholarship and vocational programs.

It’s a homecoming of sorts for Father Thaler and his staff. Rathour is from nearby Gulariya, where her husband is a local politician, and Father Joe, as he is often called, has been visiting the area for over a decade.

The missioner from Covington, Ky., has served alongside the people of Nepal since October 1977. Not counting 10 years at the Maryknoll Center in New York, the majority of his 43 years as a Maryknoll priest have been spent building relationships with those considered “the least of these” in Nepal and partnering with organizations dedicated to helping them. 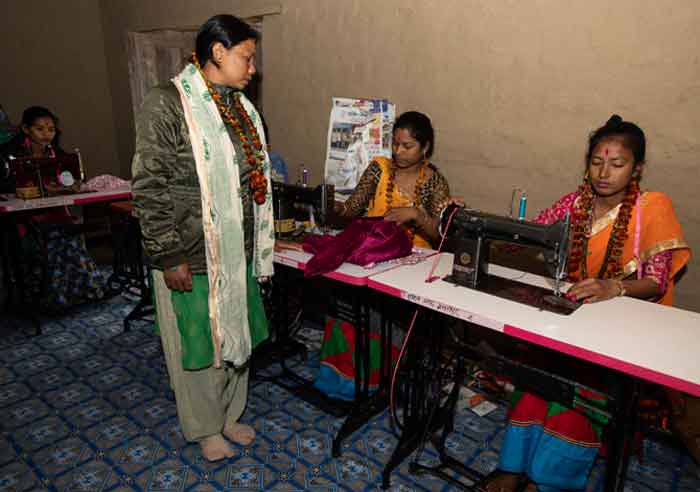 Like the other members of the initial group of Maryknoll missioners in Nepal, Father Thaler was aware that people with disabilities were culturally shunned and outcast here. One incident particularly moved him.

“We were walking down the main street here and there was a woman who was selling cigarettes, one at a time,” he says. “She had a sack next to her, and every once in a while that sack would shake. We asked her what was in the sack. She told us it was her daughter.” The child was being hidden because she was disabled.

The Maryknoll missioners began to focus not only on helping to remove stigmas associated with disabilities, but also to empower people to live full and productive lives.

In Bardiya District a number of programs are doing just that. Widows and women from poor families, along with an entire residential school in Gulariya dedicated to serving young people with disabilities, receive comprehensive tailoring training at one of several cutting and sewing programs throughout the region. Over five days, Father Thaler and his staff will visit nearly a dozen sites that receive funding from the Maryknoll Fathers and Brothers. 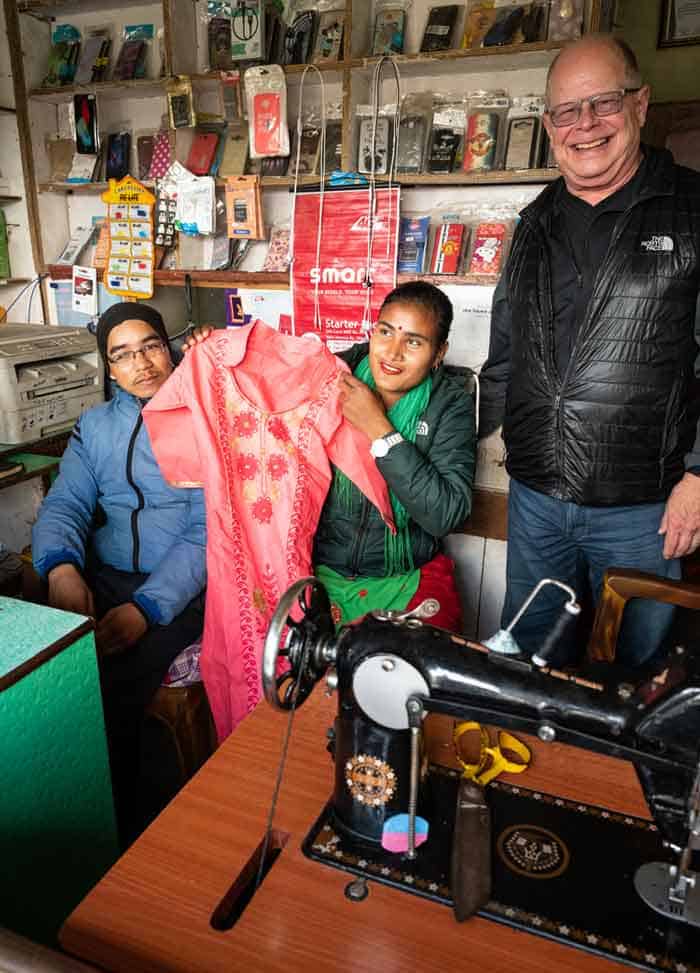 Father Joseph Thaler (right) visits Dambarkala Thapa, a graduate of the Sewing Cutting Training for Differently Abled Persons, and her husband Tej Bahadur Ran at their shop in Banke District, Nepal. The couple, both with physical disabilities, received training and support from the Maryknoll Fathers and Brothers, she in tailoring and he in mobile phone and small electronics repair. (Gregg Brekke/Nepal)

Dambarkala Thapa and Tej Bahadur Ran are a couple who met at one of the training programs for disabled people. From their small storefront they operate a convenience store. Dambarkala makes and alters clothing, and Tej repairs and maintains a wide range of electronics–from cell phones to power regulators. Most meaningful to Father Thaler is that these people who have physical challenges have become important members of their community and lead fulfilling lives.

Gyanu Kumari Chaudhary is the instructor at the Sewing Cutting Training Program for Deprived Women in Baniyabhar. Her center is newly constructed and 15 women are seated at their foot-operated sewing machines learning to make both functional and ceremonial clothing. Many of these women are widows, their husbands killed in industrial or farming accidents while working abroad. Graduates of the training program receive their own sewing machines upon completion of state-mandated requirements and all acknowledge the training program is an essential element in supporting themselves and their children.

“This is an opportunity for these women to become independent,” says Chaudhary. “Widows are not often treated well by their in-laws or are expected to contribute to the family income once their husband is no longer able to do so. Making clothing gives them pride and keeps them from poverty or begging.” 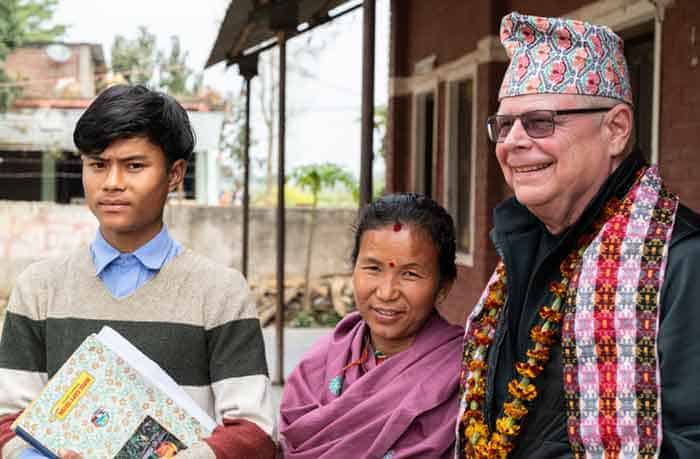 Father Joseph Thaler with a scholarship recipient and his mother during a presentation for visitors from the Maryknoll Fathers and Brothers of Nepal at the secondary school in Tratal, Bardiya District, Nepal. (Gregg Brekke/Nepal)

Student Dropati Pharu says she is unsure what she would be doing were it not for the sewing cutting training program. “I didn’t have an opportunity to learn another skill growing up, and there is not enough work for those hoping to help with farming,” she says. “I plan to start my own business and become independent. … That couldn’t happen without the generosity of this program.”

Staff and students at the Shukra Secondary School in Taratal greet Father Thaler and his staff at an assembly. They thank Maryknoll for its commitment to their vocational training, especially in automotive repair, where vehicle and engine lifts, a computer center and other needed equipment have been donated for these students from poor families to complete their education.

Before the team departs for Kathmandu, there’s a visit to the residential school in Gulariya. More than 20 young people are here for a year of training in sewing and cutting. A few have cerebral palsy, others are hearing or speech impaired, a few have mild forms of autism. In Nepal, challenges like these prevent students from attending state-run schools. This Maryknoll-funded program is a lifeline for them, giving them skills that will enable them to enter the workforce by starting their own tailoring businesses. 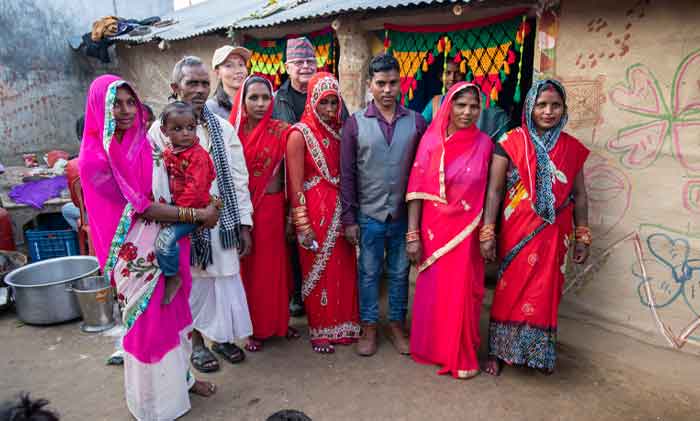 It’s a special day for these students. The school’s financial administrator has gotten married and students are dressed in their finest clothing for the party to celebrate the bride’s reception into the groom’s home and family.

Father Thaler and his staff are invited too as special guests of the groom, who has received training and employment through a Maryknoll-funded project. Soon, large pots of food are distributed and it isn’t long until the music begins in earnest.

First, the young women from the school reach the dance floor. They are soon joined by their male counterparts. Then the students coax others onto the floor. Father Thaler joins them. His convincing movements prove he’s done this before. He is, after all, a missioner among the people. And he’s celebrating with those to whom he’s dedicated his life.