At least two people died and several were injured following a political rally.

CHALATENANGO, El Salvador (CNS) – Cardinal Gregorio Rosa Chávez has asked the country to pray “for liberation from Satan” after violence erupted following a political rally in the capital, San Salvador.

At least two people died and several were injured late Sunday, Jan. 31; some called the incident the “most serious act of political violence” in almost three decades since peace accords ended the country’s civil war.

“The devil is running loose in El Salvador, there are many demons on the loose,” Cardinal Rosa Chavez said on Feb. 1 at the end of his homily at St. Francis Church in San Salvador. He compared the Gospel of the day, about a man possessed by demons, to the deadly incident that took place the previous night.

Though accounts differ, reports by El Salvador’s major newspapers say members of the left-wing Farabundo Martí National Liberation Front, one of the two major political parties in El Salvador, were being transported in a truck displaying the party’s colors and other insignia. They were heading back to the party’s headquarters after a rally. Victims said a vehicle nearby began harassing the truck and followed it through traffic. At some point, the vehicle is said to have blocked the truck’s path; a man got out of the car and began shooting at the people in the truck, which also was transporting children.

El Salvador is set to vote Feb. 28 for municipal and general assembly elections amid one of the most contentious campaign seasons in recent history. Third party Nuevas Ideas (New Ideas), a relatively new conservative political party, is aiming to gain control of the general assembly, equivalent to Congress in the U.S. Many have blamed its leader, President Nayib Bukele, with contributing to an atmosphere of political discord that led to the shooting.

Salvadoran authorities said Feb. 1 they captured three people who may have been involved in the shooting. Bukele at first seemed to insinuate on Twitter that the FMLN had orchestrated the attack on its members. But a few hours later, the Salvadoran attorney general said those under custody were part of a security team for the minister of health, who belongs to Bukele’s party.

“This is serious, the electoral contest cannot become a bloodbath,” tweeted Salvadoran Attorney General Raúl Melara, who called a meeting with officials from various political parties to appeal for peace. One of the major national newspapers, El Diario de Hoy, reported that representatives from Nuevas Ideas did not attend.

The incident harkened back to El Salvador’s bloody political past, when one party ruled and silenced the rest with violence. Photos of the scene of the crime showed blood in the bed of the truck and shoes left behind as the victims tried to escape.

Cardinal Rosa Chavez, in his appeal for peace, referenced the Gospel reading of the day about the healing of the Gerasene demoniac and how Jesus healed him, casting out the demons, sending the unclean spirits into thousands of swine who later drowned. 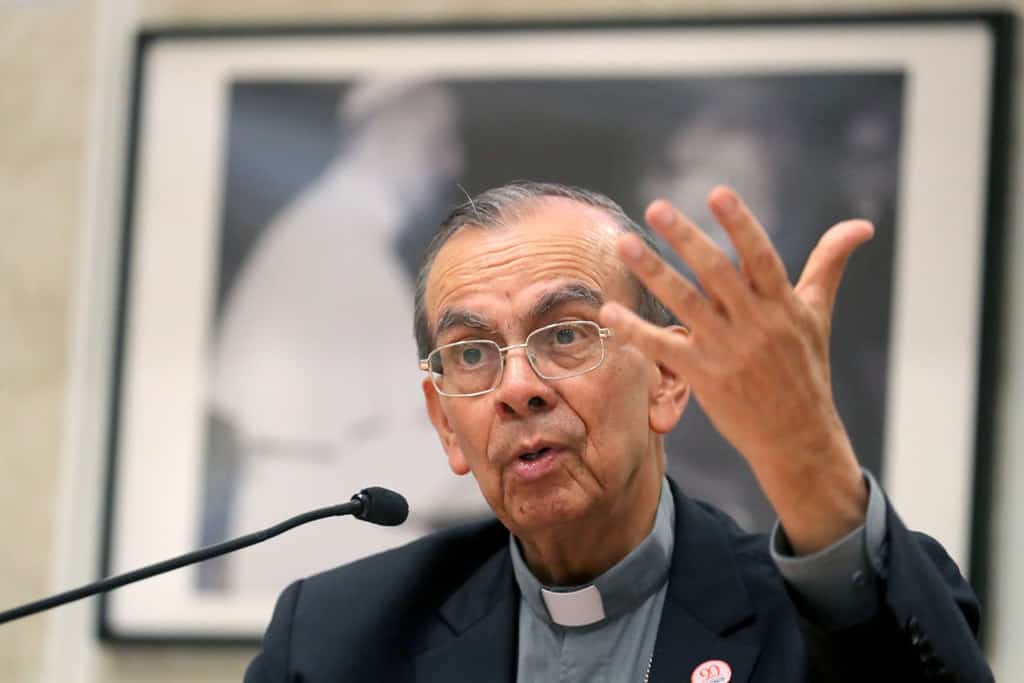 Cardinal Gregorio Rosa Chavez of San Salvador, El Salvador, is pictured in an Oct. 12, 2018, photo. “The devil is running loose in El Salvador,” Cardinal Rosa Chavez said during a homily Feb. 1, 2021. The previous day, two people were killed and others injured during an armed attack at a political rally in San Salvador. (CNS photo/Alessandro Bianchi, Reuters)
“Let’s entrust to the Lord, this morning, this country that is, that has so many demons,” Cardinal Rosa Chavez said. “This is how the political campaign begins … Why can’t points of view be presented with simplicity, respect, tolerance? Why do they resort to violence, verbal, offenses, insults, threats? May God help us so we can have a civilized campaign, as it should be.”

The violence was widely condemned by groups inside and outside the country, including Luis Almagro, secretary-general of the Organization of American States. Brendan O’Brien, chargé d’affaires of the U.S. Embassy in San Salvador, expressed condolences to the family of those killed. He also said via Twitter that “any violence is unacceptable” and called for justice.

In the United States, Samantha Pineda, program director at the Committee in Solidarity with the People of El Salvador, expressed concern about the political upheaval.

“It is heartbreaking and terrifying to see a return to this type of overt political violence in El Salvador, which had largely ended after the Peace Accords were signed in 1992, but it’s not necessarily a surprise,” Pineda said in a statement Feb. 1. “Social movements and international solidarity organizations have been warning that behind the president’s (Bukele) discourse of hate is a Machiavellian strategy to legitimize violent state repression and the consolidation of power.”

She said comments made by president Bukele last month, calling the accords a “farce,” revealed his intentions “to destroy many of the most important achievements of the accords, like democratic elections, political freedoms and limits on the role of the military in society.”

The killings were part of a violent weekend in the country. On Jan. 31, the nonprofit Doctors Without Borders announced it was suspending temporarily its operations in El Salvador after an armed attack on one its ambulances by a gang. Some personnel were injured.

The U.S. Embassy’s O’Brien condemned the “senseless attack” and said members of aid organizations, national and international, should be respected and safeguarded.

Doctors Without Borders said that while activities were suspended, they were not entirely canceled “until we can investigate this, and it’s clear we can carry out our interventions safely.”

Featured image: An activist is pictured in front of the Monument to Memory and Truth at Cuscatlan Park in San Salvador, El Salvador, Jan. 16, 2021, during a protest to commemorate the 29th anniversary of the signing of the peace accords that ended El Salvador’s civil war. (CNS photo/Jose Cabezas, Reuters)