As many as 14.1 million American households are at risk of eviction, survey shows.

CLEVELAND (CNS) — The novel coronavirus threw Maria Arreola for a loop in June, sending her to the hospital for four weeks in a battle with COVID-19. For a while, she was sick enough to be placed on a ventilator.

Arreola, 43, who arrived from Mexico 19 years ago and is living in the U.S. illegally, recovered enough to return to her Phoenix apartment. But other challenges quickly surfaced.

In the hospital, she was diagnosed with breast cancer. Doctors are monitoring the disease and she expects to undergo surgery in several weeks.

She lost her job July 22, a week after returning home. Arreola said managers at Prada, the luxury women’s clothing store where she worked for five years as a cleaner, told her she missed too many days because of her illness. A month later, she and two her sons were evicted after not paying rent while she was sick and off the job.

Now the trio lives with Arreola’s sister, crowding into a two-bedroom apartment. Income for the joined household of six is limited. One of Arreola’s sons recycles scrap metal to make a few dollars. The sisters work irregular hours cleaning homes and apartments. The pay: $70 each per house. Finding better paying work has been difficult, Arreola said through an interpreter.

The household is able to scrape together enough money to pay about half the $800 in monthly rent, Arreola said, and eviction is not looming. But the landlord has been slow in fixing a blocked toilet and keeping the heat working properly.

Arreola has received some help from Voices United for Life, a pro-life organization. And in December, she joined online house meetings organized by the Valley Interfaith Project, a onetime Catholic Campaign for Human Development-funded organization that now advocates for people facing eviction during the pandemic.

Arreola is among thousands of people nationwide who have turned to parishes, Catholic Charities agencies and Catholic-affiliated nonprofits for assistance to stave off eviction. The number of people seeking financial assistance and emotional support is staggering, Catholic officials nationwide told Catholic News Service. 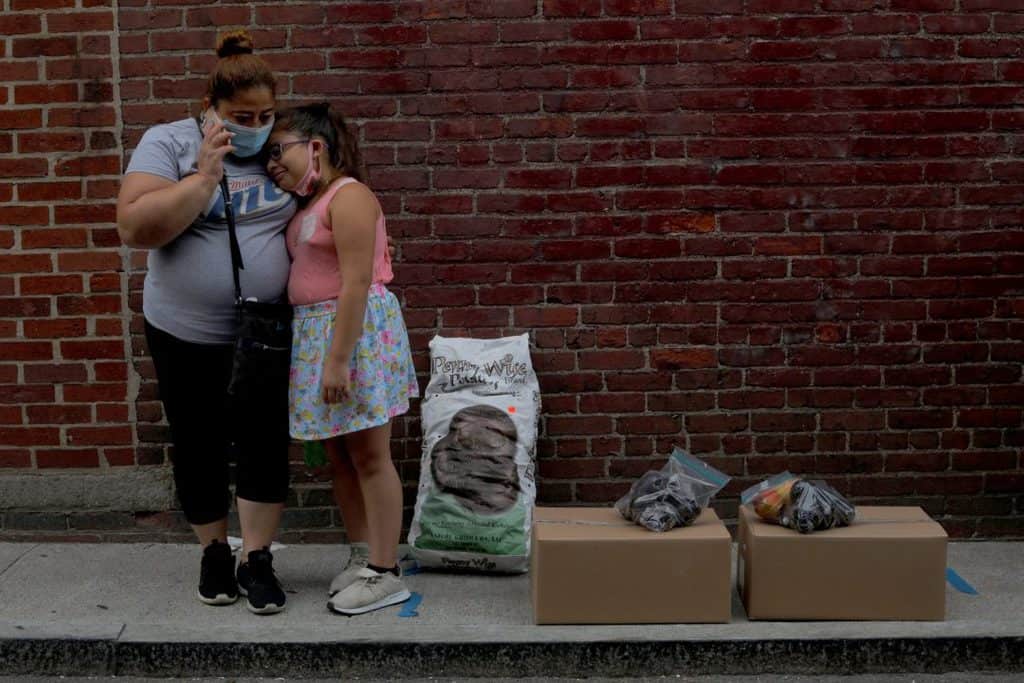 Sandra Cruz of Chelsea, Mass., waits for a ride with her daughter after picking up free groceries from a food pantry July 22, 2020. Cruz lost her job because of the coronavirus pandemic, fell four months behind on her rent and was fearing eviction. (CNS photo/Brian Snyder, Reuters)

“It’s been ridiculous in terms of the number of people who have been coming to us,” said Philomena Pereira, chief executive officer of Catholic Charities of the Diocese of Venice, Florida.

Service workers in tourism and migrant farmworkers are the most vulnerable, Pereira said.

Anne Scheuermann, director of the St. Mary Magdalene Parish Ministry Center in Pittsburgh, said more families have sought assistance with food and utility payments so they don’t fall too far behind in rent payments. Such requests were far less common before the pandemic, she said.

Statistics compiled by financial services firms give credence to those concerns.

A survey conducted Nov. 11-23 by Stout, a financial services advisory firm, estimated rent debt by the start of 2021 would reach $13.2 billion to $24.4 billion and that 6.9 million to 14.1 million households were at risk of eviction.

Moody’s Analytics painted a more dire picture, estimating in December that rent debt was as high as $70 billion by the end of 2020 with 12.8 million Americans owing an average of $5,400 in missed payments, late fees and unpaid utility bills. 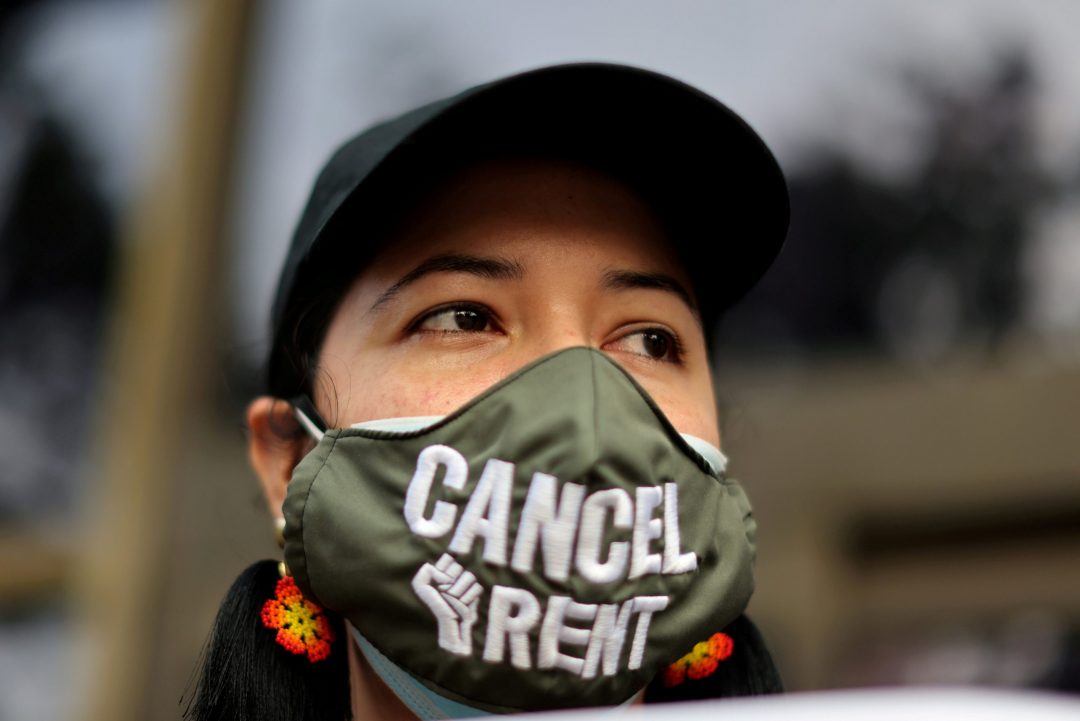 A demonstrator calling for an end to evictions is seen in Los Angeles Aug. 21, 2020, amid the coronavirus pandemic. (CNS photo/Lucy Nicholson, Reuters)

To help meet the growing need, Catholic Charities USA in December introduced the Francis Fund for Eviction Prevention. It was established with $1 million from the Felician Sisters of North America and matched by CCUSA.

“That is a huge worry for all of us because we have a limit of what we can do to help,” Sister Markham told CNS. “Catholic Charities and other charities can’t be the solution to this problem, but we can do what we can to help.”

Much of the effort has focused on convincing Houston and Harris County officials to quickly distribute tens of millions of dollars for rental assistance that was allocated under the $2.2 trillion CARES Act, said Elizabeth Valdez, lead organizer with The Metropolitan Organization.

Despite the availability of rental assistance, families whose members are in the country illegally are ineligible to receive any aid. 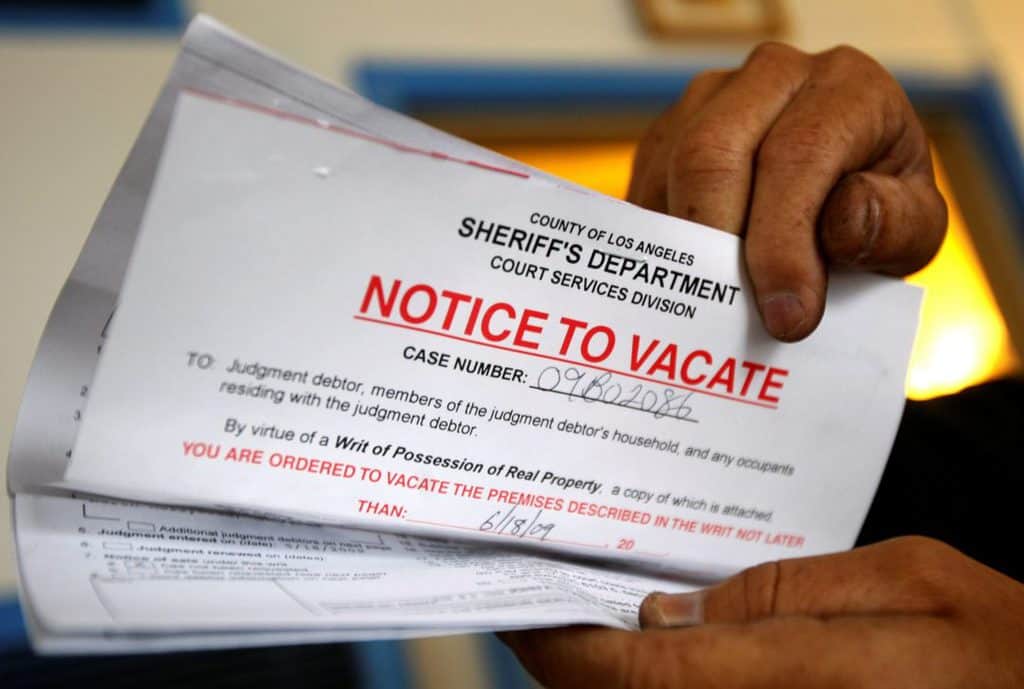 An eviction notice is seen in this illustration photo. (CNS photo/Lucy Nicholson, Reuters)

St. John the Baptist Parish in Alvin, Texas, a Metropolitan Organization member, has provided partial rental support for about 30 families in which the primary earner has lost work as industries like construction and landscaping have retrenched under the pandemic.

Father John Taoson, pastor at St. John the Baptist, told CNS the parish community has determined it must help people in need, especially those families whose members are in the country illegally because they are ineligible for the rental relief funds.

He described the families as living in a deep “sense of desperation and we are also desperate trying to help them.”

While some communities have allocated a significant share of CARES Act funds for rental assistance, Dallas has not. Housing advocates have criticized the city for complicating the application process for receiving aid. About 1 in 4 of the people who said they needed help were successful, according to the Dallas Morning News.

For months advocates in Dallas have pushed officials to distribute rental assistance funds and expand the Centers for Disease Control moratorium on evictions. Dallas Auxiliary Bishop Greg Kelly has worked with CCHD-funded Dallas Area Interfaith on the effort.

“It’s very harmful,” Bishop Kelly said of the restrictions on accessing the money. “There’s no need for it either. The funds are there.”

Josephine Lopez Paul, lead organizer of Dallas Area Interfaith, said work continues on empowering and educating people about eviction prevention in the hope their voices will influence policymakers to better respond to their needs.

“Without the moral fabric of our congregations, families will be left out in the cold because nobody is advocating on behalf of families. Families are being left on their own,” she told CNS.

Advocates like Paul have praised the CDC’s three-month moratorium on evictions that was announced in September. It was extended until Jan. 31 with the passage of the most recent pandemic relief bill at the end of 2020. An additional $25 billion in emergency rental assistance was included in the law. 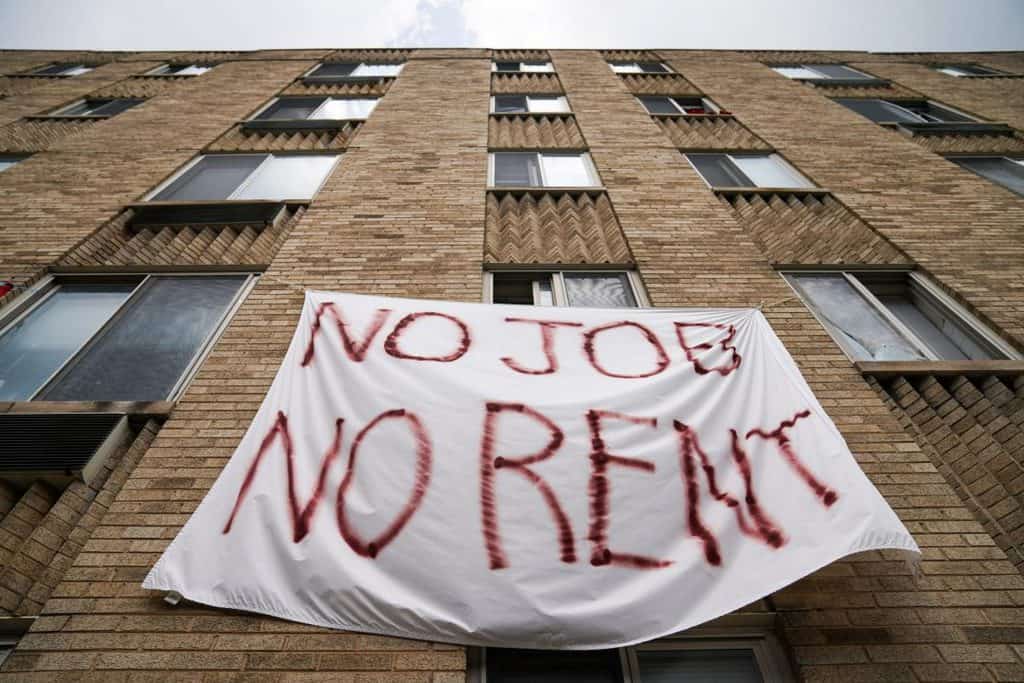 Residents in Washington push for the cancellation of rent Aug. 20, 2020, during the coronavirus pandemic. (CNS photo/Sarah Silbiger, Reuters)

Some states have added weeks or months to the moratorium. In Oregon, the moratorium has been extended by the state through June 30. The New York State Assembly passed an extension that lasts until May 1.

At St. Mary Magdalene Parish in Pittsburgh, parishioners have been invited to sign a prewritten letter to local state legislators to lengthen the moratorium and prioritize the needs of people facing eviction.

“There’s no benefit for anybody of having hundreds of thousands of people suddenly becoming homeless,” said Lois Campbell, who chairs the parish’s pastoral council. “There’s no benefit to landlords or people being pushed out of their home.”

Elsewhere, Laura Felts, executive director of United Tenants of Albany in New York, knows the state’s moratorium will eventually lift and that now is the time to develop long-term solutions to stem mass evictions that will result in millions of people becoming homeless.

“We need to see a brave policy solution. We’re seeing overwhelmingly that this isn’t something that can be resolved by nonprofits distributing emergency rent assistance,” said Felts, whose agency has received support for two employees through the Diocese of Albany’s Catholic Charities operation.

Lopez Paul agreed, saying the short-term fixes achieved through rental assistance payments to landlords are helpful, but a federally led effort is needed to address the shortage of affordable housing nationwide.

“These are not normal times. These are unprecedented times,” she said. “We haven’t seen an economic crisis like this since the Great Depression. If we have floods of homeless people, what are we going to do with them?”