Victims shot during attempted arrest of 28 people in the Philippines accused of being communist rebels.

The Philippine Church has condemned the killing of nine indigenous group leaders during an attempted mass arrest shortly before the New Year, saying the slayings worsened the climate of fear in the country.

The nine were shot dead on Dec. 30 when government forces attempted to arrest 28 people from the Tumandok indigenous group accused of being communist rebels in Tapaz in Capiz province in the Visayas region of the Philippines.

According to authorities, many of the suspects tried to resist arrest and those killed were shot after opening fire on security forces. Another 17 people were arrested, they said.

The Capiz Archdiocese, however, disputed the claim, saying it was unlikely the victims fired the first shots.  The archdiocese’s Social Action Center condemned what it called an unnecessary use of force and demanded a full investigation.

“Show us genuine results founded on truth and justice,” it said in a statement released on Jan. 3. 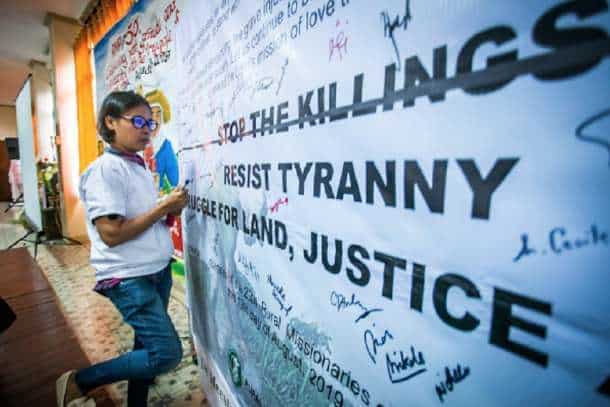 Zara Alvarez, an activist from Negros province in the central Philippines, signs a manifesto signifying her commitment to work for human rights in this August 2019 file photo. Alvarez was shot dead in Bacolod City on Aug. 17, 2020. (Photo: Mark Saludes)

“Do we have to kill our perceived enemies, especially the unarmed? Is this the way we celebrate Christmas as a Christian country and welcome the New Year? Can we consider this a great accomplishment that nine tribal leaders were killed?” he asked.

The bishop said he was no stranger to “red tagging” and extrajudicial killings as many churchgoers in his diocese have been accused of being members of the New People’s Army, the armed wing of the Communist Party of the Philippines.

“How long will this spiral of violence continue? Have we run out of peaceful means? Do we really, seriously believe this is an effective and lasting way to resolve our social ills?” he asked.

Bishop Alminaza also said that the incident was an attack against the Philippines’ indigenous people, the very group that the law sought to protect.

“Indigenous people are supposed to be protected by the government. They are defenseless and many of them still need education. Instead of killing them … arm them with an education so that they can grasp issues better.”

Feature image: Police officers and medical personnel bring the bodies of the nine victims to a hospital in Tapaz in the Philippines. (Photo: Ian Paul Cordero)