Biden plan stands in deep contrast to the current administration’s strategy in the region.

CHALATENANGO, El Salvador (CNS) — When President-elect Joe Biden takes office in January, he will embark on pursuing a policy agenda for Central America that many Catholic organizations have long supported.

It involves a $4 billion plan to eradicate conditions that drive immigration, including spurring economic development as well as combating violence and government corruption.

While it’s doubtful that he’ll be able to push the full funding through if the U.S. Senate remains in Republican control after runoff elections in Georgia Jan. 5, the plan stands in deep contrast to the Trump administration’s current strategy in the region.

Under President Donald Trump, policy toward Central America and neighboring Mexico largely focused on economic incentives and sometimes threats against the region’s political leaders to halt would-be migrants to the U.S. or lose economic aid.

Trump pressed Mexico, under President Andres Manuel Lopez Obrador, to enact harsher policies for migrants passing through the country on their way north, including limiting travel documents and implementing large-scale deportations for those from Honduras, Guatemala and El Salvador, where the bulk of migrants heading to the U.S. come from.

In December 2019, Salvadoran President Nayib Bukele, in an interview with the CBS news show “60 Minutes,” said he had made an agreement with the Trump administration to take in asylum-seekers from other countries, having them stay in El Salvador, even though the country was not prepared to do so ($51 million in aid from the U.S. was at stake).

Guatemala’s former president, too, made an agreement with the administration to designate it a “safe third country,” meaning that migrants who pass through Guatemala headed north must first seek asylum there instead of heading to the U.S., with a similar agreement also extended to Honduras.

All three countries, referred to as the “Northern Triangle,” however, have some of the highest incidences of violence in the world for nations not at war.

Biden, in turn, speaks of a plan that focuses less on enforcement and more on improving the economic lot of those who live in the region as a means of deterring immigration.

“This is forcing too many families, unaccompanied children and adults,” the plan said, “to make an untenable choice: leave behind everything they know and undertake a dangerous journey to seek a better life, or stay and live under the constant threat of violence, persecution, hopelessness, or even death.”

Even before current world events, the region needed all the help it could get. As if the economic realities of high unemployment, low education rates and institutional corruption didn’t already provide an uphill battle, COVID-19 closures have further lashed the region’s floundering economies, along with a series of back-to-back tropical storms that have destroyed crops and infrastructure. 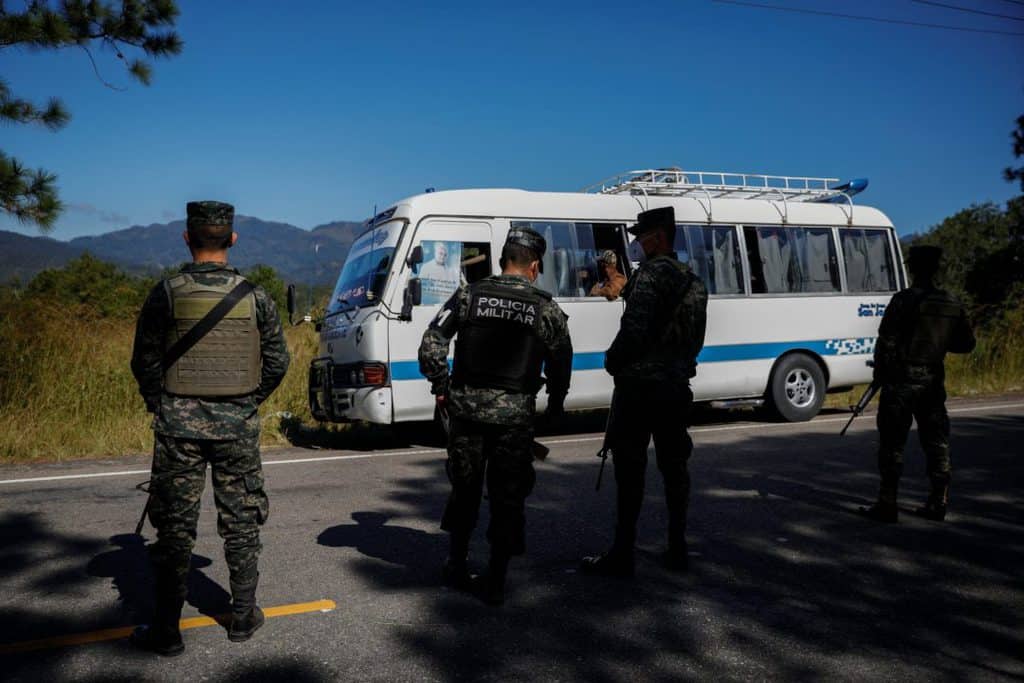 Members of Honduran security forces stand in front of a bus at a check point in Ocotepeque, Honduras, Dec. 10, 2020. The bus is carrying people taking part in a new caravan of migrants, set to head to the United States. (CNS/Jose Cabezas, Reuters)

“By criminalizing migration, militarizing the border region and using aid to bully our neighbors, the current U.S. administration has contributed to suffering and rising levels of corruption, violence, economic insecurity and hunger in Central America and Mexico,” the letter said.

“Hurricanes Eta and Iota — which have had a catastrophic impact on Honduras and Guatemala due to climate change — have only caused more pain and pressure to migrate … we must do more than return to 2016,” the letter said. “We must fundamentally change how the U.S. relates to Central America.”

Though it’s a momentous task, it’s one that Biden tackled with some degree of success as vice president under the Obama administration.

“The challenges ahead are formidable. But if the political will exists, there is no reason Central America cannot become the next great success story of the Western Hemisphere,” he said in a 2015 op-ed in The New York Times.

That year, he was able to gather enough bipartisan votes to support a $750 million aid package for the region.

The December letter signed by the Catholic leaders recommends the Biden administration provide:

— Support in the form of such economic aid, from the U.S. as well as international partners.

— Create well-paying jobs, and improve education so that youth don’t have to leave their home countries.

— Push against corruption in institutions and control violence, both domestic violence and violence carried out by governmental institutions.

— Call for environmental protection and demilitarization.

— Create a wider net of “legal pathways for people from Central America to migrate safely.”

“In every migrant seeking refuge at the US-Mexico border, God is calling us to hear the cry of the poor and the cry of the earth in the Americas,” said El Paso’s Bishop Seitz in a news release from the Hope Border Institute, which also participated in the effort to address Biden.

“Jesus calls us to solidarity with the young people who cannot find work, the families terrorized by crime, the indigenous communities forced from their lands, and the human rights defenders working to build a more just society in Central America,” the bishop said.

“It’s time to turn the page on wall building, detention and deportation and finally take up our responsibility as a country to honestly and boldly address the root causes of migration.”

Dylan Corbett, the institute’s executive director, views the potential new path as a “generational opportunity to turn the page on Central America policy.”

“Our message to President-elect Biden is clear: if we’re serious about addressing the root causes of migration, we need to fundamentally change how the U.S. relates to the region,” he said. “We need safe and legal ways for people to reunite with family, work and seek refuge, and we need to reject the militarization of borders and criminalization of migrants.”

It’s a posture often taken by the U.S. Conference Catholic Bishops, organizations such as the Catholic Legal Immigration Network, and groups such as Sisters of Mercy and countless others whose calls against punishment of migrants and for fixing social conditions in Central America have gone largely unheeded in the past few years.

In its November 2020 report titled “Improving the U.S. Immigration System in the First Year of the Biden Administration,” the New York-based Center for Migration Studies said the task ahead is one that was in need of improvement long before Trump policies.

“The new administration will face substantial challenges in putting immigration and refugee policy back on track — not just reversing ill-advised policies of the past four years but also improving a system that was in need of reform well before the current administration took office,” the report said.

Feature image: Hondurans ride in the back of a truck in Copan, Honduras, Dec. 10, 2020, as they take part in a new caravan of migrants, set to head to the United States. (CNS/Jose Cabezas, Reuters)