On Feast of All Souls, Pope says ‘Hold Tightly’ to Hope

COVID-19 pandemic forces Pope Francis to forego his usual practice of celebrating All Souls Mass in a cemetery.

VATICAN CITY (CNS) — When life is difficult and when one is mourning the passing of a loved one, it is time to pray for the gift of hope and the ability to say with the prophet Job, “I know that my redeemer lives,” Pope Francis said while celebrating Mass on the feast of All Souls, Nov. 2.

The pope said that remembering loved ones who have died is a particularly important time to “hold tightly to the rope” of the anchor of hope, which is Christ.

The COVID-19 pandemic forced Pope Francis to forego his usual practice of celebrating Mass on the feast of All Souls in a cemetery — in Rome or nearby — with people who were visiting the graves of their loved ones.

Instead, he presided over a private Mass inside the Vatican, in the chapel of the Pontifical Teutonic College, then visited and blessed graves in the Teutonic Cemetery, which has existed since the Middle Ages and now is reserved mainly for the burial of German-speaking priests and members of religious orders.

Later, he went into the grotto of St. Peter’s Basilica to pray at the tombs of deceased popes. 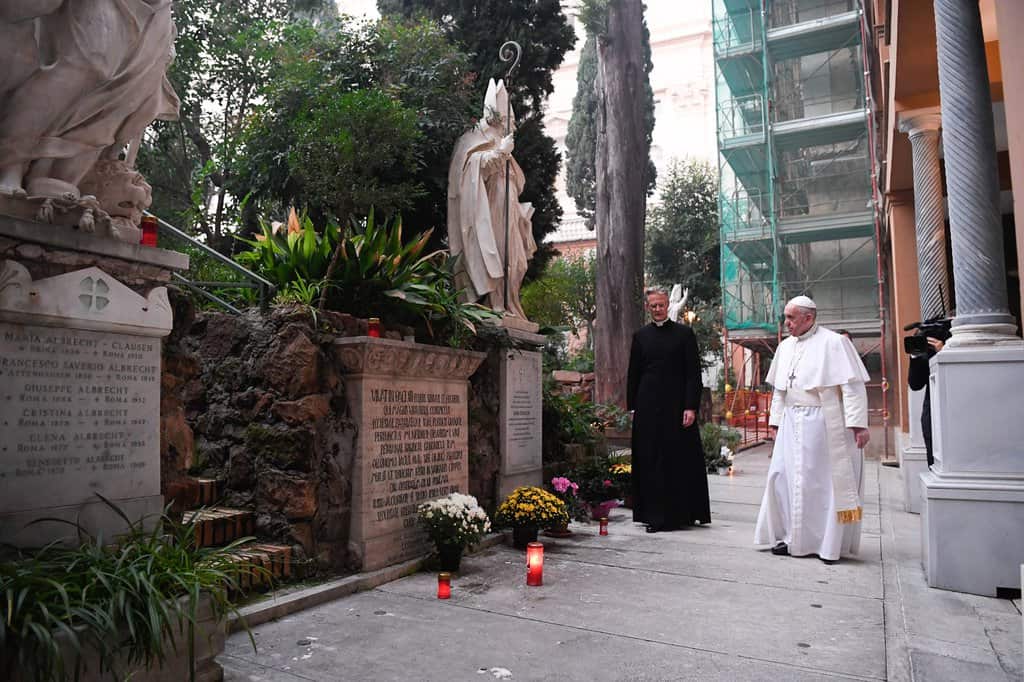 Pope Francis walks to the tombs in the cemetery of the Pontifical Teutonic College at the Vatican to pray on All Souls’ Day, Nov. 2, 2020. (CNS/Vatican Media)

The pope began his homily at the Mass by describing the hope demonstrated in the Book of Job, when the prophet is “defeated” and on the point of death. Job says, “I know that my vindicator lives” and “my own eyes, not another’s, will behold him.”

“This certainty at almost the last moment of life, this is Christian hope,” Pope Francis said. “It’s a hope that is a gift.”

“So many things lead us to despair, to think that everything will end up in defeat and that after death there is nothing,” he said. But the voice of Job should resound in the hearts of Christians, saying, “I know that my redeemer lives.”

St. Paul, in the Letter to the Romans, says “hope does not disappoint,” he said; “hope attracts us and gives meaning to life. I don’t see in the beyond, but hope is a gift of God that draws us to life, toward the joy of eternal life.”

“Hope is an anchor,” the pope said, and believers must cling to the rope that leads to it “in moments of joy and in terrible moments.”

The kind of certainty Job exhibited is “a gift of God,” something that people cannot simply muster up for themselves without God’s help, he said. It is a gift that must be requested from God.

Jesus confirms the promise that hope will not disappoint in the Gospel of St. John, when he says, “Everyone who sees the Son and believes in him may have eternal life, and I shall raise him on the last day,” the pope said.