The example of four martyred churchwomen in El Salvador plants seeds of service in another generation of missioners, including Melissa Altman.

WASHINGTON (CNS) — Putting the words of the Gospel into action was always an important part of Melissa Altman’s Catholic family in Pennsylvania.

Some of her childhood experiences of that family cornerstone came from a great uncle, a Maryknoll priest, who ignited the kindling of a spiritual fire that led her to learn more about the life and experiences of missioners.

Those missioners included two Maryknoll sisters, a layperson who had completed her missionary training at Maryknoll in New York, and an Ursuline sister who were murdered in El Salvador in 1980, just a year after Altman was born.

How the women lived and worked in El Salvador would prove to be an inspiration that later moved Altman and her husband, Peter, to become Maryknoll lay missioners and take their young family to serve in the small but troubled Central American nation.

Altman said that what she knew about the women and their work, coupled with what she learned in college about the effects of the Cold War on Latin America and U.S. ties to it, “really affected me, and it planted a seed that I didn’t even realize was there at that time.”

“That seed kept growing without me realizing it,” Altman said in a Nov. 18 interview with Catholic News Service.

In 2014, she and her husband, with their 3-year-old daughter and 7-year-old son, went to live n the countryside of El Salvador, where they offered recreational programs for children.

They now live in the city of Zaragoza and Altman works with a cooperative for women. Zaragoza is located in the department of La Libertad, where two of the murdered women, Ursuline Sister Dorothy Kazel and Cleveland Lay Missioner Jean Donovan lived.

The two often partnered with Maryknoll Sisters Ita Ford and Maura Clarke, who also worked with the poor in the rural setting of Chalatenango in northern El Salvador.

The four women collaborated in seeking refuge for those battered by the country’s civil strife that reached a boiling point during the last months of the women’s lives in late 1980. The four would end up being buried in a shallow grave together after being raped and killed by Salvadoran military.

“I am lucky to be working in a community that actually knew them,” Altman said of the U.S. women.

Since many in Zaragoza remembered the U.S. missionary women shuttling children to safety as well as transporting food and medicine between La Libertad and Chalatenango, “they knew what I was about because of Maryknoll,” Altman said.

“That brought me close to the memory and energy of the four women and Carla Piette (another Maryknoll missionary sister who died in a flash flood there) and other catechists who put their life out there for human dignity in this country,” Altman told CNS. “I connected with that.”

Altman is now connected with them in a different way, after having collaborated with nonprofits and a historical memory group that painted a popular mural of martyrs in Zaragoza in 2016. It features the U.S. women next to St. Oscar Romero, the iconic archbishop of El Salvador martyred on March 24, 1980, a few months before the women were assassinated on Dec. 2. 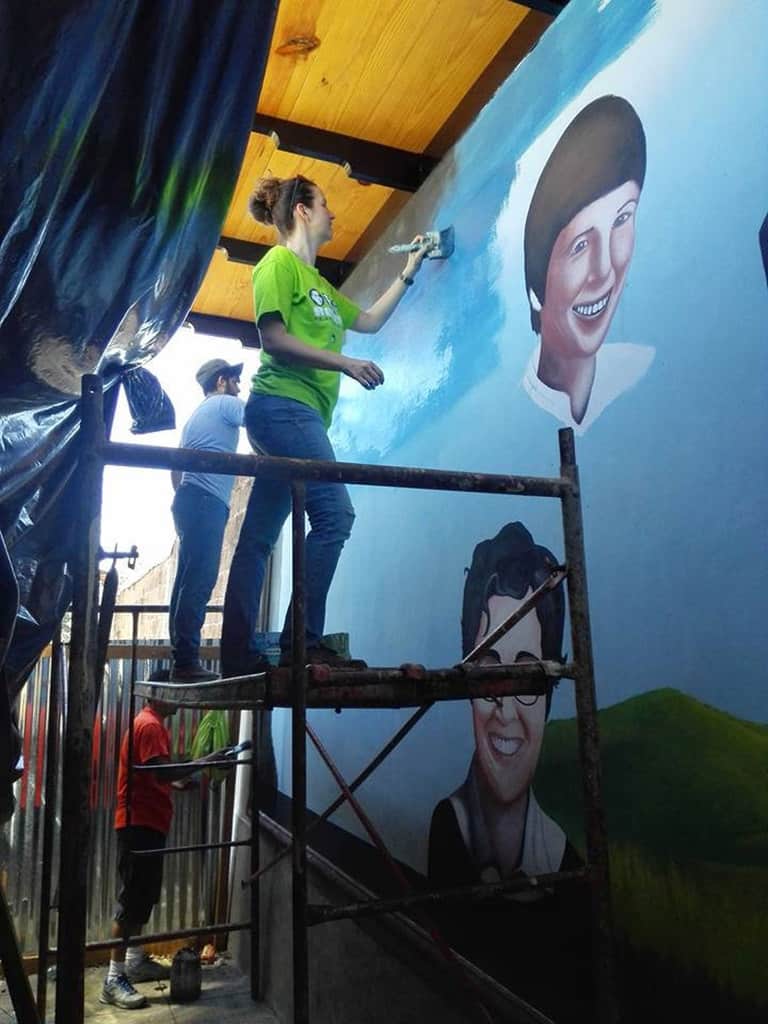 Melissa Altman of the Maryknoll Lay Missioners paints the sky in a mural Dec. 11, 2016, in Zaragoza, El Salvador, featuring the four U.S. Catholic women assassinated in the Central American country Dec. 2, 1980. Four decades after the killings, Altman, who serves in mission with her family in El Salvador, said the women’s example of faith inspires her to continue their work. (CNS/Fatima Pacas for International Partners in Mission via Melissa Altman of Maryknoll Lay Missioners)

The experience of mission work has been a gift to her children, she said.

“We wanted to give our kids an opportunity to see the world as it really is and not just through this bubble,” Altman said. “We wanted to experience living in a different culture but also putting Catholic Social Teaching into action, truly living that out.”

“To say, ‘I don’t have the answers, but let’s figure it out together, go through it together,'” she said. “It is the root of my faith to say: ‘You’re important, your life matters, you have dignity and I want to be with you in this journey, whatever happens,'” she said.

She echoes words Sister Ford wrote in 1977 about her experience with the people of Latin America: “Can I say to my neighbors, ‘ I have no solutions to this situation; I don’t know the answers, but I will walk with you, search with you, be with you.’ Can I let myself be evangelized by this opportunity? Can I look at and accept my own poorness as I learn it from other poor ones?”

Altman said that attitude “is important here and such a part of the culture,” that it’s a privilege to continue “the groundwork they laid during the darkest times.”

The last of the Maryknoll community of sisters left a couple of years ago, Altman said. Six lay missioners and two priests continue Maryknoll’s mission in El Salvador.

Altman admits it was a bit daunting for her extended family in the United States when she and Peter took their children so far from home. “They used to ask: ‘When are you going to come home?’ “Altman said.

And she would reply: “Well, this is kind of home now.”

Her daughter doesn’t remember much about the United States and her son, at 13, has become interested in the rural communities where they first lived in El Salvador.

“It’s been life-giving, to see the richness of when we lived in the countryside, the traditions, the foods, the hospitality, not to say that people in the city aren’t hospitable,” she said.

“But in the ‘campo’ (the countryside), everybody has time to chat and take a few moments to see how you’re doing,” Altman said. “My son advocates for rural areas because he lived there. His good friends are still there and it’s a good opportunity to advocate for them to city kids who have a prejudice against those who live in the campo.”

With time, said Altman, her family in the United States has learned that what she is doing is linked to the Catholic values they inspired in her as a child.

“My family is very religious, very Catholic,” Altman said. “As hard as it was to know we were going far away, they are very spiritual, and they can see that we’re happy, our kids are happy, that we feel fulfilled in what we’re doing here and to them that’s a really important part of living out your faith, your calling. We’re doing that.”

To some, that’s still a difficult concept.

“People will say, ‘Oh, look at all that you left (behind),’ but there’s a lot of really good things here,” she said. “From the outside, in the news, you can’t see that. But if you are here and you get a chance to be around these communities, you get a chance to see what’s genuine.”

Featured image: Members of various nonprofits and a historical memory group pose for a photo March 26, 2017, at the inauguration and blessing of a mural in Zaragoza, El Salvador, featuring the four U.S. Catholic women assassinated in the Central American country on Dec. 2, 1980. Four decades after the killings, the example of their faith inspires others to continue their work. St. Oscar Romero, slain while saying Mass March 24, 1980, also is featured. (CNS/Fatima Pacas for International Partners in Mission via Melissa Altman of Maryknoll Lay Missioners)