Though Cambodia has been spared COVID fatalities, its struggles continue.

Cambodia shut its borders, both international and between provinces, in April of this year in a move to combat the spread of COVID-19, and thus far, the virus has been kept at bay.

According to the World Health Organization, as of early November 2020, Cambodia had 292 confirmed cases of COVID-19, and zero deaths. Almost all the cases were acquired overseas, while only 38 were acquired locally.

“As a precautionary measure, around 400 garment factories in Phnom Penh were shut down, as were government schools,” says Father Kevin Conroy, a Maryknoll priest associate based in Phnom Penh, explaining some of the likely reasons for Cambodia’s low rate of community transmission.

“The majority took to mask wearing early on, and Cambodia is a relatively non-tactile society,” he says, noting that hand shaking, hugging and kissing are rare. “It has a spread-out population, and much of life is lived out of doors. Even transport consists mostly of motorcycles and open air tuk-tuks (three-wheeled auto rickshaws). All these factors point to a lower risk of community transmission.”

Scientists have also speculated that populations in southeast Asia may have some immunity to COVID-19 conferred by their exposure to other coronaviruses, including SARS.

Father Conroy, who spoke from Phnom Penh during a Maryknoll webinar earlier this year, held up a Cambodian crucifix representing Christ with half a leg missing—a reference to the many land mine victims in this nation.

The crucifix of a maimed Jesus is a reminder that while COVID infection rates in Cambodia are mercifully low, the country has been battered in many other respects for four and a half decades. From the genocide of the Khmer Rouge killing fields to civil war, economic collapse, the AIDS epidemic and human trafficking, the Cambodian people have suffered an astonishing amount in recent years.

One result is a land that is suffering high rates of trauma and mental illness. Father Conroy is well prepared to work in such an environment. The missioner from Cleveland, Ohio, has a doctoral degree in clinical mental health counseling and a deep knowledge of the mental health field. “There is trauma at all levels of society, from the poorest to the richest, from the youngest to the oldest,” he says. While individuals with firsthand memories of Khmer Rouge atrocities are fewer each year, he says, the scars remain in their children and grandchildren. “Trauma gets passed down through generations, as does resultant mental illness,” he explains.

Father Conroy’s mission involves teams of mental health workers visiting remote rural areas to serve people suffering from schizophrenia, depression and other mental illnesses. Those areas have few facilities to treat such cases. Cambodia’s mental health budget is only 0.02 percent of its total health budget, with just two hospitals in the country having psychiatric facilities.

The lack of mental health resources is not just a problem in itself, but a reflection of prejudices against the mentally ill that are rife in Cambodia. Father Conroy describes the stigma. “Some villages where there was a mentally ill person living would put up a sign: ‘Mad man,’ ” he says. “If that person was considered dangerous, they would be chained up.”

The mission team makes sure such patients are treated with anti-psychotic medications, while their families and wider village communities receive counseling to help deal with the illness in their midst. “By treating one mentally ill person, it’s as if we were healing the whole village,” Father Conroy says.

This work has continued through the COVID-19 pandemic. The major difference is that now, on arriving at a village, teams start with a presentation about hygiene, mask wearing and social distancing so that people are made aware of the dangers of the virus. Father Conroy notes that, early on in the outbreak, he repurposed $3,000 from his mental health budget to cover masks and sanitizer for provincial hospitals. “We were the first to get those essential deliveries out there,” he adds. 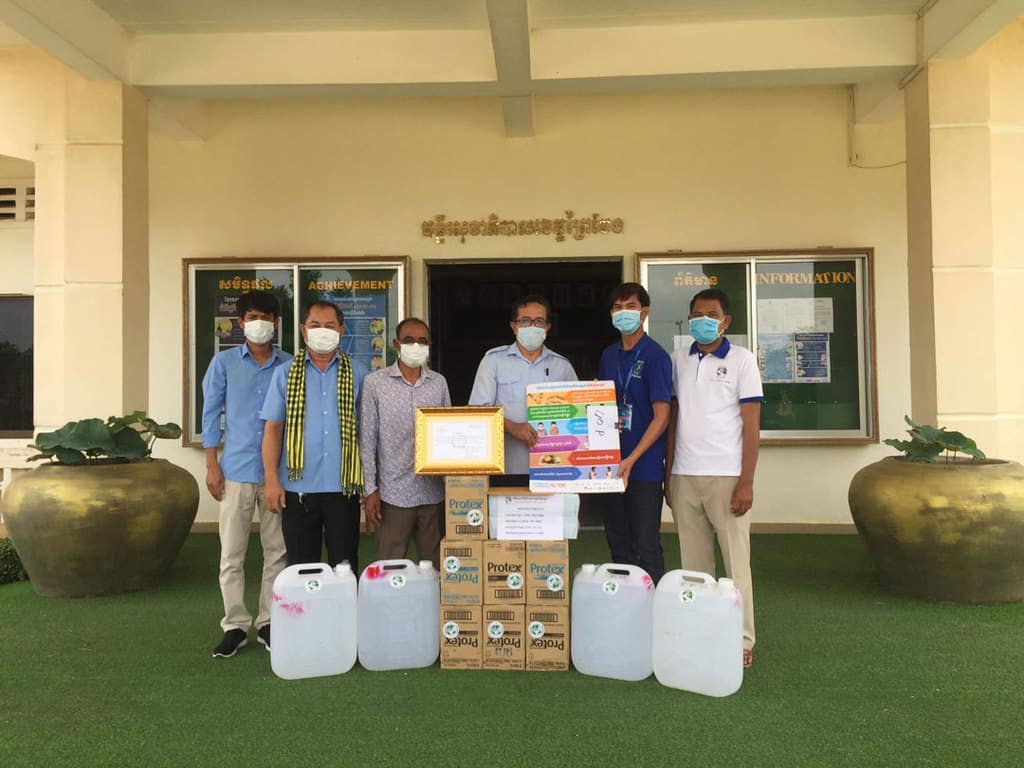 Thanks to Maryknoll Father Kevin Conroy’s efforts, personal protective equipment was delivered to the Provincial Department of Health in Prey Veng Province, about two and a half hours from Phnom Penh, capital of Cambodia. (Courtesy of Keven Conroy/Cambodia)

Another lasting effect of Cambodia’s traumatic recent past is economic fragility, which makes the country especially vulnerable to the pandemic’s effects. Many rural Cambodians say they are more likely to die from hunger than from COVID. Father Conroy recognizes that his own work is inextricable from establishing food security and basic economic stability.

“We cannot talk about mental health in the developing world without talking about livelihood and basic needs,” he says. “Food and shelter. Those are intrinsic to mental health in our part of the world.”

Cambodian society, he says, does not always accept that mentally ill people are able to function normally. “We must break that cycle,” the missioner says. “A livelihood program is an essential part of our work, especially so during COVID times. Our patients can take care of gardens or help on the family farm, or perhaps sell items from a little stall in front of the house.”

Father Conroy says he has refocused Maryknoll’s livelihood program there to be a food security program, and notes most Cambodians are farmers.

“With so many people coming back to the farms, from abroad or closed factories, it is more important than ever to feed all those extra people at home,” he says. “Our clients can become productive members of the community. But this year the crops failed from too much rain, and so the newly unemployed also feel like failures themselves, no longer able to support their families who depended on their wage remittances. They began to suffer from the stigma and the shame of being unemployed, which in turn has affected their mental health.”

It’s not only the farming sector that has suffered. Cambodia became a booming tourist destination in recent years, drawing many foreigners to its temples and beautiful beaches. Today the renowned temple complex Angkor Wat, once teeming with visitors, is almost deserted. Bars, hotels and restaurants have closed. Non-citizens entering the country must pay a refundable deposit of $2,000 and buy special health insurance, as well as show a normal temperature reading on arrival. Not surprisingly, almost no tourists are currently entering Cambodia.

Another Maryknoll missioner in Cambodia, Sister Helene O’Sullivan, runs Horizons, a hostel for poor girls from the remote provinces who are apprenticing in the tourism industry and working in the big international hotels to support themselves and their families. With the arrival of COVID-19, the hostel had to close, along with all schools. Sister O’Sullivan says that four girls in the program were eventually diagnosed with anemia.

“This had never been a problem when they were living at the hostel,” she points out. “I paid their medical bills, but the staff and I decided it was better to prevent this problem among the other girls and so we now provide $30 a month in food security money to the families of the 44 girls in the program. Other sisters’ congregations are doing the same as the need for food relief becomes more and more apparent as the lockdowns continue.”

With so many social problems interlinked, it’s hard to calculate the full effect of COVID-19 on Cambodia’s population. Maryknoll missioners have played an important role in helping many Cambodians, before and during the pandemic. But, as is so often the case, those already in distress are especially challenged by crises, one way or another.

Featured image: Maryknoll Father Kevin Conroy and Meta, a member of his staff, give a presentation on COVID-19 at the Home for Hope, run by the brothers of Mother Teresa’s Missionaries of Charity for the destitute sick and disabled in Cham Chao, Cambodia. (Courtesy of Kevin Conroy/Cambodia)