The number of countries where Christians face some form of hostility is rising.

WASHINGTON (CNS) — Christians top the list for countries where they face either governmental or social hostility, according to a new report issued Nov. 10 by the Pew Research Center.

Christians have topped the list each year since Pew started collecting data in 2007.

The number of countries where Christians face some form of hostility rose from 143 in 2017 to 145 in 2018, the latest year for which statistics are available. Christians were followed in order by Muslims, Jews, “others,” folk religions, Hindus, Buddhists and the religiously unaffiliated.

The reason, according to the study’s lead researcher, Samirah Majumdar, is simple: “They are also the largest faith groups in the world and the most geographically dispersed.”

She added, “A striking data point beyond that: The group that seems to be harassed in the third highest proportion is Jews, and they number 0.2 percent of the global population.” Jews faced some form of hostility in 77 countries in 2018. “We’ve seen this in previous years as well,” Majumdar told CNS in a Nov. 6 phone interview.

This is Pew’s 11th annual report analyzing the extent to which governments and societies around the world restrict or are otherwise hostile to religious beliefs and practices.

Pew cited, in part, “a rise … in the number of governments using force – such as detentions and physical abuse – to coerce religious groups.” It noted that the more authoritarian a government is, the more likely it will harass religious adherents. 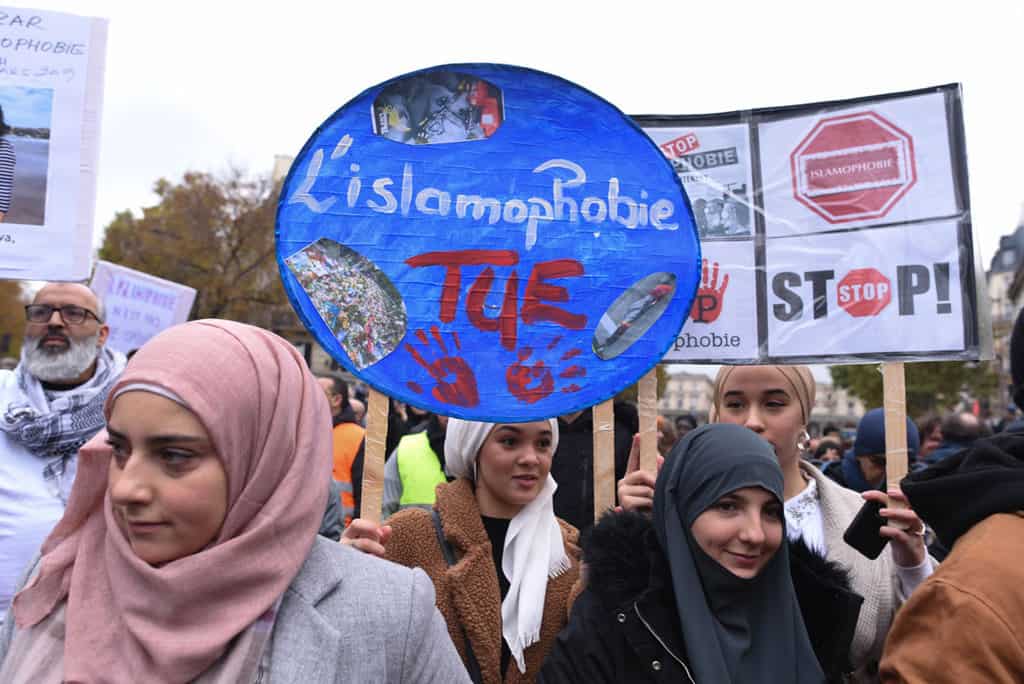 People in Paris march against islamophobia Nov. 10, 2020, two weeks after an attack against a mosque in Bayonne and a rise in what activists allege is anti-Islam scaremongering among French leaders. The placard reads “Islamophobia Kills.” (CNS/Mehdi Chebil, Hans Lucas via Reuters)

“Among the 10 countries with very high levels of social hostilities, there were four authoritarian states, three hybrid regimes and three flawed democracies — India, Israel and Sri Lanka,” the report said. “The five countries categorized as full democracies with high levels of social hostilities are all in Europe — Denmark, Germany, the Netherlands, Switzerland and the United Kingdom — and all had reports of anti-Muslim and anti-Semitic incidents.”

In assessing the level of government restrictions, the Middle East-North Africa region ranked highest at 6.2 out of 10. But the region with the biggest leap in governmental restrictions was Asia, from 3.8 to 4.4, “partly because a greater number of governments in the region used force against religious groups, including property damage, detention, displacement, abuse and killings,” the report said. China reached a new peak, at 9.3 out of 10.

“In India, anti-conversion laws affected minority religious groups. For example, in the state of Uttar Pradesh in September (2018), police charged 271 Christians with attempting to convert people by drugging them and ‘spreading lies about Hinduism,’ ” the Pew report said.

“The Middle East-North Africa region had the largest share of countries where Christians were harassed in 2018. Of the 20 countries in the region, 19 had some form of harassment targeting Christians — either by governments or social groups,” it added.

“Social harassment occurred in 15 countries, the highest share — 75 percent — since the beginning of the study, while government harassment of Christians was reported in 19 countries in the region, down from all 20 in 2017. For example, in Algeria, a court denied an interfaith couple’s marriage application because one of them was a Christian.”

Governments with an official religion “tend to favor one or two religious groups,” Majumdar said, yet even “religious groups that are favored can also be harassed.”

Only two countries, El Salvador and South Korea, had large increases — two points or more — in their overall scores.

In El Salvador during Holy Week in 2018, “armed men robbed a priest and his companions on their way to Mass and killed the priest. Then, in July, Salvadoran gang members killed a Protestant pastor for reportedly persuading six members to leave the gang and join his congregation,” the report said.

“Gang members also extorted money from congregations in exchange for letting them operate, or in some cases made them divert charitable donations to gang members’ families,” it added.

In neighboring Nicaragua, according to Amnesty International — one of a phalanx of sources used by Pew to formulate its report — the government “committed or permitted” serious human rights violations, including attacks on the Catholic Church and its clergy, especially those who helped protect protesters.

In July 2018, the report said, “police conducted a 15-hour attack on a church in the capital city of Managua that was providing shelter to student protesters; two people died and at least 10 were injured in the police action. And in September, a deputy chief of police assaulted a priest for asking government supporters to turn down ruling-party propaganda music playing outside the church during a funeral.”

The United States came in at 2.3 — “moderate” levels of restrictions in Pew’s terminology. The report cited the synagogue attack in 2018 in Pittsburgh as worshippers were shot during services, killing 11 people and injuring six others in what Pew said was “one of the deadliest assaults on Jews in American history.”

The State Department’s human rights report is a primary source for Pew, but “the State Department doesn’t publish reports about itself, so we actually have to depend on other sources,” Majumdar said, including FBI hate crime statistics and Justice Department reports on religious freedom cases that surfaced over the year.

Beyond what appears in the report, “the way we break it down, we can find data on the different groups’ general harassment by the government,” Majumdar said. “We also do religious-denomination breaks of social harassment as well. We can also provide data on countries in general where minority groups are being targeted.”

Featured image: Volunteers in Mosul, Iraq, clean the Syriac Catholic Church of St. Thomas Oct. 28, 2020. News reports said the effort “seeks to sweep away the horrors” of three years of rule by Islamic State militants and welcome back members of minority faiths who fled IS. (CNS/Abdullah Rashid, Reuters)