MIAMI (CNS) — Catholic social teaching, “with its understanding of natural law,” can bridge the divisions that exist in U.S. society between religious adherents and secularists, said Archbishop Thomas G. Wenski of Miami.

Archbishop Wenski portrayed the divide this way: “One side, the secularists, holds for a radical autonomy by which truth is determined not by the nature of things but by one’s own will. The religious side — our side — holds that men and women are not self-creators but creatures, that truth is not constructed but received, and that it must reflect the reality of things.”

“Catholic teaching proclaims the dignity of every human being but also acknowledges the reality of sin,” Archbishop Wenski said, addressing Catholic social teaching in his column for the November issue of the Florida Catholic, Miami’s archdiocesan newspaper.

“Our police forces, our social services agencies, our schools, our courtrooms deal with the consequences of sin every day,” he added.

“Today we see much anger in our society. And much of that anger is seen in our streets and expressed in social media,” the archbishop said. “We hear warring slogans: ‘Black lives matter,’ ‘blue lives matter,’ ‘all lives matter,” and from those who identify as pro-life, ‘unborn lives matter.’ And they all do matter — beneath these slogans there is an argument about ‘who truly belongs to our society?’ and ‘who is shut out?'”

He added, “Catholic social teaching on the life and dignity of the human person, on human solidarity, on the common good and the necessity for governments to respect the principle of subsidiarity can make important contributions to addressing the social unrest that besets our society today as it faces the challenges of enduring racism, growing inequality and the intolerance of a ‘cancel culture.'”

“As Catholics, we should not get caught up in internecine arguments about ‘who is too Catholic’ and ‘who is not Catholic enough,’ ” Archbishop Wenski says.”Every baptized Catholic can call himself or herself a ‘practicing Catholic’ because this life is our one chance to practice the faith until we get it right.”

When Irish novelist James Joyce described the Catholic Church as “here comes everybody,” he did so disparagingly, Archbishop Wenski said. “But the church does welcome everybody — saint and sinner, rich and poor, the learned and the unlettered.”

Much is being made of the election of Joe Biden as president, since Biden would be only “the second president in our history who identifies himself as a Roman Catholic,” Archbishop Wenski said.

On Nov. 7, the media declared Biden president-elect, as lawyers for President Donald Trump challenged vote totals in some key battleground states. “As I write this column,” the archbishop noted, “it appears unlikely” Trump “will prevail.”

“Because of his (Biden’s) apparent dissent from Catholic teachings due to his support of certain anti-life policies of his party (the Democrats), he has been criticized by many for ‘not being Catholic enough,'” he added. “But at the same time, our newest Supreme Court justice (Amy Coney Barrett) has been criticized by others as being ‘too Catholic.'” 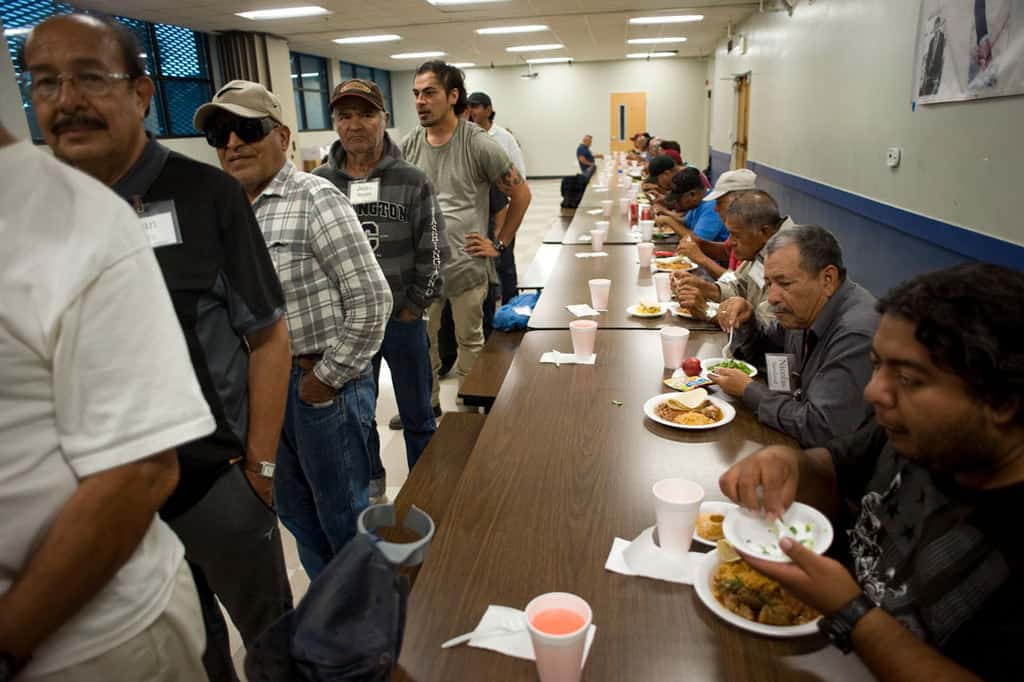 Men eat while others wait in line September 2018, at Dolores Mission Church in Los Angeles. The Jesuit-run church’s Guadalupe Homeless Project provides housing and social services to homeless men and women. The project typifies the principle of Catholic social teaching on life and the dignity of the human person. (CNS/David Maung)

While Biden will be just the second Catholic among 46 men to serve as president, there are currently six Catholics on the Supreme Court, and 31% of those in Congress are Catholic despite Catholics accounting for just a bit over 20% of the U.S. population, noted Archbishop Wenski. “And Catholics are likewise overrepresented in law enforcement and the legal profession.”

“This is quite an achievement considering that for much of our nation’s history, Catholics were looked on with suspicion as being ‘un-American,’ and ‘anti-Catholicism’ remains a deeply entrenched bias in American life,” he said.

“As Catholics, we should not get caught up in internecine arguments about ‘who is too Catholic’ and ‘who is not Catholic enough.’ In any case, Jesus will sort it out on Judgment Day,” Archbishop Wenski said.

“In the meantime, every baptized Catholic can call himself or herself a ‘practicing Catholic’ because this life is our one chance to practice the faith until we get it right,” he added. “And, because we all are sinners, we all must practice very hard.”

Feature image: Pope Francis greets Archbishop Thomas J. Wenski of Miami during a meeting with U.S. bishops at the Vatican in February 2020. The archbishop said in a column in the Florida Catholic, Miami’s archdiocesan newspaper, in November 2020 that Catholic social teaching can bridge divisions in society. (CNS/Vatican Media)