Addressing 40th anniversary of the Jesuit Refugee Service, Biden says will raise cap on refugees to 125,000 next year.

WASHINGTON (CNS) — Weeks after the administration of President Donald Trump announced it was dropping to a historic low the cap on the maximum number of displaced people the U.S. decides to resettle in a federal fiscal year, President-elect Joe Biden said Nov. 12 he would be heading in a dramatically different direction.

Addressing those gathered for a virtual event marking the 40th anniversary of the Jesuit Refugee Service, Biden, in a prerecorded video, said his administration would raise the 15,000 cap set by the Trump administration for fiscal year 2021 to 125,000 refugees.

During the Trump presidency, the U.S. Conference of Catholic Bishops, along with other Catholic organizations and a variety of faith and secular groups, has struggled in its advocacy efforts to allow more refugees into the country, given the record number of forcibly displaced people around the world—almost 80 million, according to the United Nations’ refugee agency, the U.N. High Commissioner for Refugees.

Hours after taking office in January 2017, the Trump administration announced it was cutting the cap of 110,000 allowed under the Obama administration to 50,000. The administration consistently lowered the number each fiscal year.

Last year, the administration announced it was setting the cap at 18,000 refugees for the 2020 fiscal year, but fewer than 10,000 have been allowed in. 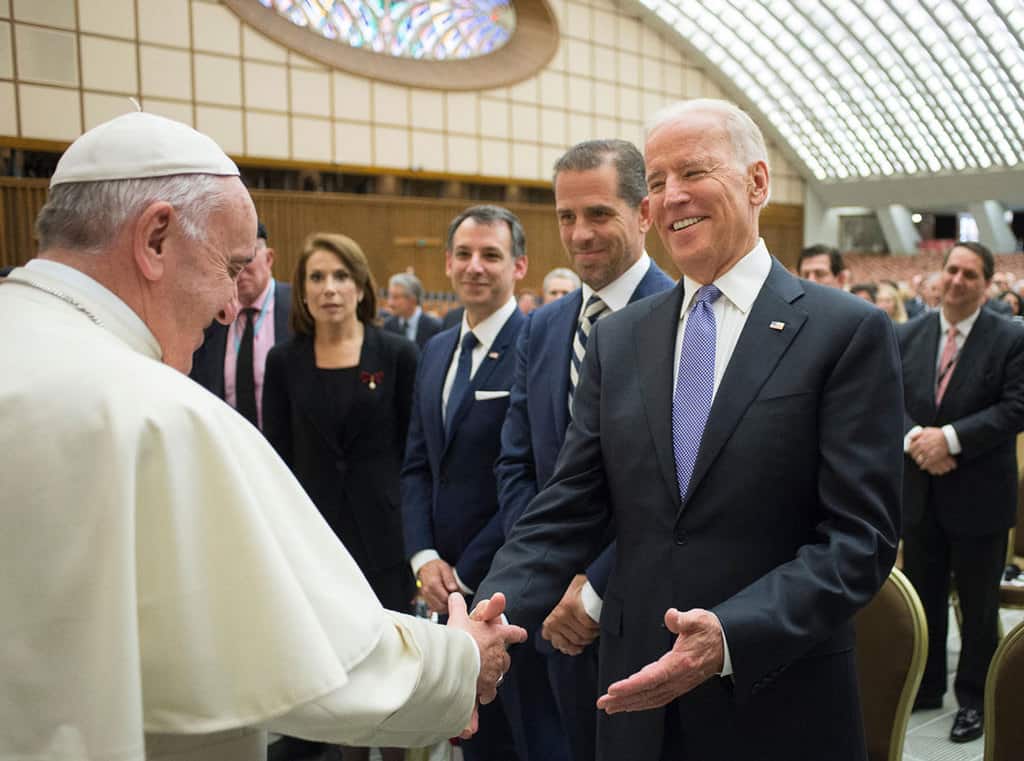 Pope Francis greets then-Vice President Joe Biden after both spoke at a conference on adult stem cell research at the Vatican in this April 2016, file photo. News organizations have projected that Biden will be the 46th president of the United States, making him the second Catholic in the country’s history to be elected to the nation’s highest office. (CNS/L’Osservatore Romano)

Biden, in the video for the JRS event, said he would return to the upward trend the U.S. had been on since the federal U.S. Refugee Program began in 1980.

“The United States has long stood as a beacon of hope for the downtrodden and the oppressed, a leader in resettling refugees and our humanitarian response. I promise, as president, I’ll reclaim that proud legacy for our country,” said Biden, declared by the media Nov. 7 as winner of the presidential election. The Trump campaign has filed lawsuits in several states challenging vote counts.

Ashley Feasley, director of policy for Migration and Refugee Services at the USCCB, said in an interview with Catholic News Service that the change in policy for the U.S. would take some ramping up of a network of agencies, international and domestic, whose resettlement work has trickled in the past few years.

Biden would need to issue a new Presidential Determination on Refugee Admissions—what’s needed to increase the number of those allowed in, but even if he does it on his first day in office, it’s going to take a lot of effort, rebuilding relationships with global agencies such as UNHCR, to get the program back up to what it once was.

“I don’t see them getting to 125,000 this fiscal year, but I do see a rebuilding of the infrastructure,” Feasley said. 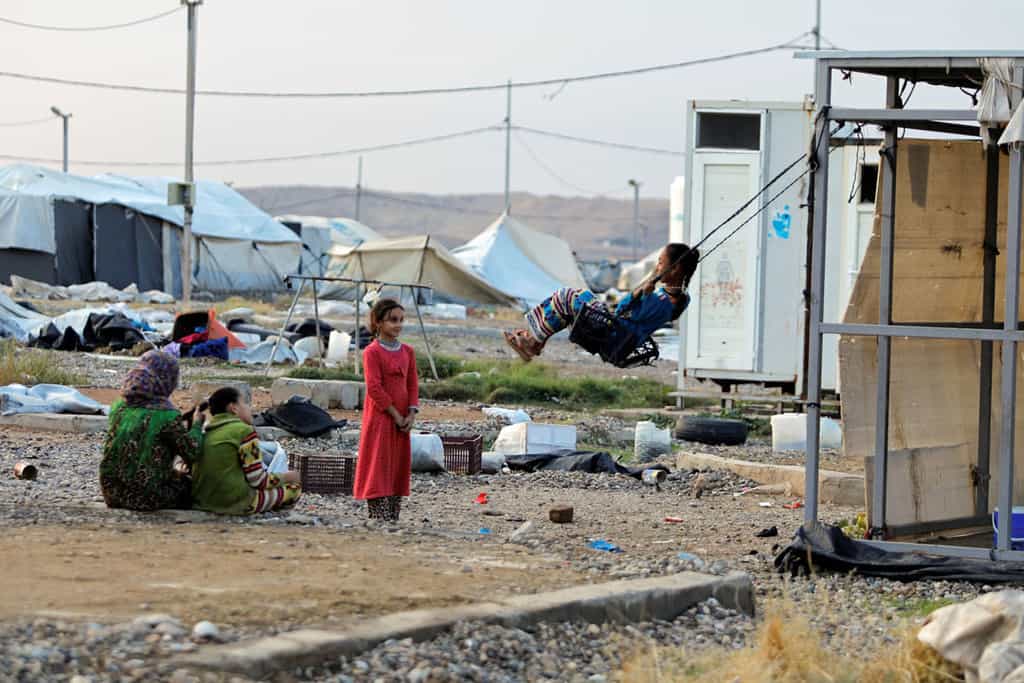 A girl near Mosul, Iraq, plays on a makeshift swing at Hammam Al-Alil camp where displaced Iraqis prepare to be evacuated Nov. 10, 2020. (CNS/Abdullah Rashid, Reuters)

Catholic and other faith-based agencies such as JRS, whose work was lauded by Biden as well as by Pope Francis during the online celebration, are on the front lines of the resettlement work, providing pastoral care, programs for psychosocial support in detention centers and refugee camps and for humanitarian relief, as well as helping refugees pave new paths in a new home.

JRS, which for four decades has provided education and livelihood programs so that resettled people develop skills and integrate into their new communities, received a letter from Pope Francis addressed to Jesuit Father Thomas H. Smolich, the organization’s international director, on the occasion of its milestone anniversary.

In it, the pontiff thanked staff and volunteers, offering special greetings “to the many men, women and children who seek refuge and assistance from JRS. May they and their families always know that the pope remains close to them and is praying for them!”

The pope wrote of his wishes that the agency continue “raising awareness of the plight of refugees and other forcibly displaced persons” and “extending the hand of friendship to those who are lonely, separated from their families or even abandoned.”

And that’s part of what many Catholic agencies that work to resettle refugees are involved with, Feasley said. It’s part of a spiritual legacy of helping the stranger, and one that the pope reminds Catholics of in his most recent encyclical “Fratelli Tutti,” she added. 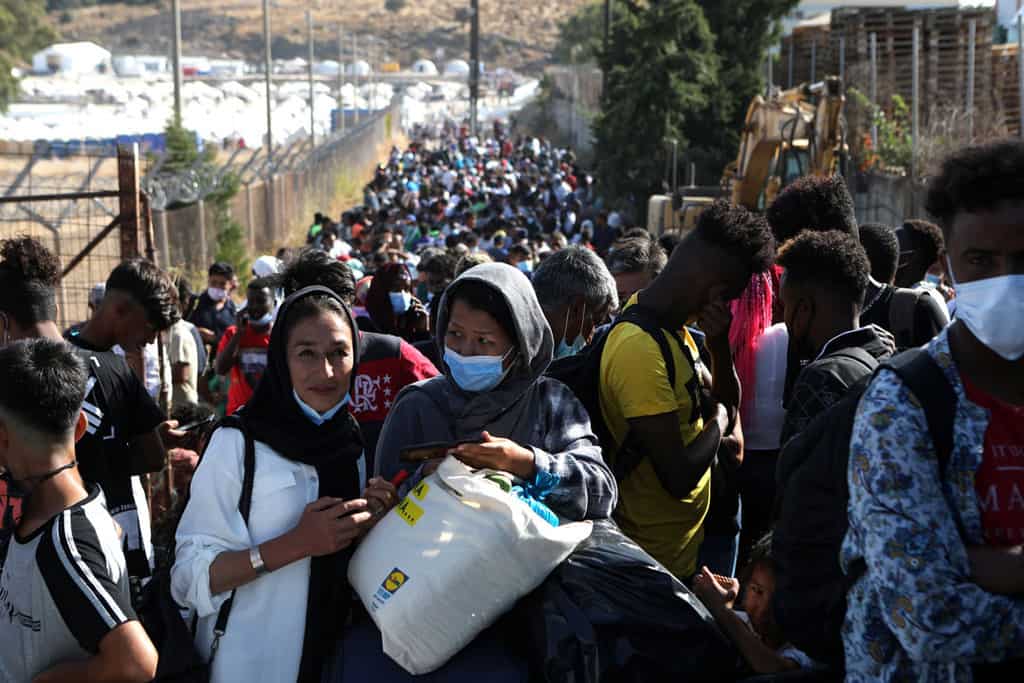 Displaced people from the destroyed Moria refugee camp on the Greek island of Lesbos line up to board a ferry to the mainland Sept. 28, 2020. (CNS/Elias Marcou, Reuters)

Returning to increased work of refugee resettlement is an opportunity to embrace the call of Pope Francis to “welcome, protect, promote and integrate” some of the most vulnerable among us, Feasley said.

“I see challenges but also opportunities to grow and maybe to do more work for Catholics to see how central this is to our identity as a global church,” she said.

The Catholic faith tradition has a long and noted history of being forced to be on the move, being refugees, but also of a people who are welcoming and who accompany others who are forced to leave, she said.

Feature image: A displaced child from the Moria refugee camp looks over a fence inside a new temporary camp on the Greek island of Lesbos Sept. 23, 2020. The Moria camp, which was mostly destroyed in fires Sept. 9, was home to at least 12,000 people, six times its maximum capacity of just over 2,000 asylum-seekers. (CNS/Yara Nardi, Reuters)