PHOENIX (CNS) — When Rosie Garcia, a parishioner of St. Augustine Cathedral in Tucson, heard the announcement that Pope Francis had formally recognized the heroic virtues of sainthood candidate Jesuit Father Eusebio Kino, she said she cried tears of joy.

“He was a man who led a virtuous life of love, hope and faith,” said Garcia, who is president of the Kino Heritage Society, a Tucson-based society working to promote the missionary priest’s cause in the United States.

Noting that Padre Kino is considered the “patron saint of the borderlands,” Garcia referred to him as “the voice of the underprivileged.”

On the recommendation of the Vatican Congregation for Saints’ Causes, Pope Francis formally recognized the heroic virtues of Servant of God Father Eusebio Kino July 10, officially elevating him to “Venerable” status, one more step on the road to canonization.

This step recognizes that a candidate heroically lived the theological virtues of faith, hope and charity and the cardinal virtues of prudence, justice, fortitude and temperance, and that he is worthy of public veneration and emulation. 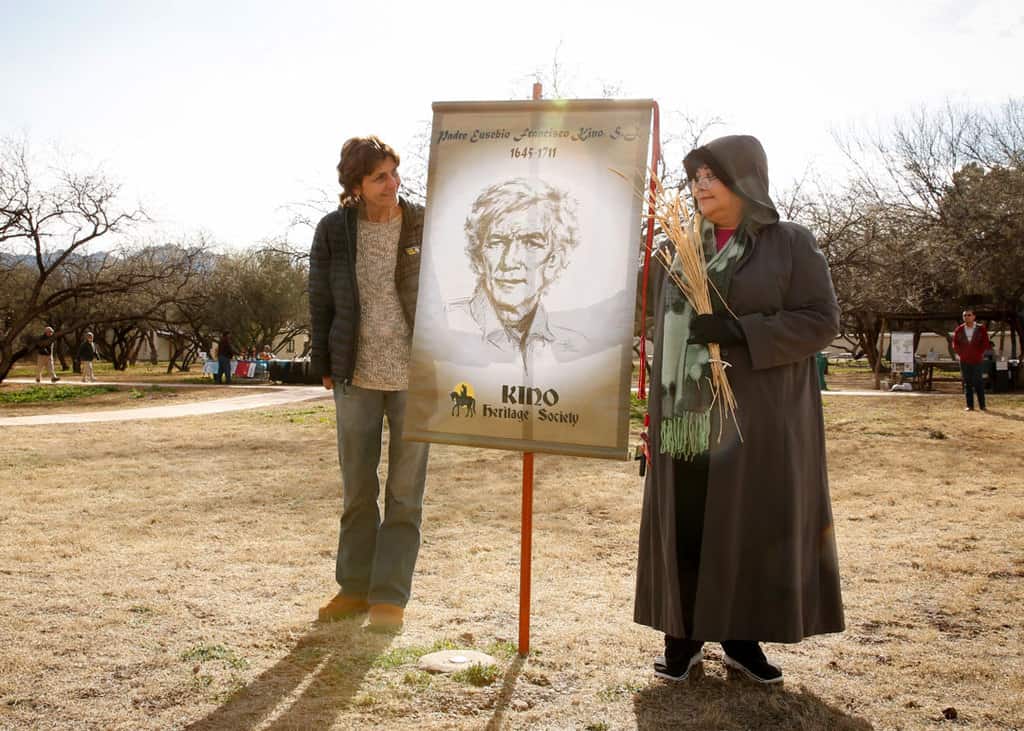 In this 2016 file photo, Carmen Dolny and Rosie Garcia, display a banner showing an image of Jesuit Father Eusebio Francisco Kino at the Tumacacori National Historical Park in Tumacacori, Ariz. Garcia is president of the Kino Heritage Society, a Tucson, Ariz.-based society working to promote the missionary priest’s cause in the United States. (CNS photo/Nancy Wiechec)
The Archdiocese of Hermosillo in the Mexican state of Sonora, is leading the cause for canonization, with the Diocese of Tucson, and Padre Kino’s native Archdiocese of Trent, Italy, is assisting.

“The history of the Catholic Church in Arizona is synonymous with the growth and history of the state of Arizona, and Padre Kino is one of the foundational figures in that great history,” said Phoenix Bishop Thomas J. Olmsted in a statement. “He remains a wonderful example of the mission of the Church lived in solidarity with the poor and marginalized.”

Padre Kino’s legacy in Arizona runs deep. A statue of the missionary represents Arizona in the U.S. Capitol’s National Statuary Hall; he is one of four Catholic priests represented in the hall, the others being St. Junipero Serra representing California; St. Damien de Veuster of Molokai, representing Hawaii; and Jesuit Father Jacques Marquette, representing Wisconsin.

Statues and memorials of Padre Kino dot Arizona, including Kino Park in Nogales, outside the Arizona History Museum in Tucson and in Wesley Bolin Plaza across from the Capitol in Phoenix. 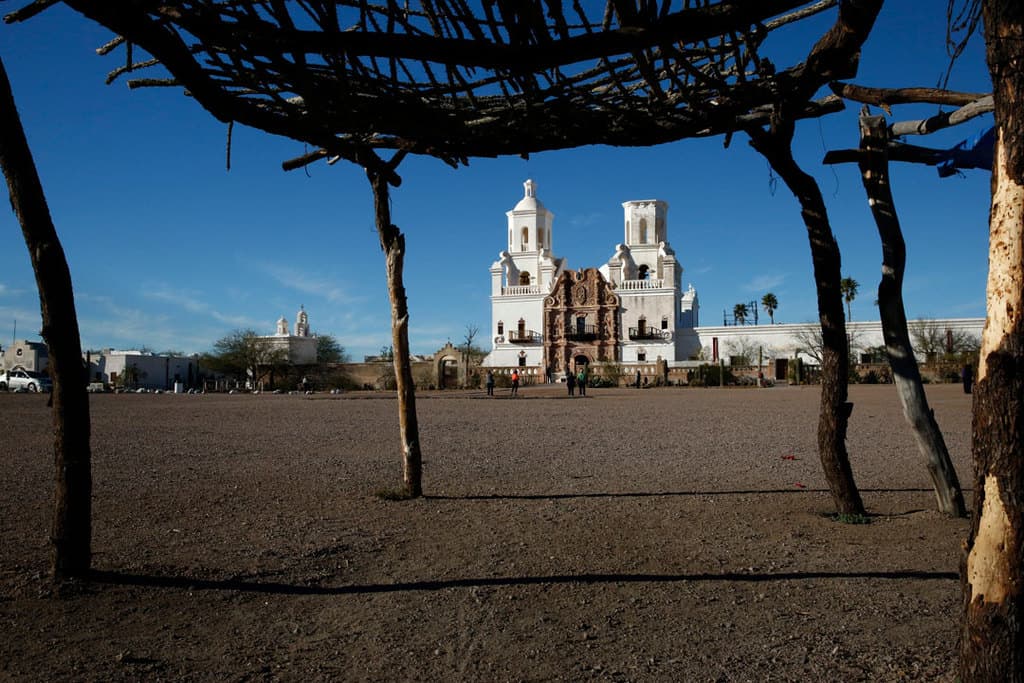 San Xavier Mission in Tucson, Ariz., founded by Jesuit missionary Father Eusebio Kino, is seen in this 2017 file photo. (CNS photo/Nancy Wiechec)
Jesuit Father Pete Neeley said the announcement is an affirmation of the work he does at the Kino Border Initiative, a Jesuit-run program named for Padre Kino whose mission is to promote immigration policies along the U.S.-Mexico border that affirm the dignity of the human person. The initiative has locations in both sides of the border in Nogales, Arizona and Nogales, Sonora.

“He wasn’t forcing cultures together with the sword, cannon or musket. He did it with his own spirituality. He tried to reconcile,” said Father Neeley, associate director of education for at the Kino Border Initiative. “He was concerned about people who didn’t know the Gospel.”

Born Eusebio Chini Aug. 10, 1645, in Segno, Italy, a small town in the Tyrolese Alps, he entered the Society of Jesus, or the Jesuits, on Nov. 20, 1665, after recuperating from a serious illness.

After his ordination June 12, 1677, he wanted to serve in the Far East, but was instead given the choice to serve in Spain or in the Spanish colonies, and he set out for Mexico in 1678.

Father Neeley recalled that in his research of Padre Kino, he learned that he had to come to the Western Hemisphere with falsified documents because there was already a quota on non-Spanish missionaries to board the ships.

“There is no record on any of the ships of anybody who came over here from Spain named Kino,” Father Neeley said. “He got papers made out for a Eusebio Chavez. He came over here using false documents to do a greater good, circumventing an unjust quota.”

Known as “the padre on horseback,” Father Chini, who Hispanicized his surname to “Kino” is believed to have traveled roughly 50,000 miles, and he became the first to map Pimeria Alta — an area that now includes southern Arizona and Sonora in northern Mexico. He led the Atondo Expedition to Baja California, believed at the time to be an island, until a drought in 1685 forced them to abandon the effort.

From there, he was assigned to Pimeria Alta in 1687 to work with the Tohono O’odham people.

The Jesuits couldn’t visit any Native village without an invitation. That invitation came in January 1691, when Padre Kino celebrated the first Mass in present-day Arizona at what is now the Tumacacori National Park in January 1691. From there he went on to establish the San Xavier del Bac Mission, just south of present-day Tucson, in 1692.

Because of his defense of the Native people, he made enemies out of many Spanish settlers who would mistreat the Natives and force them to work in mines.

“Kino was able to break laws in order to protect the indigenous people from the Spanish settlers who wanted to use them for slave labor,” Father Neeley said. “The law allowed them to do it, and Kino said, ‘No, you can’t do that.’ People didn’t like it.” 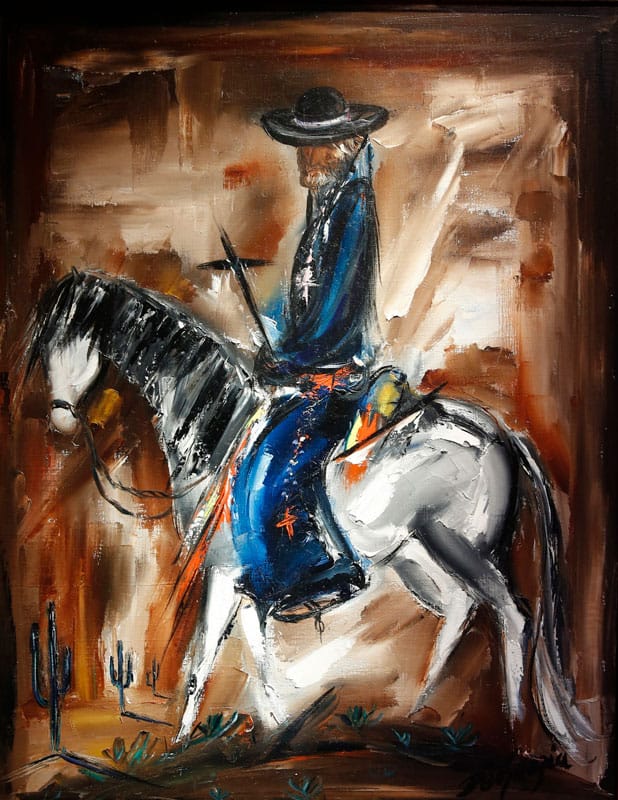 In this 2017 file photo, Jesuit Father Eusebio Kino is depicted on horseback by Ted DeGrazia in a painting that hangs at the late artist’s Gallery in the Sun in Tucson, Ariz. (CNS photo/Nancy Wiechec)

After a Pima uprising that killed fellow missionary Father Francisco Xavier Saeta in 1695, Padre Kino was able to broker peace. He wrote a biography of the protomartyr and delivered it to his superiors in Mexico City.

“It was more than a biography; it was a defense of the Native people,” said Mark O’Hare, a founding board member of the Kino Heritage Society and a parishioner at Sts. Peter and Paul in Tucson. “He did not pull any punches in saying it was the Spanish who were responsible for the uprising.”

Altogether, Padre Kino established 21 missions in what is now Arizona and Sonora, and helped the Jesuits return to California in 1697. O’Hare said that it was Padre Kino who laid the foundation that allowed St. Junipero Serra to continue north through California almost a century later.

St. Junipero, a Spanish Franciscan, is known for spreading the Gospel in the New World during the 18th century. He landed in Mexico, then made his way on foot up the coast of Mexico and to California, where he established a chain of missions that are now the names of well-known cities such as San Diego, San Francisco and Santa Barbara.

Padre Kino “had great love and charity. He had such hope and such a relationship with God that it didn’t matter if he got killed the next day,” said O’Hare. “He believed he needed to build the kingdom here on earth so people could get to the kingdom.”