Added to that this year, in a live-streamed format, were reminders that the most important conversations people can have are not with large groups of strangers, but with family and friends.

On the Black Lives Matter movement, for instance, author Olga Segura said, “I think private conversations are part of this work” for racial justice.

Segura believes there are similarities between the movement and the Catholic faith traditions of human life and dignity, and fighting for the vulnerable.

But she also acknowledged the movement is dogged by the misconceptions that it endorses violence, hates Christians and white people, and that the slogan “Defund the police” means eliminating all structures of law enforcement.

“Many faith leaders have internalized those misconceptions,” Segura observed, and “a lot of Catholics just don’t know where to get started.”

She suggested starting with the bishops, since in 2018, the U.S. Conference of Catholic Bishops issued a pastoral letter on racism, “Open Wide Our Hearts: The Enduring Call to Love.”

That document acknowledged systemic racism does exist and called for “a genuine conversion of heart, a conversion that will compel change, and the reform of our institutions and society.”

Segura asked the bishops to consider going further with documents that recognize the lasting damage of chattel slavery and predatory capitalism, as well as holding a forum “with people from the most marginalized communities. I think that’s a wonderful first step. Without that first moment of humility from our leaders, we won’t be able to move forward.”

“In order to change hearts,” she added, “we have to be intimate and vulnerable.” 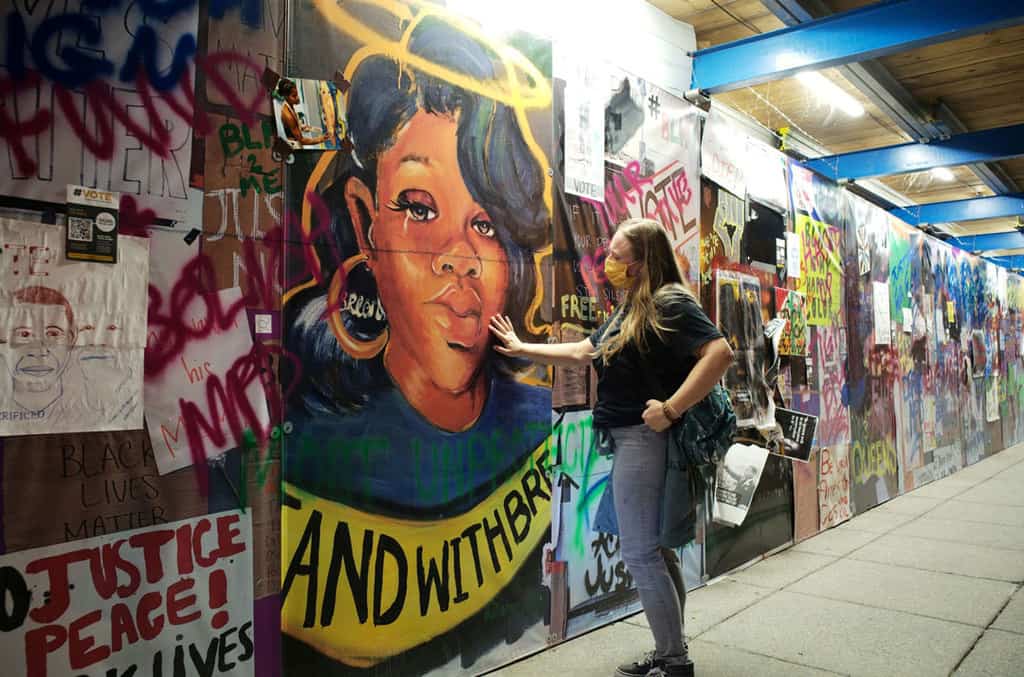 A woman in Washington touches a Breonna Taylor mural at Black Lives Matter Plaza on Sept. 24, 2020. (CNS/Cheriss May, Reuters)

In a session on immigration, Dylan Corbett, the founder of Hope Border Institute in El Paso, Texas, talked about the Trump administration’s restrictions, saying, “There was not a crisis of criminality at the border.”

In January 2019, the administration began enforcing “Migrant Protection Protocols” policy, known informally as “Remain in Mexico,” a plan that forces migrants who are seeking asylum in the United States to remain in Mexico while their asylum case is considered.

On Oct. 21, federal court filings revealed that the parents of 545 children who were separated at the Mexican border under the administration’s “zero tolerance” immigration policy have not been found. About 60 were under age 5 when they were taken from their parents.

“The most important thing we can do right now is voting, and having an immigration policy that’s up to date and comprehensive,” said Heidi Cerneka, a Maryknoll lay missioner and lawyer in El Paso.

And for people of faith, “We have to engage in real conversations and talk with everyone we disagree with.” Abdicating the federal government’s responsibility to treat immigrants humanely on the border “is not moral, and it’s not just.”

“There’s a rush to push cases through,” Cerneka said. With COVID-19 threatening lives in detention centers, “it’s almost impossible to talk to” those fortunate enough to have legal representation.

And it’s not just political threats building the surge, she pointed out. In 2008 worldwide, 21.5 million people were displaced by weather events, including hurricanes and earthquakes.

By 2050, she predicted, 250 million will be displaced by weather events as a result of climate change.

Featured Image: A little boy on the Mexican side of the border fence peers into El Paso, Texas, on the U.S. side in this November 2017 photo. (CNS/Rich Kalonick, courtesy Catholic Extension)