Belief in God as creator of all has consequences, pope says in new encyclical
By Catholic News Service
Oct 5, 2020
News
ShareTweet it!LinkedinEmailPrint
In ‘Fratelli Tutti,’ inspired by St. Francis of Assisi, pontiff calls on people to love each other, regardless of where they were born or live.
By Cindy Wooden , Catholic News Service

VATICAN CITY (CNS) — Professing faith in God as the creator of all human beings has concrete consequences for how people should treat one another and make decisions in politics, economics and social life, Pope Francis says in his new encyclical “Fratelli Tutti, on Fraternity and Social Friendship.”

“Human beings have the same inviolable dignity in every age of history and no one can consider himself or herself authorized by particular situations to deny this conviction or to act against it,” the pope wrote in his encyclical, which he signed Oct. 3 at the tomb of St. Francis of Assisi.

The Vatican released the more than 40,000-word text the next day.

The pope had been rumored to be writing an encyclical on nonviolence. Once the COVID-19 pandemic struck, many expected a document exploring in depth his repeated pleas for the world to recognize the inequalities and injustices laid bare by the pandemic and adopt corrective economic, political and social policies.

“Fratelli Tutti” combines those two elements, but it does so in the framework set by the document on human fraternity and interreligious dialogue that he and Sheikh Ahmad el-Tayeb, grand imam of al-Azhar Mosque in Cairo, Egypt, signed in 2019. 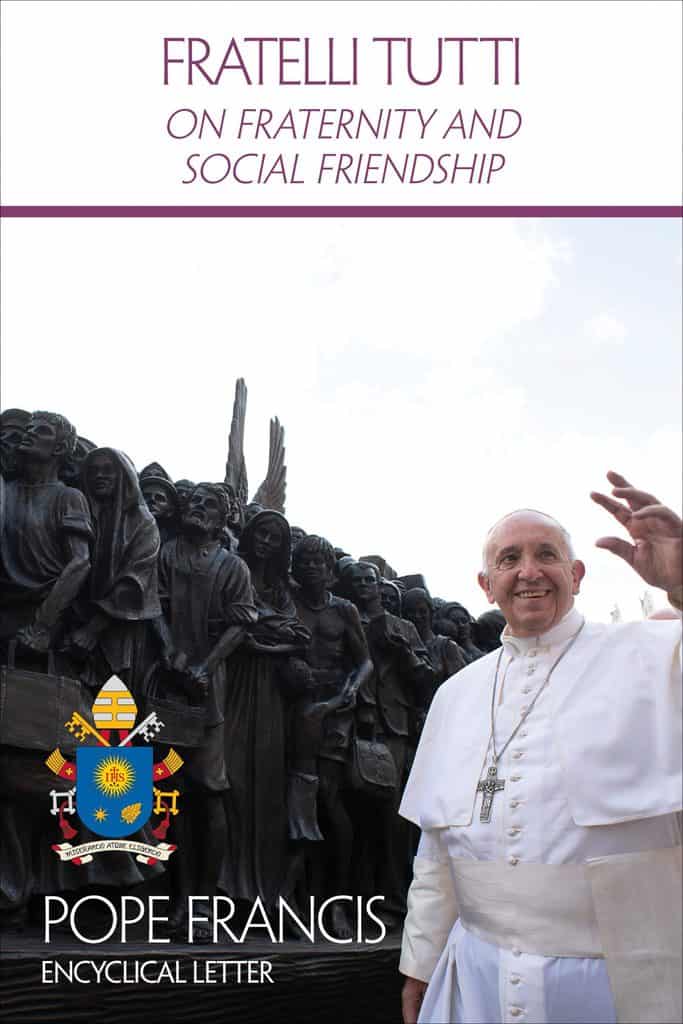 This is the cover of the English edition of Pope Francis’ new encyclical, “Fratelli Tutti, on Fraternity and Social Friendship.” (CNS photo/U.S. Conference of Catholic Bishops)
In the new document Pope Francis writes that he was “encouraged” by his dialogue with the Muslim leader and by their joint statement that “God has created all human beings equal in rights, duties and dignity, and has called them to live together as brothers and sisters.”

The encyclical takes its title from St. Francis of Assisi and is inspired by his “fraternal openness,” which, the pope says, calls on people “to acknowledge, appreciate and love each person, regardless of physical proximity, regardless of where he or she was born or lives.”

That flavor, explained throughout the document, involves welcoming the stranger, feeding the hungry, listening to and giving a hand up to the poor, defending the rights of all and ensuring that each person, at every stage of life, is valued and invited to contribute to the community, he says. It also means supporting public policies that do so on a larger scale.

Archbishop Jose H. Gomez of Los Angeles, president of the U.S. Conference of Catholic Bishops, welcomed the encyclical as “an important contribution to the church’s rich tradition of social doctrine.”

“Pope Francis’ teaching here is profound and beautiful: God our father has created every human being with equal sanctity and dignity, equal rights and duties, and our creator calls us to form a single human family in which we live as brothers and sisters,” the archbishop said in a statement. “God’s plan for humanity, the pope reminds us, has implications for every aspect of our lives—from how we treat one another in our personal relationships, to how we organize and operate our societies and economies.”

Building on the social teachings of his predecessors, Pope Francis’ document once again strongly condemns the death penalty and makes an initial approach to declaring that the conditions once used to accept a “just war” no longer exist because of the indiscriminately lethal power of modern weapons.

St. John Paul II in “The Gospel of Life,” published in 1995, cast doubt on whether any nation needed to resort to capital punishment today to protect its people; developing that teaching, Pope Francis in 2018 authorized a change to the Catechism of the Catholic Church to make clear that “the death penalty is inadmissible.”

Signaling the start of a similar effort to respond to the current reality of warfare, Pope Francis in the new encyclical raises the question of “whether the development of nuclear, chemical and biological weapons, and the enormous and growing possibilities offered by new technologies, have granted war an uncontrollable destructive power over great numbers of innocent civilians.”

“We can no longer think of war as a solution because its risks will probably always be greater than its supposed benefits,” one of the main criteria of just-war theory, he says. “In view of this, it is very difficult nowadays to invoke the rational criteria elaborated in earlier centuries to speak of the possibility of a ‘just war.’ Never again war!”

At the heart of the new encyclical’s appeal to Catholics is a meditation on Jesus’ parable of the good Samaritan and particularly on how Jesus takes a legal scholar’s question, “Who is my neighbor,” and turns it into a lesson on being called not to identify one’s neighbors but to become a neighbor to all, especially those most in need of aid.

“The parable eloquently presents the basic decision we need to make in order to rebuild our wounded world. In the face of so much pain and suffering, our only course is to imitate the good Samaritan,” the pope says. “Any other decision would make us either one of the robbers or one of those who walked by without showing compassion for the sufferings of the man on the roadside.”

“The parable,” he continues, “shows us how a community can be rebuilt by men and women who identify with the vulnerability of others, who reject the creation of a society of exclusion, and act instead as neighbors, lifting up and rehabilitating the fallen for the sake of the common good.” 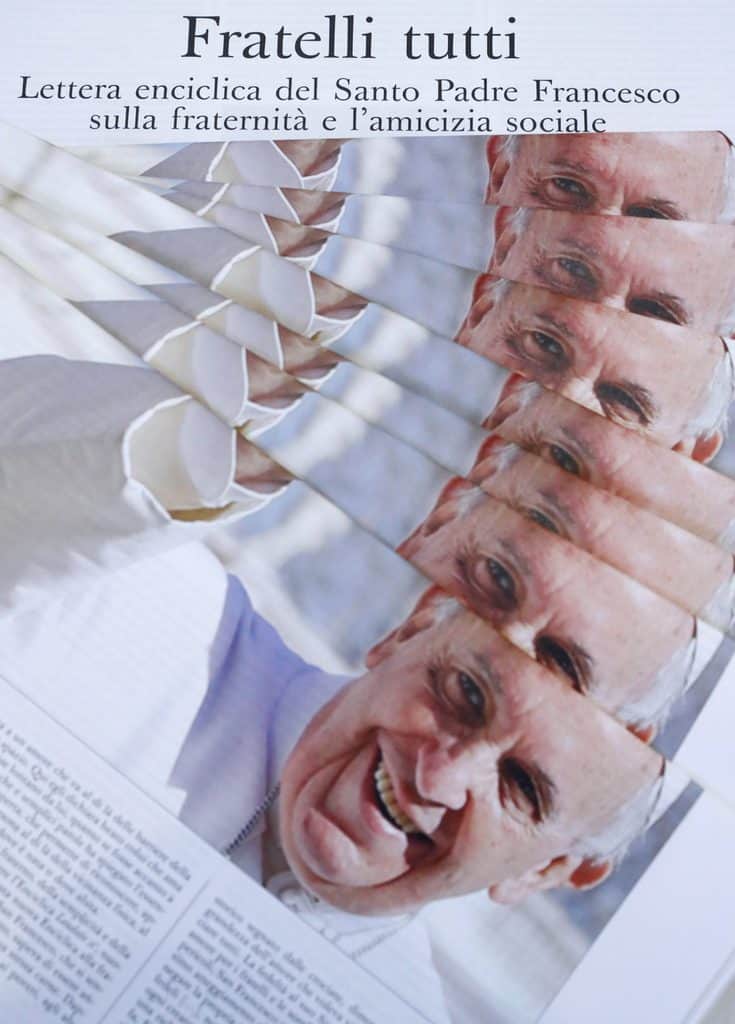 The front page of the Vatican newspaper L’Osservatore Romano shows Pope Francis with his latest encyclical, “Fratelli Tutti, on Fraternity and Social Friendship,” at the Vatican Oct. 4, 2020. (CNS photo/Remo Casilli, Reuters)
Pope Francis uses the encyclical “to consider certain trends in our world that hinder the development of universal fraternity” and acting as a neighbor to one another, including racism, extremism, “aggressive nationalism,” closing borders to migrants and refugees, polarization, politics as a power grab rather than a service to the common good, mistreatment of women, modern slavery and economic policies that allow the rich to get richer but do not create jobs and do not help the poor.

“The pain, uncertainty and fear, and the realization of our own limitations, brought on by the pandemic have only made it all the more urgent that we rethink our styles of life, our relationships, the organization of our societies and, above all, the meaning of our existence,” he says.

Anna Rowlands, a British theologian invited to help present the document at the Vatican, told Catholic News Service the text’s “golden thread” is about discerning “what gives life” and helps everyone to develop their full potential and flourish.

“The whole theme of the document is about the way in which we’re called to attend to the world as Christ attended to the world,” paying attention to reality rather than “evading it and avoiding it,” and praying for the grace to respond as Jesus would, she said.

Pope Francis calles for catechesis and preaching that “speak more directly and clearly about the social meaning of existence, the fraternal dimension of spirituality, our conviction of the inalienable dignity of each person and our reasons for loving and accepting all our brothers and sisters.”

He also uses the encyclical to strongly reassert a traditional tenet of Catholic social teaching: “the universal destination of goods” or “the common use of created goods,” which asserts, as St. John Paul said, that “God gave the earth to the whole human race for the sustenance of all its members, without excluding or favoring anyone.”

The right to private property, and the benefits to individuals and society of protecting that right, Pope Francis writes, “can only be considered a secondary natural right.”

“The right of some to free enterprise or market freedom cannot supersede the rights of peoples and the dignity of the poor, or, for that matter, respect for the natural environment,” the pope says. “Business abilities, which are a gift from God, should always be clearly directed to the development of others and to eliminating poverty,” especially through the creation of jobs that pay a living wage.

Pope Francis, Rowlands said, “wants to rehabilitate this idea of social friendship and social peace in the face of an all-pervasive social violence, which he sees running through the economy, running increasingly through politics, running through social media.”

The pope is not despairing, she said, but realistic. “He wants to offer a vision of how you begin from the most local, most every day and most concrete realities to build a culture of peace at every level.”