A Maryknoll brother teaches that love and dignity come from God.

During his years of teaching English in northern China, Maryknoll Brother Joseph Bruener has found a unique way to share God’s love with his university students.

He gives them a class exercise to write an affirmation about each of their classmates. “By the end, they have 24 positive statements (about themselves),” he says, adding, “Most students are grateful to have the opportunity to say something constructive about their classmates.“

Brother Bruener tries to highlight that everyone is deserving of love, “but not everyone has parents who love them, so they are going through life without that,” he says.

The 62-year-old missioner from Port Edwards, Wis., says the love and support his parents gave him and his four siblings nurtured his spiritual development. “Part of why I am a brother is to share the love they gave me,” he says. 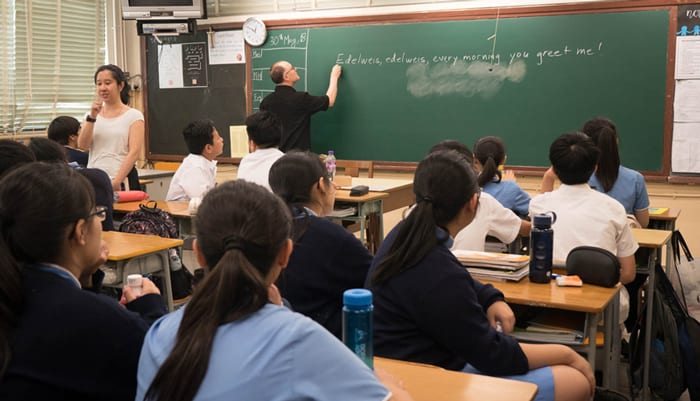 Brother Bruener credits reading Maryknoll magazine at home and his education with the Sisters of St. Francis of Penance and Christian Charity with igniting his love for mission. He was vice president of his high school mission club and helped raise awareness about the sisters’ mission in Taiwan.

That interest led him to a discernment retreat with Maryknoll in Guatemala in 1977 when he was a student at the University of Wisconsin-Stevens Point, majoring in English and drama for secondary school teaching. 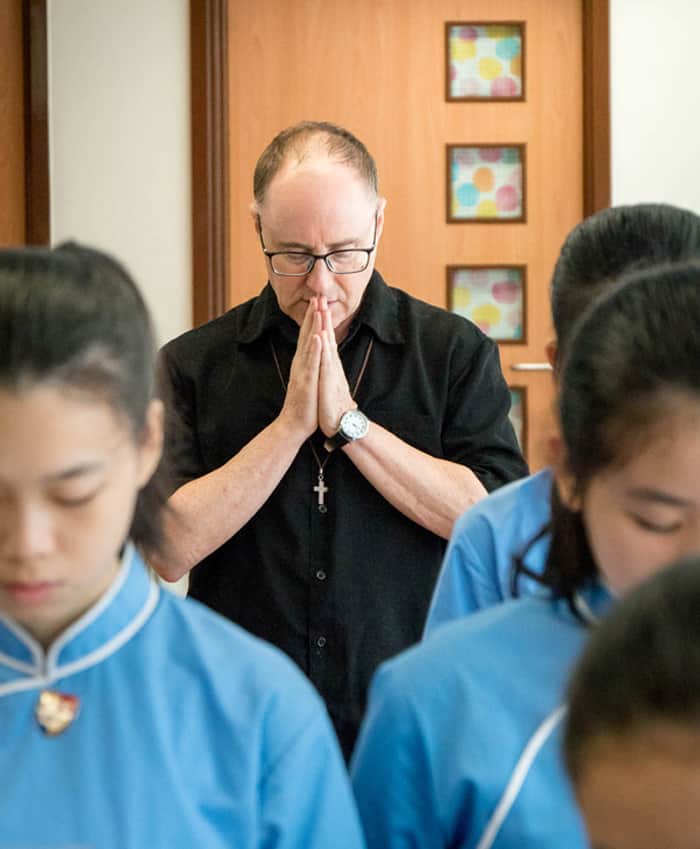 Brother Bruener prays alongside students in Hong Kong during a Marian celebration in May 2018. (Nile Sprague/Hong Kong)

Maryknoll Brother Wayne Fitzpatrick, who helped organize the retreat, recalls young Bruener as having a strong prayer life, an ability to form friendships and a healthy sense of humor. “I found Joe to be someone who was not afraid to engage, ask questions, step out of his comfort zone, and meet the people,” Brother Fitzpatrick recalls. “I think that might have been the teacher in him.”

While staying with Father Carroll Quinn in the Guatemalan village of Huehuetenango during the retreat, Bruener attended a First Communion. He recalls the three First Communicants dressed in their white dresses looking like angels amid the chapel’s dirt floors. “The Catholic Church gives people human dignity, no matter how poor their circumstances are,” he realized.

Though he felt called to religious life, Bruener put off his answer until after he graduated from college in 1981. He worked different jobs, including acting in Los Angeles, working at his father’s lumberyard in Wisconsin and teaching at Milwaukee public schools.

In 1989, he joined the Christian Brothers of St. Jean Baptiste de La Salle. “I never felt called to be a priest, to celebrate the sacraments, but I did want to be of service to the Church in other ways,” he says.

Two years later, when he discerned he was not called to be a teaching brother in a U.S. classroom, he remembered his initial love for overseas mission. He transferred to the Maryknoll Society and took his first oath as a Maryknoll brother in 1993.

He went to language school in Cochabamba, Bolivia, trained in Curico, Chile, and in Moho, Peru, and took his perpetual oath in 1998.

Then his focus switched to Asia. He studied Mandarin Chinese at the Maryknoll Language School in Taichung, Taiwan. 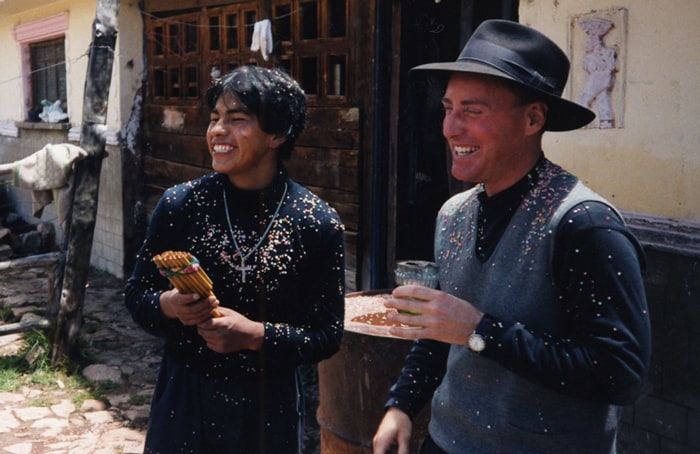 Joseph Bruener attended a language school in Cochabamba, Bolivia, and trained in Curicó, Chile, and in Moho, Peru,before making his perpetual oath in 1998. In this file photo he is in the highlands of Peru. (Maryknoll Mission Archives)

Brother Bruener arrived in Jilin in northern China in 1999, and spent years teaching English at Beihua—then a teacher’s college in Jilin—and at the city’s electrical college. He returned to the United States to work in vocation ministry and, later, on the initial formation team, to mentor new missioners in Chicago. After a year caring for his aging mother, he was reassigned to China in 2014, where he continued teaching English at Beihua University and at the local seminary in Jilin.

“Joe is extremely passionate about his ministry. He works very hard and takes whatever is asked of him very seriously,” says Brother Fitzpatrick. “He has been so consistent with living out his life with Gospel characteristics, human values. Whether in China or Chicago, wherever he is stationed, he lives that out in a very faithful manner.”

Brother Bruener recognizes that the trust people have in missioners is a great responsibility, one that the humble brother sometimes feels inadequate for. “You want to share God’s love with people and realize you have to trust the Holy Spirit,” he says.

In 2018, Brother Bruener moved to Hong Kong, where he served as a youth minister and chaplain at the Maryknoll Fathers and Brothers School and Maryknoll Secondary School. He also helped students practice English, one of the subjects they must excel at to get into college. “They have so much on their plate,” he says of the hardworking teenagers he met. “(Faith) has to be an invitation, not just another assignment for them.”

In February, while Hong Kong schools moved to online learning because of the COVID-19 pandemic, Brother Bruener started teaching online for Beihua. The mainland university had invited him back to teach poetry and business English. He hopes to teach in person soon, but for now he and his students have learned to be patient. “China is a very mountainous country, so sometimes the (online) connections go in and out,” he explains. “About 25-30 percent (of the students studying at home) are spread throughout the country. Many of them did not have a computer at home and were using their phone, so it was a challenge for them to participate in class.”

But the ups and downs of his new assignment are not deterring this teacher, who wants the best for his students. He says constant prayer helps him to be “a force for good” and a positive person.

His 27 years as a Maryknoll brother have transformed him, he says. He is continuously inspired by the Maryknoll brothers, who strive to use their God-given gifts in areas like healthcare, pastoral counseling, education, agriculture or spiritual direction.

Brother Bruener tells men who feel the invitation to Maryknoll brotherhood to call the vocations director. “It is a step by step process. It takes a lot of courage to make that initial contact,” he says. “But they would not regret having made the call.”