Weapons must be set aside for peace to flourish, pope says
By Catholic News Service
Aug 6, 2020
News
ShareTweet it!LinkedinEmailPrint

On the 75th anniversary of the nuclear bombing of Hiroshima, Pope Francis calls for peace

VATICAN CITY (CNS) — For peace to flourish, weapons of war must be set aside, especially nuclear weapons that can obliterate entire cities and countries, Pope Francis said on the 75th anniversary of the nuclear bombing of Hiroshima.

“May the prophetic voices” of the survivors of Hiroshima and Nagasaki “continue to serve as a warning to us and for coming generations,” he said in a written message sent Aug. 6 to Hidehiko Yuzaki, governor of the Hiroshima prefecture, who led a peace memorial ceremony.

The pope’s message and others were published on the Hiroshima For Global Peace website: hiroshimaforpeace.com.

In 1945, during World War II, the United States dropped atomic bombs on Hiroshima Aug. 6 and on Nagasaki Aug. 9 in an effort to get Japan to surrender. The cities were decimated and, by year’s end, at least 200,000 people had died from the blasts or the aftereffects.

Those who survived, called hibakusha, were honored at the Aug. 6 ceremony, and the pope greeted them as well as the organizers and others taking part in the ceremony. 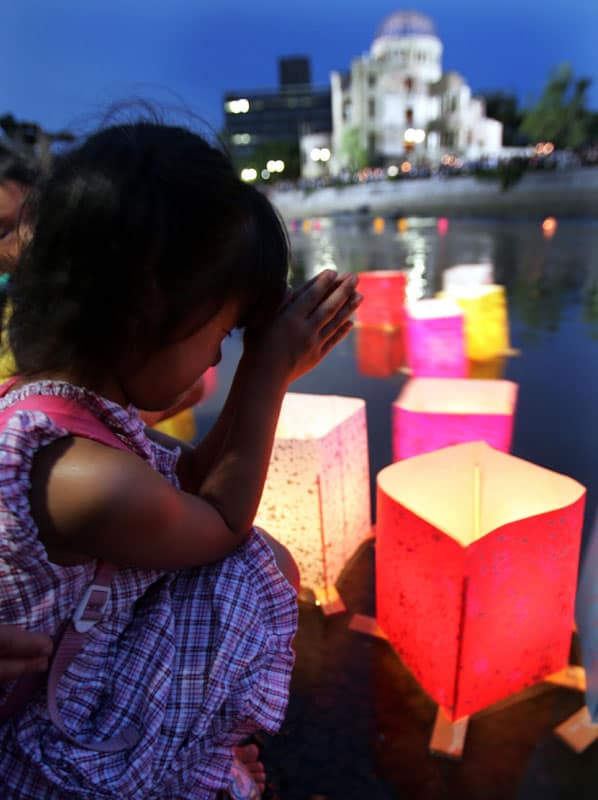 A girl prays after releasing a paper lantern on the Motoyasu River facing the gutted Atomic Bomb Dome in Hiroshima, Japan, Aug 6, 2020, the 75th anniversary of the U.S. dropping the atomic bomb on Hiroshima. (CNS photo/Yuriko Nakao, Reuters)

“I was privileged to be able to come in person to the cities of Hiroshima and Nagasaki during my apostolic visit in November last year, which allowed me to reflect at the peace memorial in Hiroshima and at Hypocenter Park in Nagasaki on the destruction of human life and property wrought in these two cities during those terrible days of war three-quarters of a century ago,” the pope wrote.

“I continue to hold in my heart the longing of the peoples of our time, especially of young people, who thirst for peace and make sacrifices for peace. I carry, too, the cry of the poor, who are always among the first victims of violence and conflict,” he said.

“It has never been clearer that, for peace to flourish, all people need to lay down the weapons of war, and especially the most powerful and destructive of weapons: nuclear arms that can cripple and destroy whole cities, whole countries,” the pope said.

Reiterating what he said in Hiroshima in 2019, Pope Francis wrote that the use of atomic energy for war and the possession of nuclear weapons are both “immoral.”

The pope ended his message with “abundant divine blessings” for all those commemorating on this “solemn anniversary.”

Featured image: The list of people killed is given to Hiroshima Mayor Kazumi Matsui from a representative of bereaved families of the 1945 atomic bombing victims at Peace Memorial Park in Hiroshima, Japan, Aug. 6, 2020, the 75th anniversary of the atomic bombing of the city. (CNS photo/Kyodo via Reuters)