MEXICO CITY (CNS) — The Nicaraguan bishops’ conference has called an arson attack on the Managua cathedral “an act of terrorism,” but vowed not to be intimidated as a government campaign of intolerance targeting the Catholic Church turns increasingly cruel and involves acts of sacrilege.

A still-unidentified assailant entered the cathedral’s Blood of Christ chapel July 31 and threw an explosive device, according to Cardinal Leopoldo Brenes of Managua. Flames engulfed the chapel, severely charring a 382-year old image of the crucified Christ.

“We condemn and reject such a violent and extremist act, typical of an act of terrorism, premeditated and planned to seriously offend our faith in Christ the redeemer and our Nicaraguan history and identity,” the bishops said in an Aug. 1 statement.

“We consider the profaning of our churches to be a manifestation of the violence and the great human, spiritual and cultural wound which afflicts those who still do not tolerate the message of peace and redemption that the church proclaims,” they said. 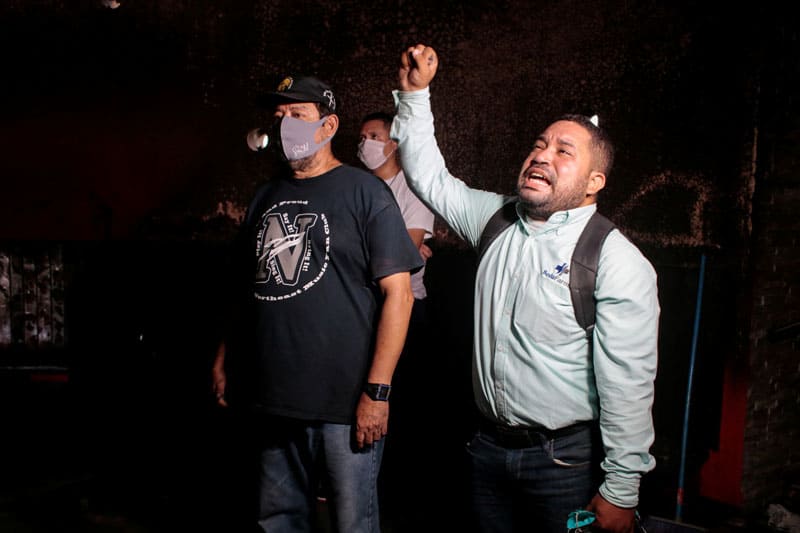 A man cries in the Blood of Christ Chapel at the Metropolitan Cathedral in Managua, Nicaragua, July 31, 2020, after the chapel was destroyed in an arson attack. (CNS photo/Oswaldo Rivas, Reuters)

At the Vatican Aug. 2, Pope Francis prayed for Nicaragua and said told people during his Angelus address: “I am thinking of the people of Nicaragua who are suffering because of the attack in the cathedral of Managua, where an image of Christ that is highly venerated, that has accompanied and sustained the life of the faithful people for centuries, was greatly damaged, almost destroyed.”

Cardinal Brenes told media July 31 that the suspect was seen circling the cathedral for more than 20 minutes. He entered the cathedral and said, “I come to the Blood of Christ,” reported Nicaraguan media. He tossed the explosive device and fled, escaping the property through a gate that had recently been robbed.

“He calculated everything,” Cardinal Brenes said, “where to enter, how to do it and, later, how to escape. This was truly planned.”

The attack was the latest on the Nicaraguan Catholic Church, which has found itself coming into opposition with the country’s Sandinista government.

In recent years, the church tried convening peace talks. It protected protesters being assailed by police and paramilitaries and had its parishes besieged for accompanying the families of political prisoners. It also had its COVID-19 prevention programs shut down by a government that denies the disease’s dangers and encourages people to continue normal activities. 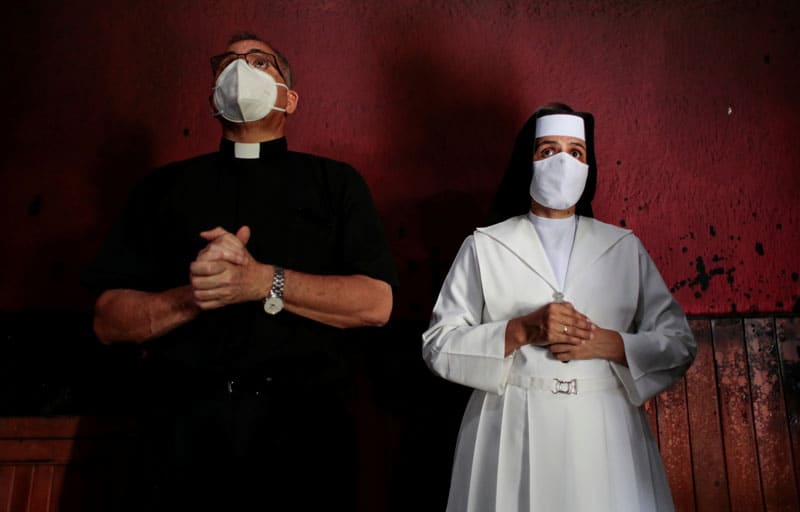 A priest and nun pray in the Blood of Christ Chapel at the Metropolitan Cathedral in Managua, Nicaragua, July 31, 2020, after was it destroyed in an arson attack. (CNS photo/Oswaldo Rivas, Reuters)

“In recent years, the church has been at the side of the people’s just demands and the defense of human rights,” said Msgr. Carlos Aviles, Managua archdiocesan spokesman. “There’s repression, persecution, hatred of the church; but we’re going to continue.”

The firebombing of the cathedral was but one of at least three attacks on churches in Nicaragua within days, said Msgr. Aviles, who reported police parked outside his parish and took photos during Mass in an attempt at “intimidation” Aug. 2.

Mass was interrupted in the Santa Rosa del Penon parish in the Diocese of Leon the evening of Aug. 2 as an intruder began throwing stones at the priest and glass could be heard shattering, according to video uploaded to social media.

The Managua cathedral was temporarily occupied and profaned by pro-government thugs in November 2019, when mothers of political prisoners were inside holding a hunger strike.

“Those who think that with these acts of terror they will intimidate the church are mistaken. Christ Crucified is our strength, our comfort and our hope,” tweeted Auxiliary Bishop Silvio Jose Baez of Managua.

“United in him we will continue announcing the Gospel of peace, crying alongside the people and consoling them, accompanying them in their efforts to achieve the birth of a new society,” Bishop Baez continued. “The Blood of Christ destroyed by a terrorist act in the Managua cathedral is a live memory of a God who carried our suffering to the cross and continues suffering.”

Featured image: A crucifix is seen in the Blood of Christ Chapel at the Metropolitan Cathedral in Managua, Nicaragua, July 31, 2020, after was it destroyed in an arson attack. (CNS photo/Oswaldo Rivas, Reuters)